The year 2018 will go down as one for the ages. Every major asset class and equity market around the world declined. After 9 consecutive years of gains, the S&P500 dropped 4.4% last year. For our part, we produced positive results of 2% despite the environment. Since our inception in 2010, the S&P500 is up 11.7% annualized and the Alamar equity strategy is up 12.7% during the same timeframe.

While corporate profits, the primary driver of equity returns, are estimated to grow once again in 2019, there are some clouds on the horizon. We will explore some of these in this note as well.

Last year was a difficult year for most investors. Every major asset class lost money. It didn’t matter whether the company was small, large or in-between; developed countries and emerging markets were both down. Fixed income was no different – investment grade and junk bonds (non-investment grade) were both in the red. Commodities were down across the board, including old safe havens such as Gold. Table 1 depicts the performance of different assets for 2018. 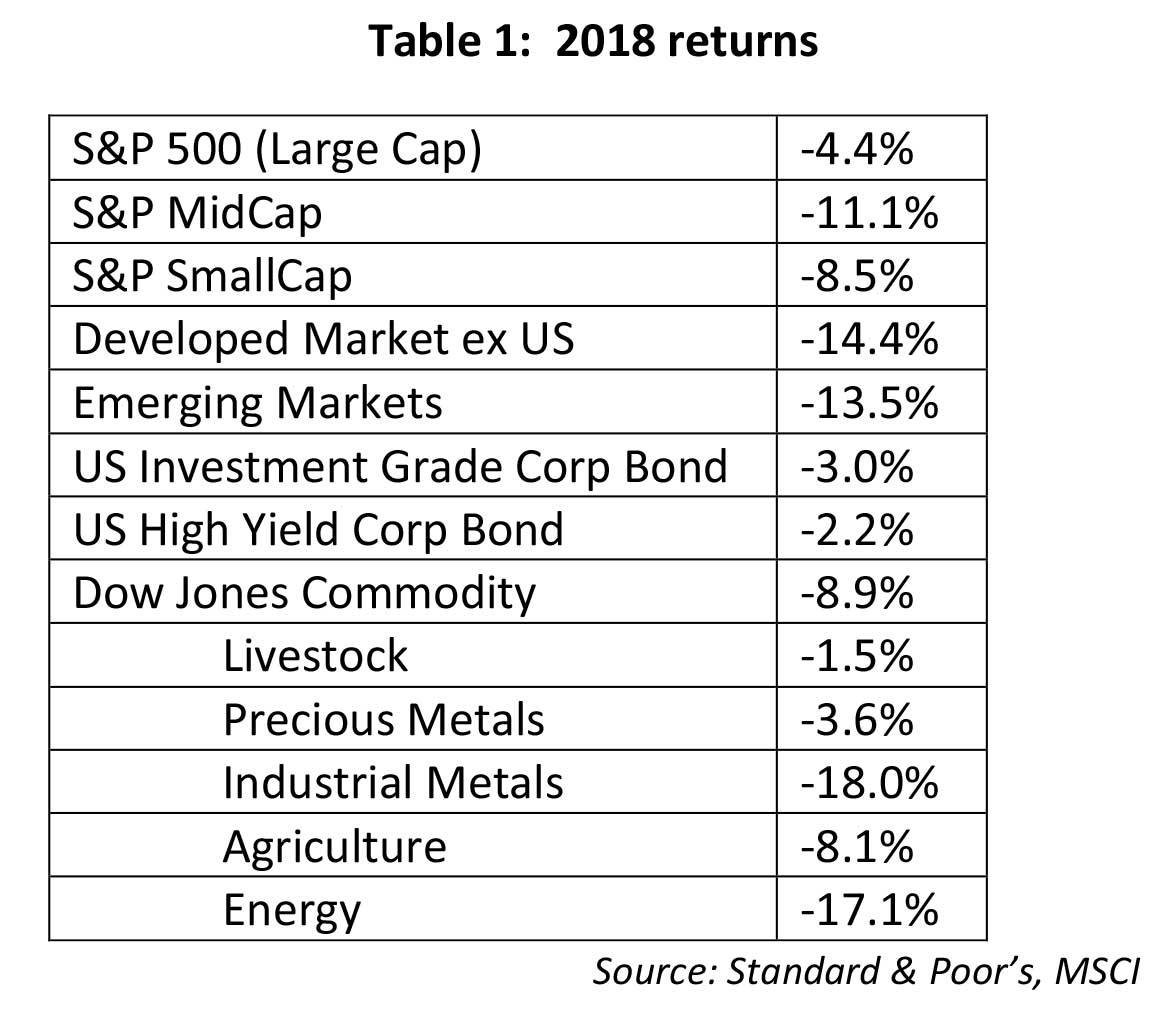 At Alamar, we did better than market benchmarks and most managers. While many of our investments did well for us, acquisitions played a significant role. After some period of drought, two of our long-term investments, Buffalo Wild Wings and Red Hat Software were acquired for large premiums. We purchased the restaurant chain Buffalo Wild Wings in 2011 for $66 in our client accounts and have held the stock since then. The buyout earned us a 137% return when it closed in February 2018. We purchased the software company Red Hat for $56 in 2014 and, once IBM completes its purchase, we will have received a 335% return on our investment. So far 10 of our investments have been acquired for significant premiums. We expect a lot more in the future.

OUTLOOK FOR THIS YEAR

As we have written about in prior notes, there are a number of headwinds facing economies around the world. The bull market in the US, now in its 10th year, is entering its later stages. We estimate all the growth in nominal US GDP in 2018 was driven by budget deficits. Nominal GDP grew by roughly $800 Billion last year while US federal debt increased $1.2 Trillion! Figure 1 plots total federal debt to GDP. To see such large increases in debt during an economic expansion is problematic. 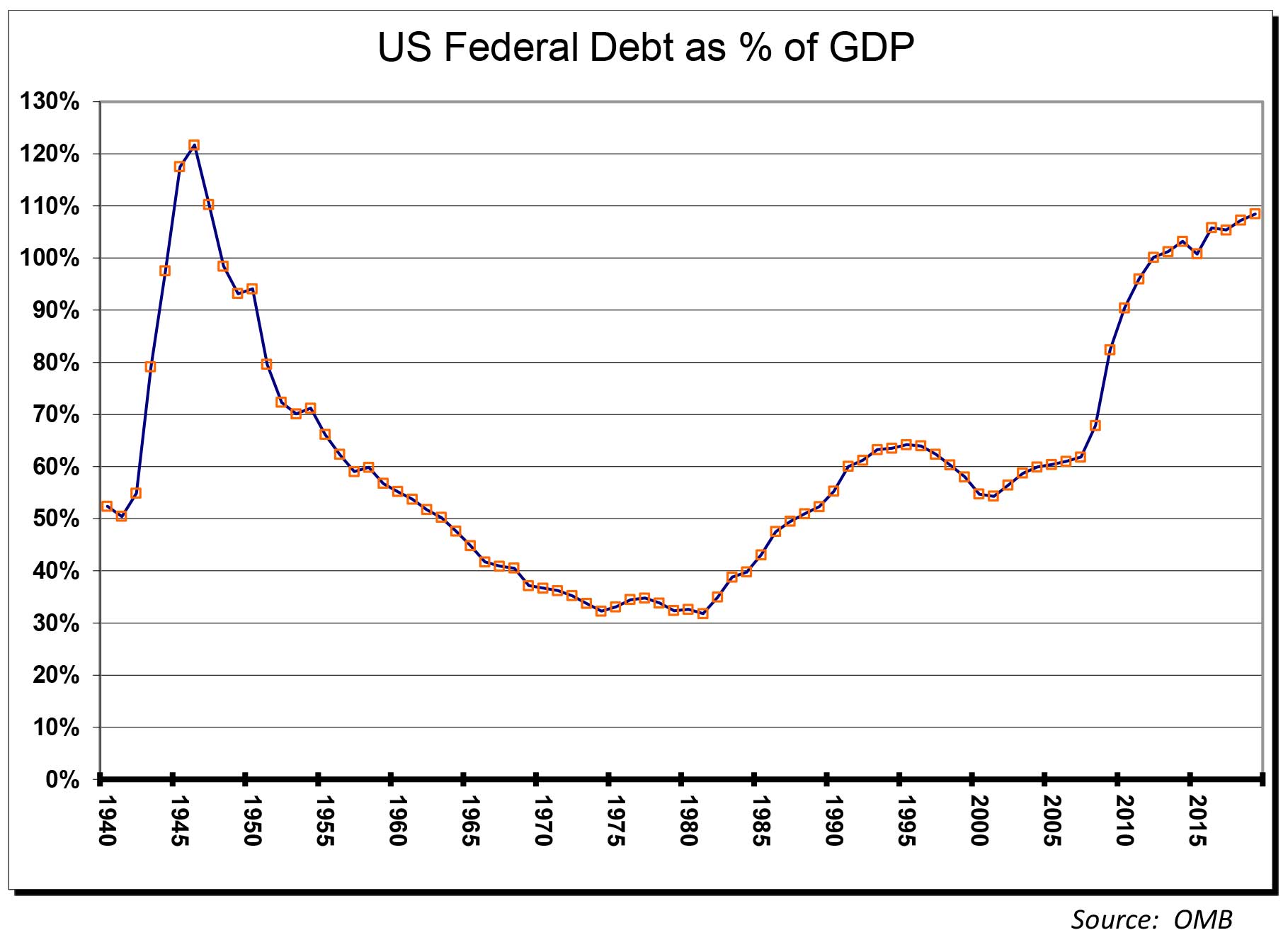 Growth in Europe is anemic and countries such as Italy and France continue to grapple with large government debt and deficits. Brexit adds another large dose of uncertainty. China is facing the twin headwinds of trade frictions and a large debt overhang. Despite having no investments in China, we monitor numerous signals to track the Chinese economy and many of these are now flashing red. We are carefully monitoring the outcome of the US-China trade talks and what companies are doing to restructure their supply chains. A large shift of manufacturing out of China to other emerging markets such as Malaysia and Vietnam will have a long-term detrimental effect on Chinese growth in our estimation.

In the US, one of the primary drivers of consumer wealth, house prices, is starting to stall and possibly decline. We track a basket of home builders and have noticed a sharp deceleration in prices obtained for new homes sold. Figure 2 depicts growth in new house prices over the last 2 decades. 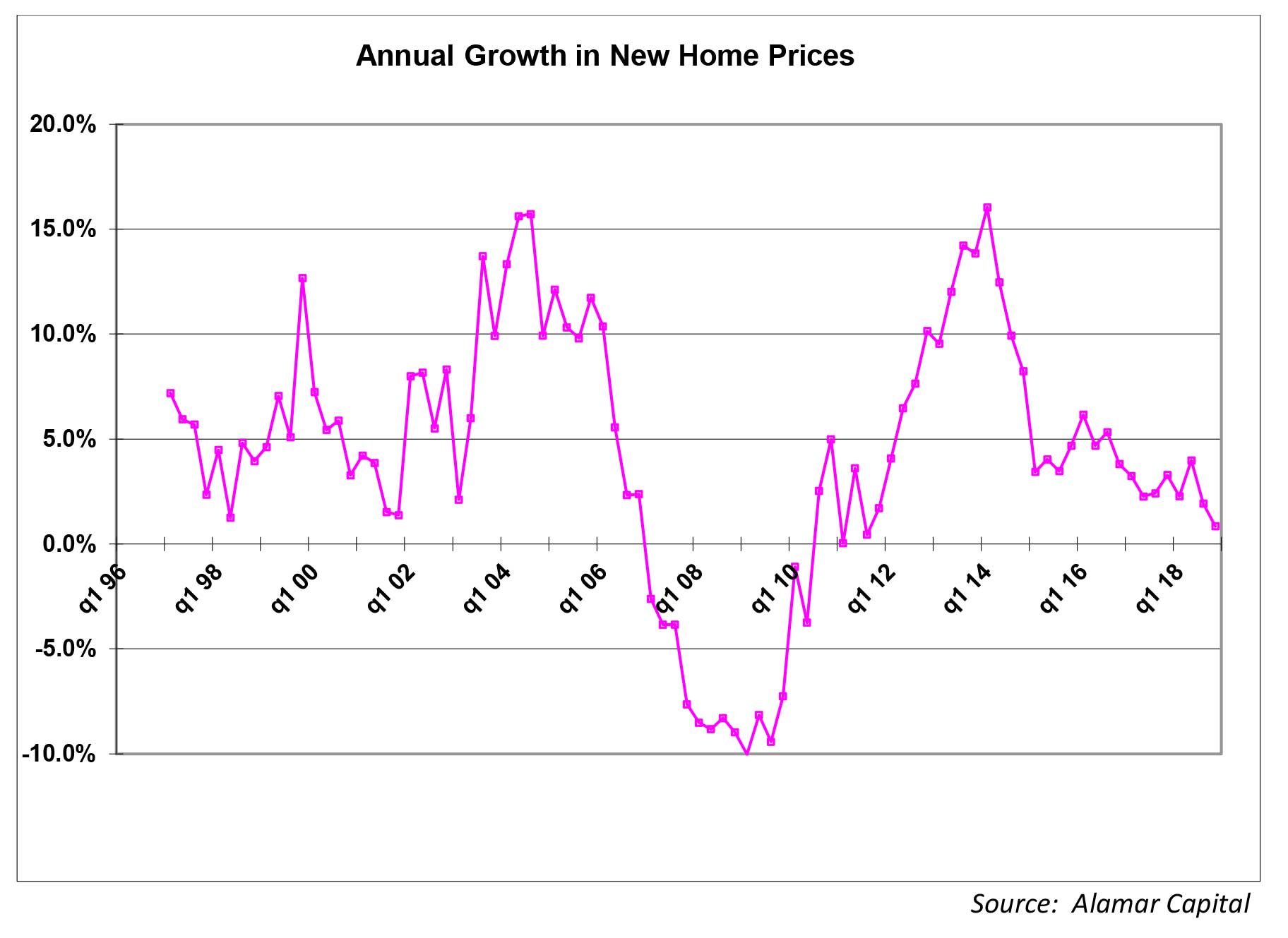 As seen in the figure above, growth has decelerated to the lowest since the start of the housing recovery in 2011. If present trends continue, we expect home prices to decline this year. Similarly, auto sales, another large consumer item, have also slowed considerably. It remains to be seen if these trends will persist or get worse. While market prices reflect some of these concerns with the recent correction, caution is warranted.

A new year brings a new set of obstacles to overcome. The economy faces numerous headwinds ranging from higher interest rates and trade disputes to yet another government shutdown. After a decade-long bull market, we see some signs of a slowdown in profit growth and are cautious about deploying capital. The market, however, is also worried about the very same issues and has priced itself accordingly. Valuations have come down considerably over the last 3 months as prices corrected. As the new year unfolds, we will, as always, continue to search for well-managed companies with good growth trading at reasonable valuations.

his publication is made available for informational purposes only and should not be used for any other purpose. In particular, this report should not be construed as a solicitation of an offer to buy or sell any security. Information contained herein was obtained and derived from independent third-party sources. Alamar Capital Management, LLC believes the sources are reliable; however, it cannot guarantee the accuracy of such information and has not independently verified the accuracy or completeness of such information.