After all the handwringing about the presidential elections, Europe, and the fiscal cliff, the markets performed admirably in 2012. The S&P500 was up 16.1%, substantially above long-run returns and more than twice the growth of overall corporate profits and gross domestic product (GDP). We were up roughly 12% last year, net of fees. Our shortfall was entirely from our lack of exposure to banks (up roughly 30%) and Apple (up 33%). Since inception three years ago, we are up over 51%, cumulatively, while the S&P500 returned 36%.

Given the intense focus on government budgets we will spend some time in this writing on fiscal affairs. We will also look at the employment picture and compare our current situation to past cycles.

The economy, to the extent we can fathom, is recovering, albeit at a very moderate pace. Figure 1 below plots the job picture including the December 2012 release. The recovery that began in 2010 continues on pace. We have now passed the employment peak of 2001. If we continue on the current trajectory we will pass the 2008 employment peak in a little over two years. However, this recovery is quite anemic compared to the prior two. Figure 2 plots the pace of job growth from the inception of each cycle. Despite the large fiscal and monetary stimuli the gap between the current cycle and the previous two is beginning to widen. 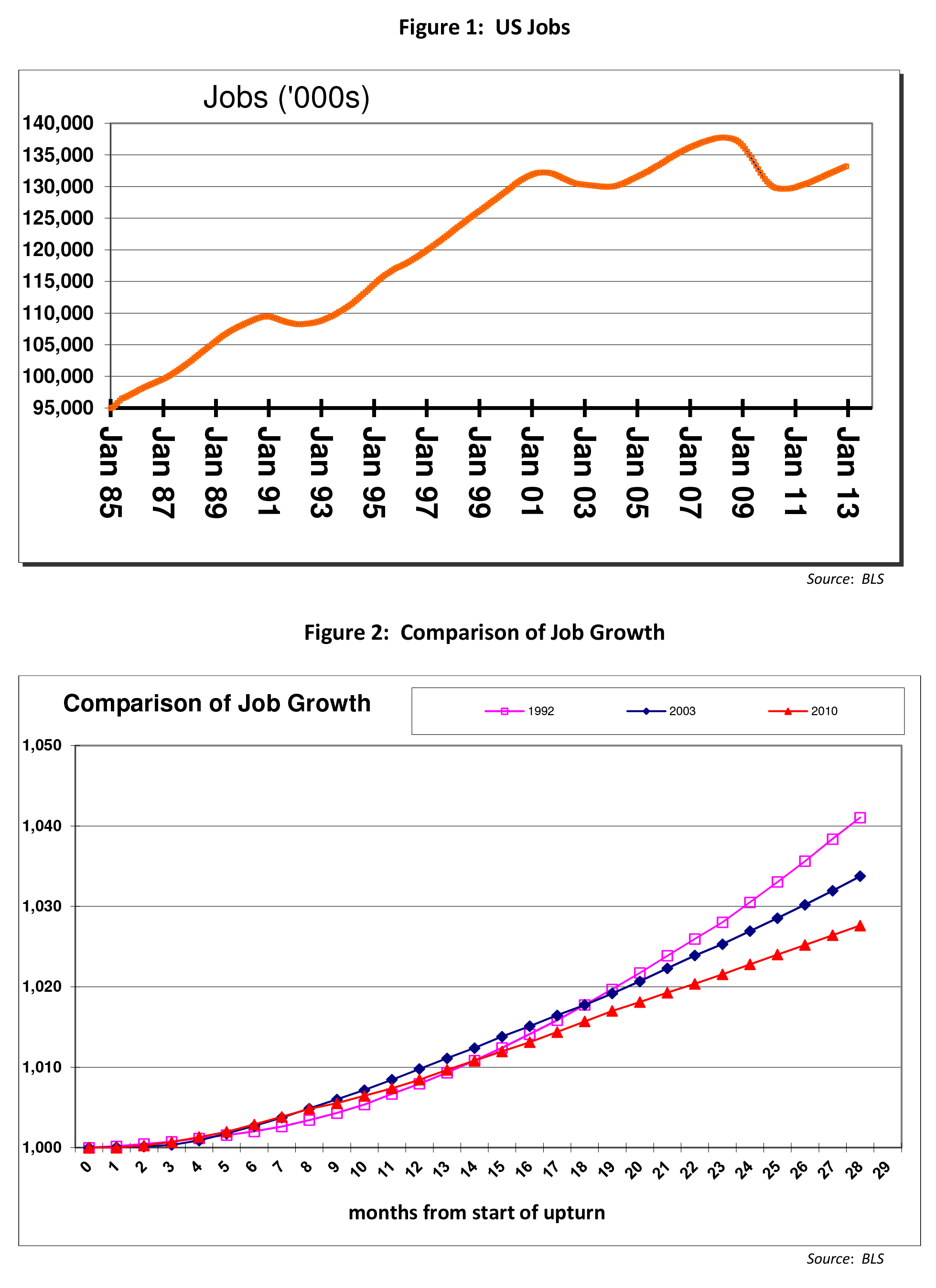 DO WE HAVE A DEAL?

The bigger overhang on the economy and for investors is the fiscal cliff and debt limit negotiations. The fiscal cliff seems to have been temporarily forestalled by increasing taxes on the wealthy and capping spending until next month. The primary differences between the two sides are the levels of taxation and spending by the federal government. We believe we are well on our way to resolving these issues.

Figure 3 plots the receipts (taxes, social security and Medicare) of the federal government as a percentage of the overall economy (GDP) post WWII. The historical average, as shown by the dotted blue line, has been 17.5%. Receipts fall during recessions and rise as the economy recovers. During the recent Great Recession receipts bottomed at 15.1% in 2009 and are now beginning to recover. Receipts in 2013 are expected to reach the long-term average of 17.5%. 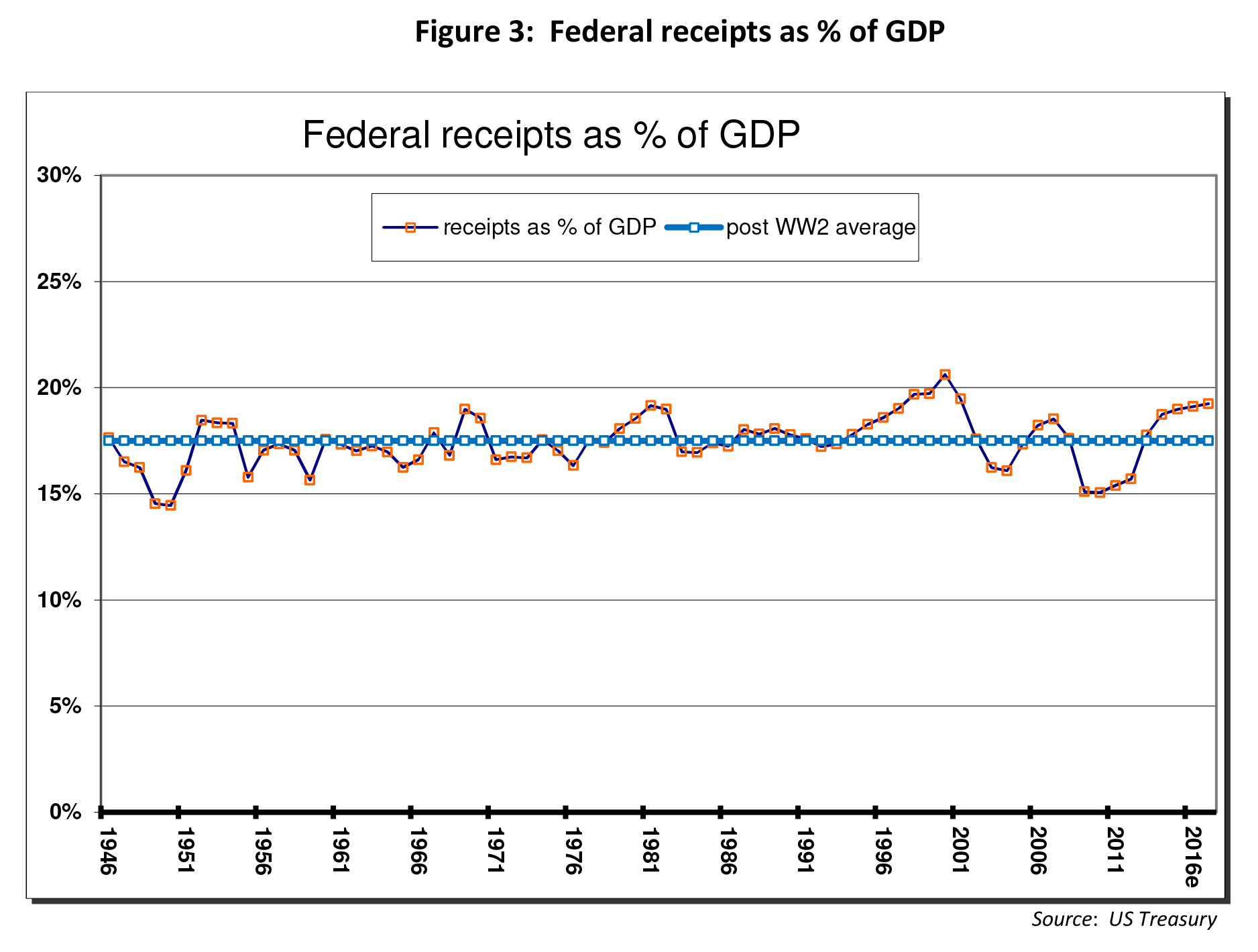 Figure 4 plots the other side of the coin, spending. In contrast to receipts, spending typically rises during recessions as the government attempts to offset the drop-off in aggregate private sector demand with stimulus. In 2009, spending spiked to a post-WWII high of 25% of GDP as Keynesian doctrine kicked into high gear. Spending drops off as the economy begins to recover and the private sector picks up the slack. Historically, post WWII, total federal spending has averaged 19.2% of GDP as shown by the red line. Figure 4 plots two trajectories of future spending. The blue line depicts the projections as defined by the most recent treasury budget.

However, the US Congress, in particular the House of Representatives, has refused to sign off on spending increases. As a result, the actual spending, as shown in Figure 5, has remained constrained due to the budget stalemate. Since mid-2009, federal spending has flat-lined at roughly $300 Billion monthly. If this spending restraint continues going forward then spending as a percentage of GDP will follow the trajectory as shown by the green line in Figure 4. In two years, spending will fall back to historical averages and then fall below, provided we continue on the current track! 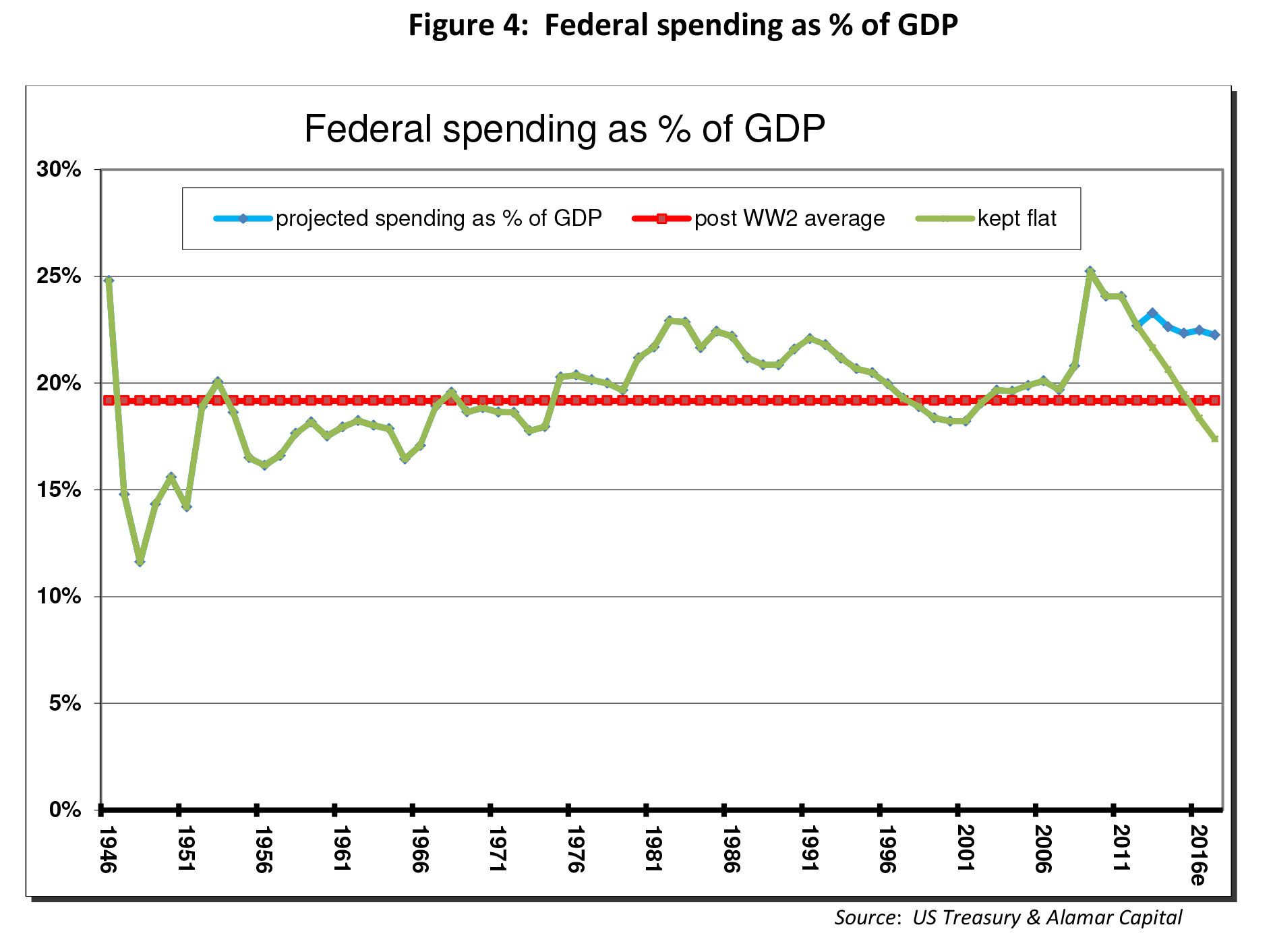 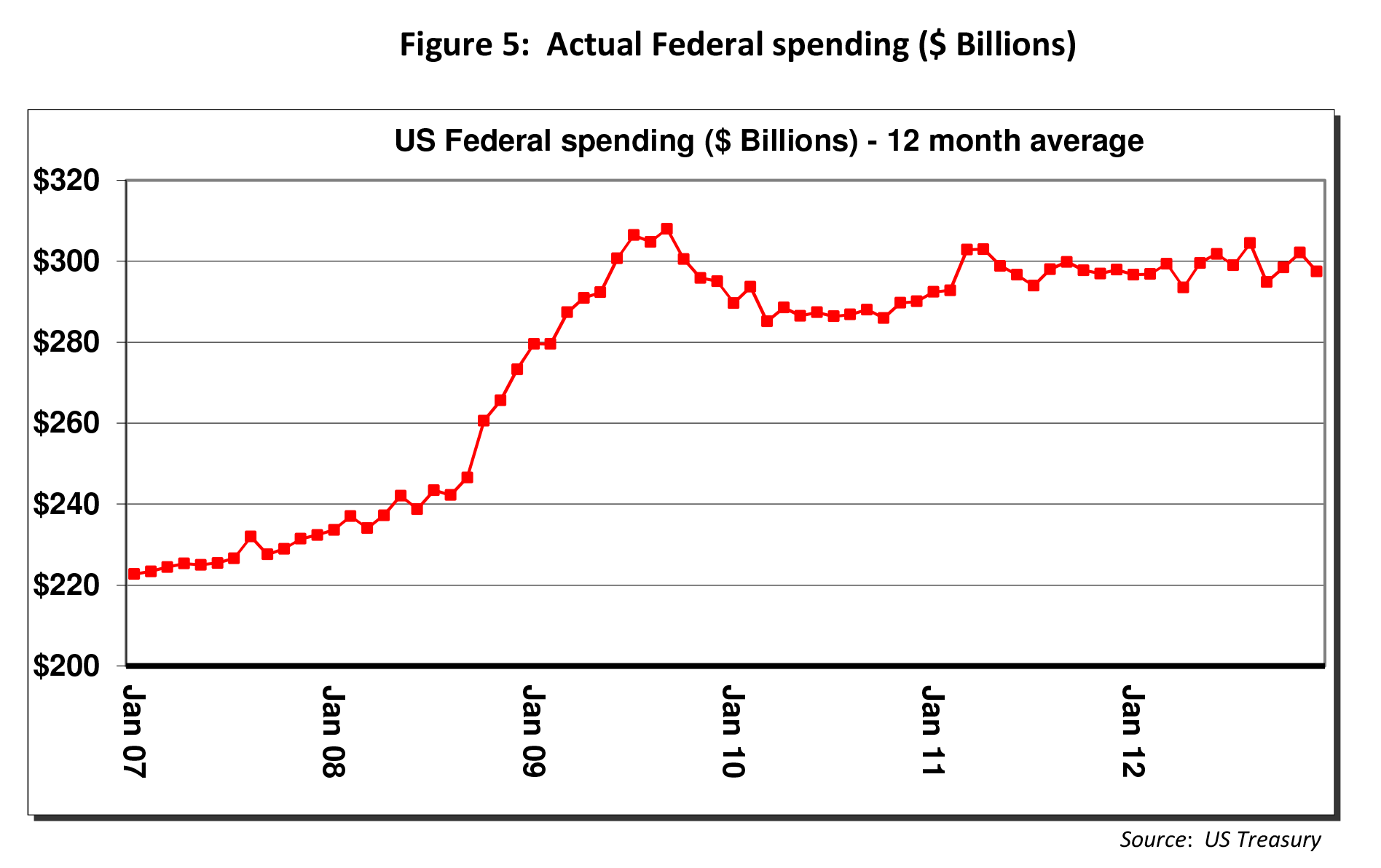 The economy is slowly picking up pace as exhibited by moderate job growth. The recovery, thus far, has been sub-par compared to previous recoveries. According to research from Carmen Reinhart and Kenneth Rogoff, this is par for the course following recessions caused by financial crises.

The budget brouhaha in Washington, the focus of everyone’s attention, is from our vantage point, on the mend. Paradoxically, the stalemate in Congress is actually helping to improve the fiscal situation by keeping spending in check as tax receipts improve with the growing economy.

While we are a tad more constructive on the equity market from our previous quarterly missive, we are not ready to call the all-clear. Continuing outflows from the equity market is a good sign since that keeps expectations in check. However, corporate earnings growth is anemic which makes us a bit cautious.

Thank you for your continued consideration of our firm.

The views expressed in this note are as of the date initially published and are subject to change
without notice. Alamar has no obligation or duty to update the information contained in this
note. Past performance is not an indication of future results. Risk is inherent in investments
and involves the possibility of loss.

This publication is made available for informational purposes only and should not be used for
any other purpose. In particular, this report should not be construed as a solicitation of an
offer to buy or sell any security. Information contained herein was obtained and derived from
independent third-party sources. Alamar Capital Management, LLC believes the sources are
reliable; however, it cannot guarantee the accuracy of such information and has not
independently verified the accuracy or completeness of such information.

This publication, and the information contained herein, may not be copied, reproduced,
republished, or posted in whole or in part, in any form or media without the prior written
consent of Alamar Capital.