The S&P 500 achieved a 3.9% return in the quarter, with virtually all the gains coming in the month of July, as both August and September were basically flat. On the whole, the S&P has provided investors a 7.8% return on the year.

At Alamar, our equity strategy was up 2.6% on the quarter and 2.4% on the year, both returns lagging the overall market. As with many active managers, we have had a tough time keeping up with the broader markets in recent months. However, we maintain our advantage since our inception on January 1st, 2010 with a 13.4% annualized net of fees return against a 12.7% return for the S&P.

The Chart below reflects a change of course for the market in the quarter towards growth oriented sectors such as technology, while high dividend paying sectors like staples, telecom, and materials gave back some gains. 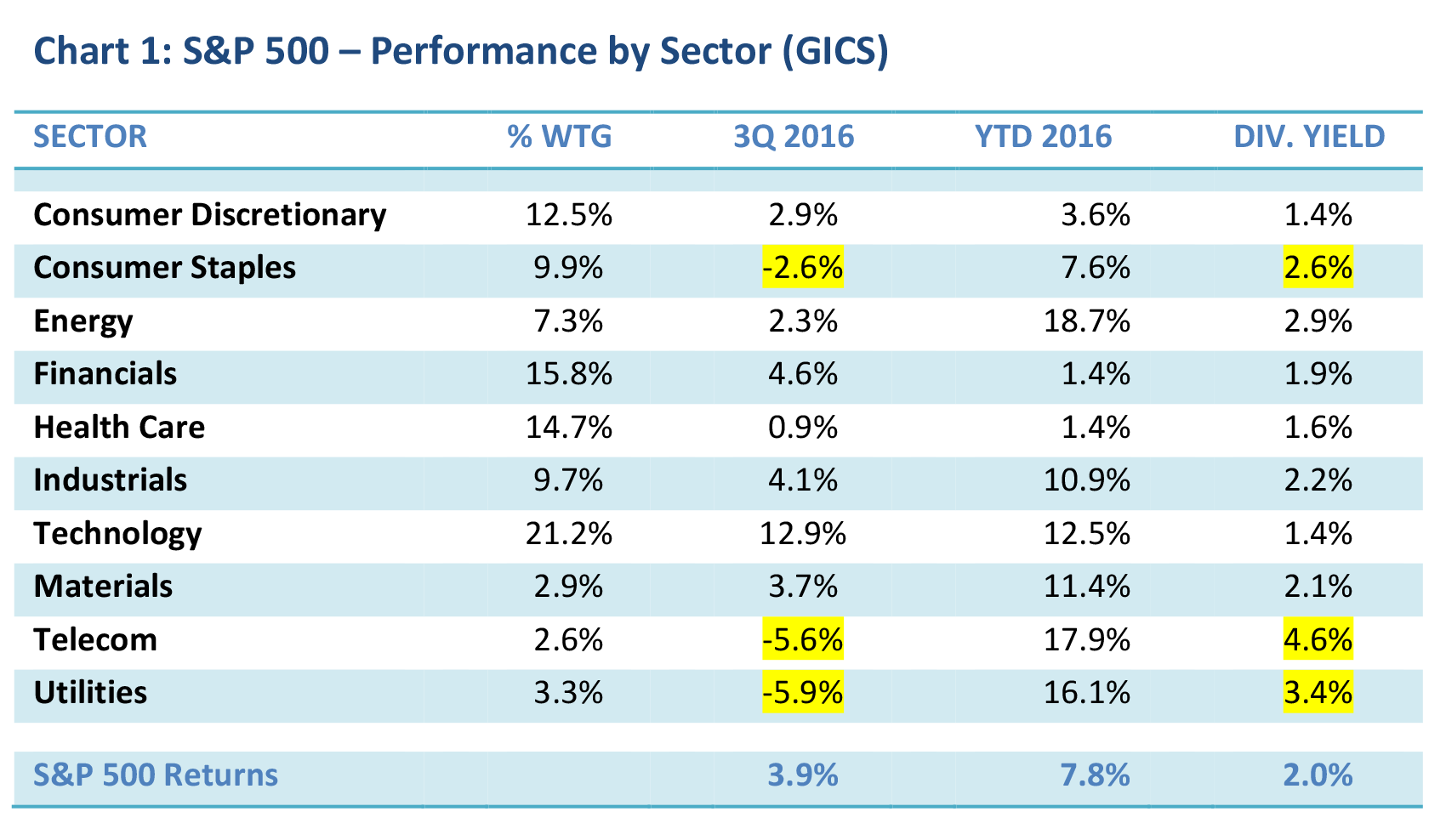 In fact, this trend has continued so far into the 4th quarter with defensive sectors leading the market lower, as opposed to providing investors a respite from the uncertainty leading up to the November 8th elections, and continuing to lag since Trump’s recent victory. High dividend and low volatility funds are stuffed with defensive shares, which provide high income, but very little subsequent growth. In many respects, low volatility stocks that look and act like bonds, have been the momentum stocks of the recovery, and outperformed in recent years. This outperformance has generated further interest and more capital, driving valuations higher. With a highly anticipated rate hike in December, and a perceived subtle reversal to the Fed’s unprecedented accommodative monetary policy, it is logical to conclude that high income and defensively exposed investors are reading the writing on the wall and starting to push the sell button. As active investors, Alamar would view a market that trades on fundamentals as opposed to Fed policy favorably. This shift may be an early signal that strides are being made in that direction. Given the tremendous flow of assets into passive investments, and other niche ETF funds, we have been wondering lately what the ramifications would be if we find ourselves in an environment where investors start pushing more sell buttons.

Passive, or index, investing is the construction of a portfolio with the intent to mirror the components of a market index. For example the well-known Vanguard 500 Index fund is invested in the 500 stocks of the Standard and Poor’s 500 Index on a market capitalization basis. This means that larger stocks by capitalization carry higher weightings in the index. Proponents of index investing eschew active investment management because they believe that it is impossible to “beat the market” once trading costs and taxes are taken into account. Additionally, index funds usually have lower management fees and expenses than actively managed funds. The concept has been around for many years, and with considerable success. 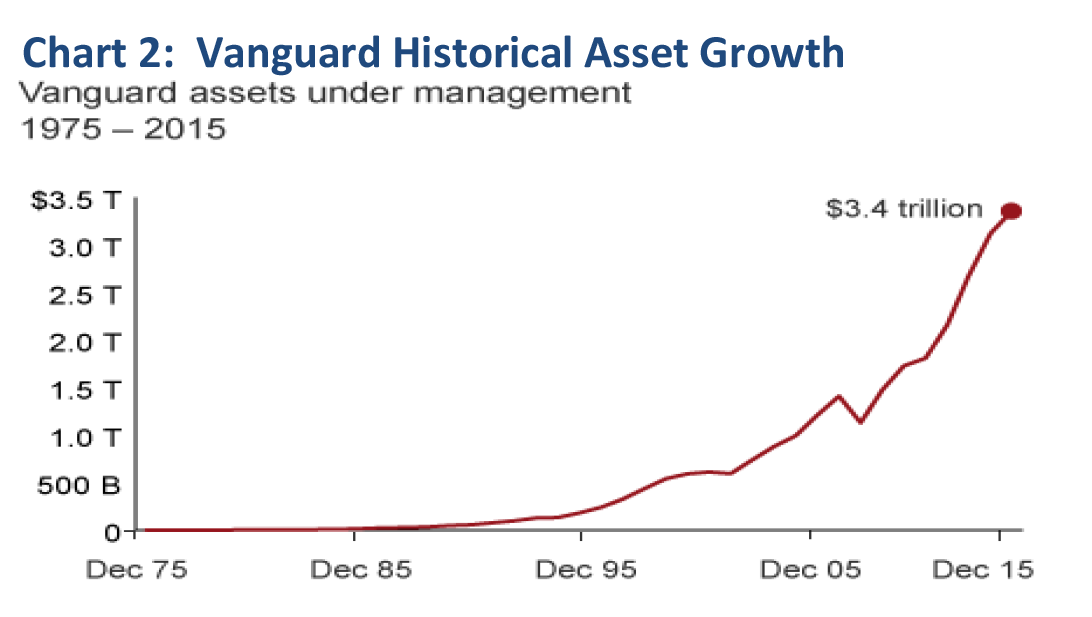 Vanguard has seen tremendous growth since its inception in 1975, as have many of its peers. Remarkably, however, much of this growth has occurred in the last decade, confirming an acceleration of the trend during a period when active management has particularly struggled. For instance, since the 2008 Financial Crisis, fund flows to active strategies have been flat to negative in every year, except one (Chart 3)! On the other hand, passive strategies have seen considerable in flows every year, and now represent over 34% of the overall funds market, up from less than 20% in 2009. 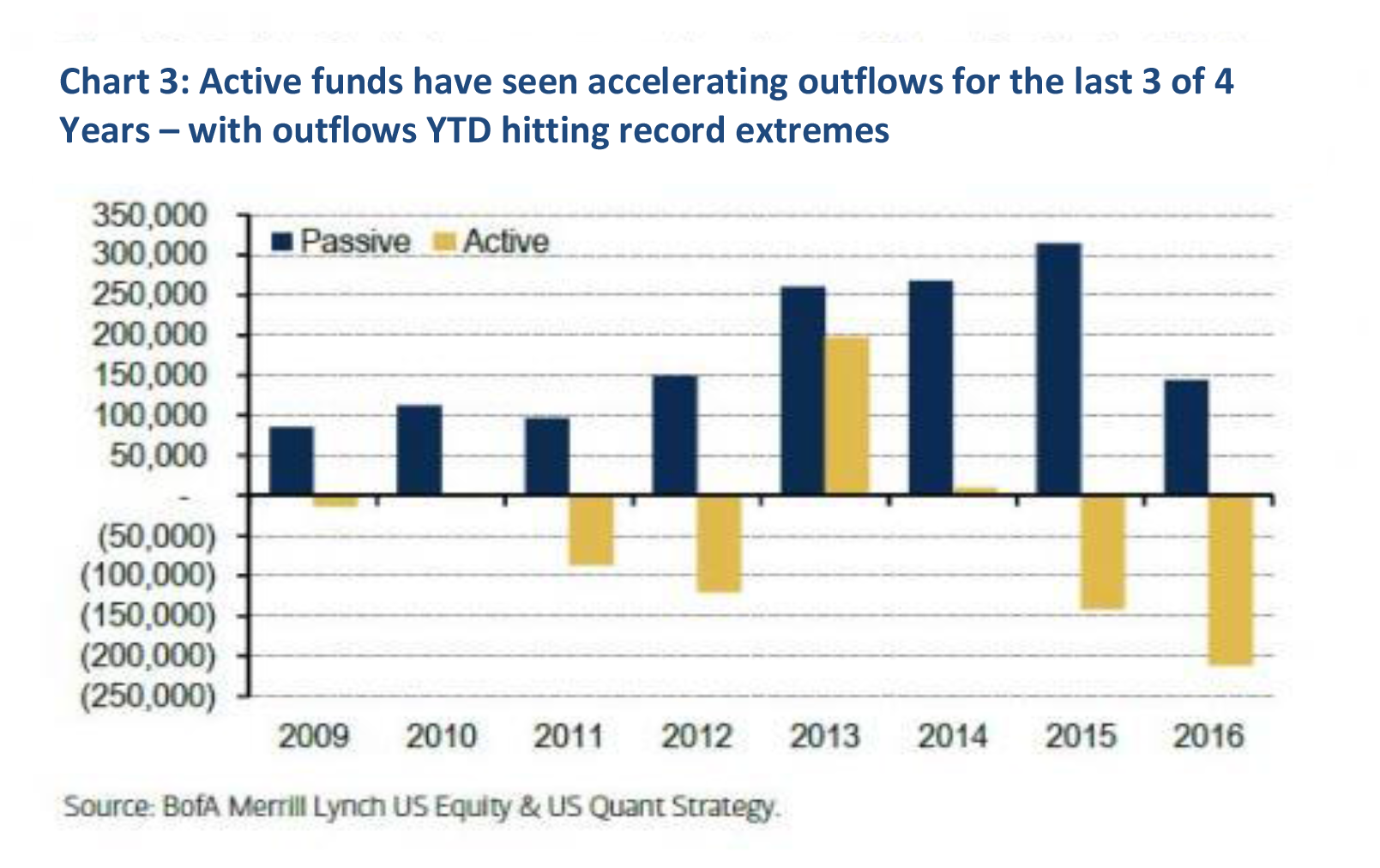 Of course, the decision by investors to index results in all participants in an owning the same stocks and at the same weightings. For instance, everyone that owns the S&P 500 index holds a 3% position in Apple (APPL). While investors who have purchased the NASDAQ index (QQQ) have taken an even bigger bite and hold a 10% position in the stock. We suspect that many index fund investors do not realize the concentrated bets that they may be making in just a few stocks. This concentration results in a lot of support for a stock like Apple when fund flows to these indexes are positive. However, as we have written about in the past, this over-crowding eventually leads to tears. Why? Because when everyone owns the same stock there is no one left to buy when the crowd starts to flee.

There has been much discussion in the media in recent months about passive investing and its incredible growth. Getting less attention, though, has been the response by many active managers to the challenge presented by index funds.

One would think that active managers would respond to their loss of market share by striving to differentiate themselves from the benchmarks, but this has not been the case. For many firms the temptation to own a stock like Apple in their funds often overcomes them. This is because of its large representative weighting in the index, and due to the fear that holding names outside their index might lead to considerable short term underperformance and a loss of assets. As a result, these funds elect to mimic, or closet index, by owning many of the same positions as their benchmark.

Ironically, by choosing to closet index these funds, and the firms who run them, are essentially insuring their own demise over time. This is because they are virtually guaranteed to lag their respective benchmark when including transaction costs and fees. To us this is foolish really. In essence it is the same thing as an investor paying a wealth advisor a 1% over sight fee to purchase the S&P 500 index on their behalf. It also works to increase the overcrowding, or concentration risk discussed above. Professors Martijn Cremers of the University of Notre Dame and Antti Petajisto, formerly of New York and Yale Universities have written extensively on this subject. Chart 4 provided from one of their recent papers, displays the percentage of active managers who have managed at least 80% of their assets in an active manner since 1980. Active management, or active share, can be defined as the fraction of the portfolio that is different from the benchmark index. The 80% threshold is viewed as the litmus test for true active management, while levels below 60% reflect the cut off as a closet indexer. 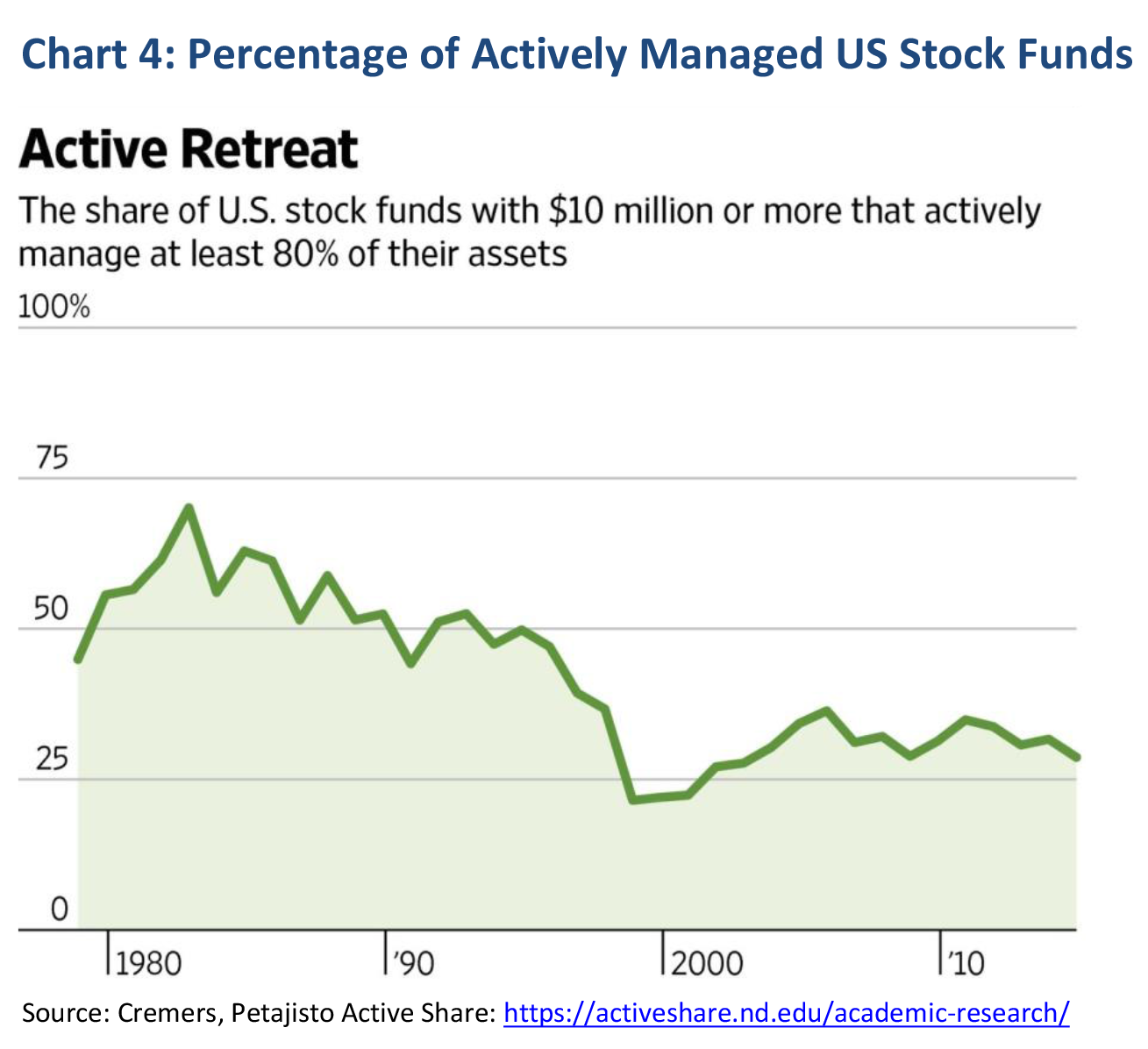 As you can see, the chart shows a fairly consistent and stable retreat from active management starting in the early 80’s, and increasing in the later part of the 90’s. Similar to the environment today, the late 90’s was a period of time in which the market was being driven by just a few stocks, admittedly at much higher valuations. Though the trend is consistent, the graph does show an uptick towards active management coming out of the dotcom crisis, a period of time that favored the active approach.

In our experience, many investment management firms start with high active share and then tend to drift towards the index slowly over time. Take the case of the of the Fidelity Magellan fund (FMAGX), an active strategy run by famed investor Peter Lynch throughout the 80’s. Under Mr. Lynch’s leadership the Magellan fund posted a 29% annual return from 1977 to 1990. Chart 5 measures the strategy’s historical year end active share. Considerable research has been done to indicate that high active share managers, by virtue of their willingness to swim against the tide, have the highest likelihood of out-performing. Therefore, the statistic is viewed as a good predictor, but not guarantee, of future fund performance over time. 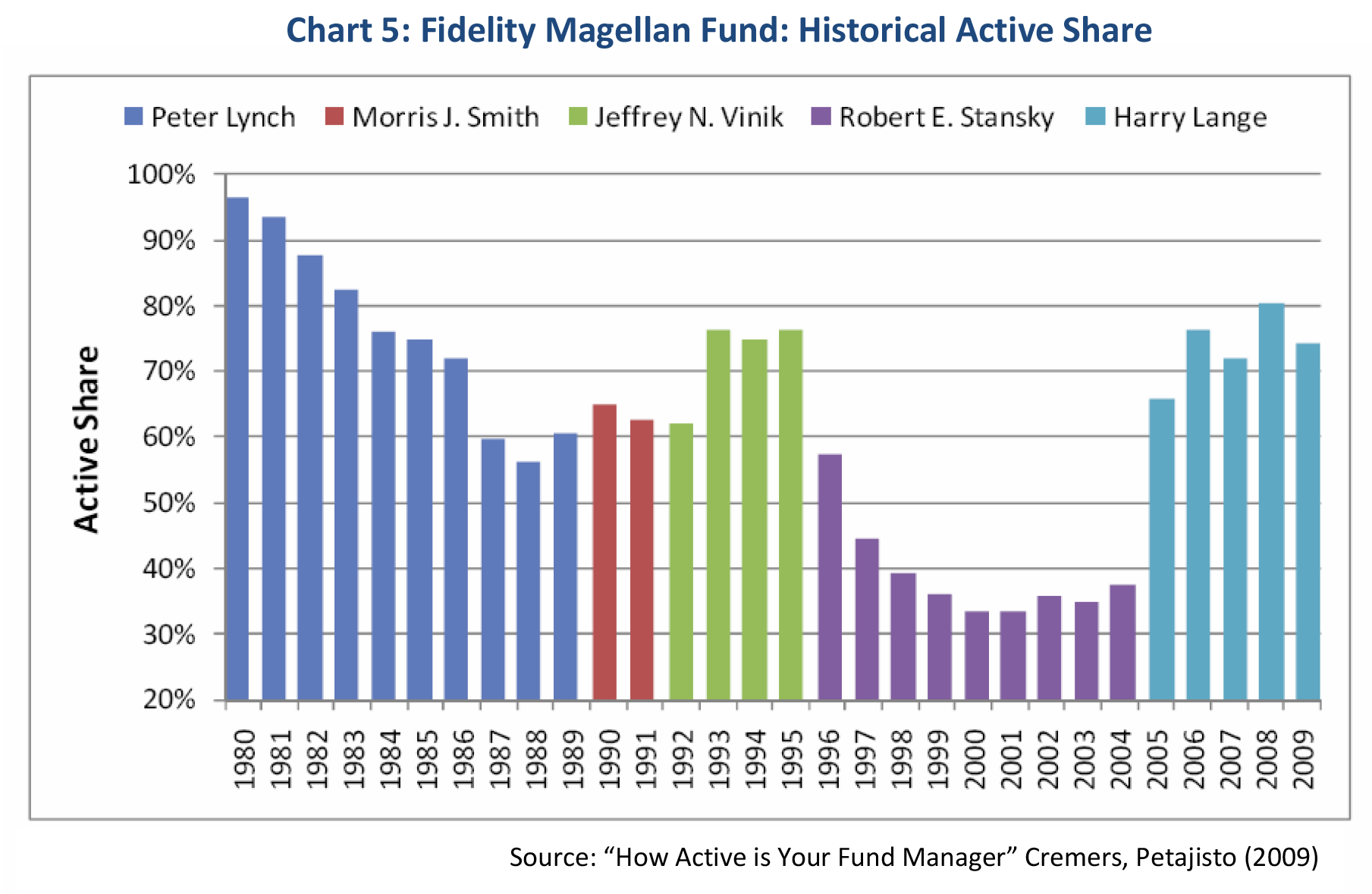 For many years Fidelity Magellan was known as an aggressive and highly successful fund. However, its active management approach witnessed a steady decline, and then a significant change under the management of Robert Stanksy (’96-’04), when it became a closet indexer. The performance of the fund over his tenure is shown below, and tells an all too familiar story of performance chasing:

Stansky was given a fund with $50.0 billion in assets in 1996 and, as you can see, under performed significantly in his first two years at the helm. Then, under pressure to keep up with the market from fund investors and likely to retain assets from Fidelity management, he effectively became the market. In total, Stansky lagged his benchmark by 2% per year over the 9 year period (7.5% vs 9.4%). He retired in 2004, handing Magellan to a replacement who pledged to return the fund to its more active “go anywhere” roots.

Compare the chart above with Chart 6 below, which depicts the historical active share of Alamar’s Equity strategy. The chart shows that we are firmly entrenched in the active camp. We remain committed to staying there, despite short term performance swings. In fact, active share is often most frequently conducted by smaller niche money managers like Alamar, who have not yet attracted considerable assets and the associated overhead costs. Again, high active share is no guarantee that a fund will outperform, but it is likely a necessary condition. 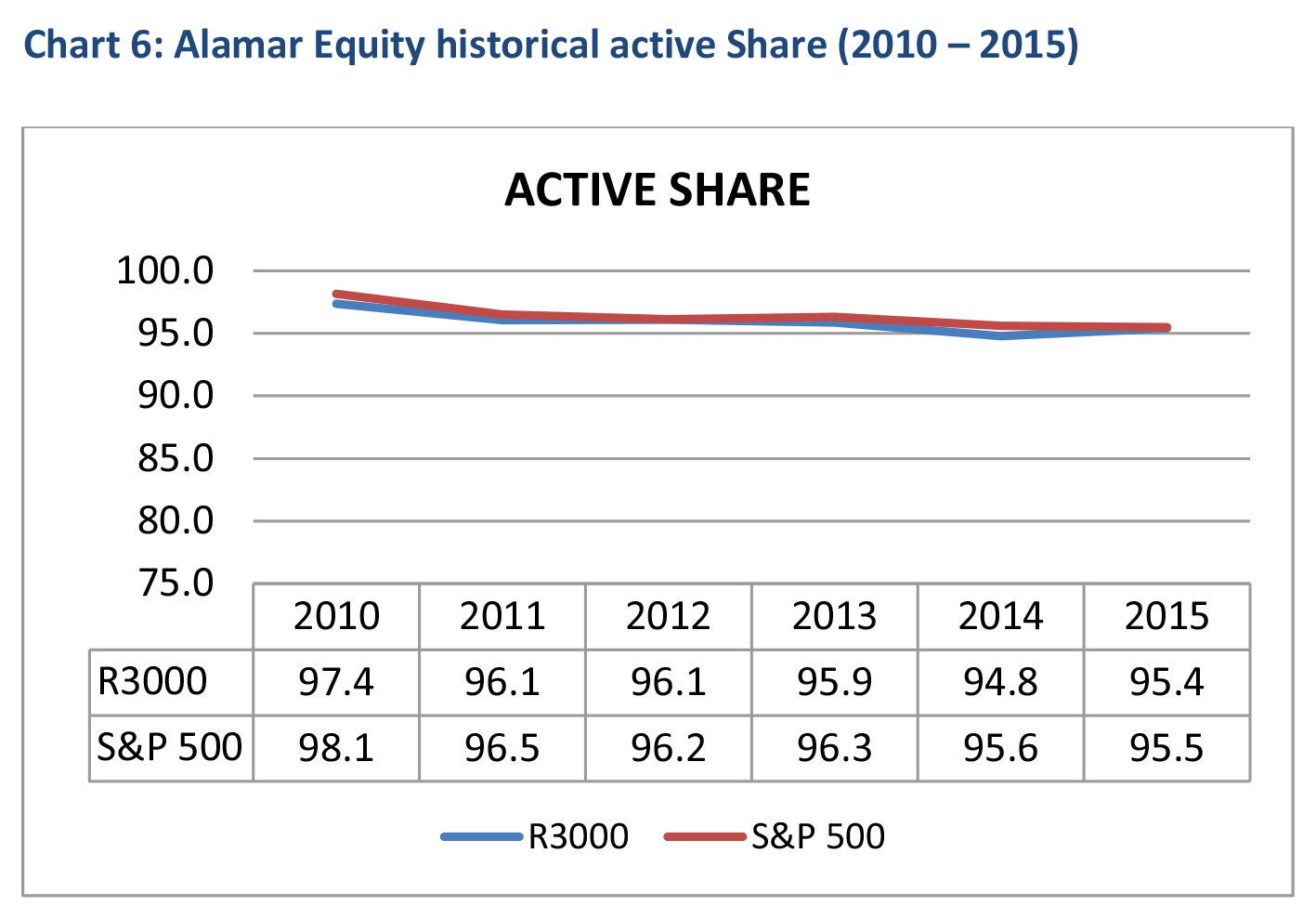 It is clear that passive investing is not going anywhere anytime soon, and it is difficult to determine how much market share it will continue to take from the active camp. In large part this will be determined by active management’s ability to justify its higher fees and transaction cost through relative outperformance. At Alamar we have been able to outperform the market since inception by engaging in a high active share approach.

Index investors may experience difficulty in a market correction due to heavy selling pressure. These challenges could be exacerbated due to the unprecedented flow of assets into passive strategies and the increasing temptation for many to closet index. As a result, we believe that a highly active component might be a nice complement to an existing index strategy. In fact, we currently offer this approach to several of our wealth management clients, where we are playing a larger role in the management of their finances.

Investors buying active management need to make sure that they are securing the benefits that they are paying for, and not simply doubling down on existing passive bets. There are many funds, and wealth advisors for that matter, still charging high fees for very little active management, and giving investors the market in return.

Thank you for your continued interest and consideration of Alamar –