As we have discussed over the past couple of quarters, overall frothiness in the markets continued to reveal itself in the 3rd quarter, with the S&P 500 pulling back -6.4%. The combination of slowing domestic and global growth, a strong US currency, weak energy sector, and continued anticipation of a Fed Rate hike proved too much for the market to overcome, forcing it into negative territory. It is now down -5.3% on the year.

FEAR BACK IN THE MARKET

Of notable interest to us in the quarter, was a significant jump in the CBOE Volatility Index (VIX). The VIX, often referred to as the fear gauge, had been quiet for some time leading many market pundits, Alamar included, to worry that investors, now 6 years into a bull market, had been lulled into a false sense of security. The chart below (Figure 1) plots the VIX index dating back to 2004. VIX values greater than 30 are generally associated with a large amount of volatility as a result of investor fear or uncertainty, while values below 20 generally correspond to less stressful, even complacent times in the market. 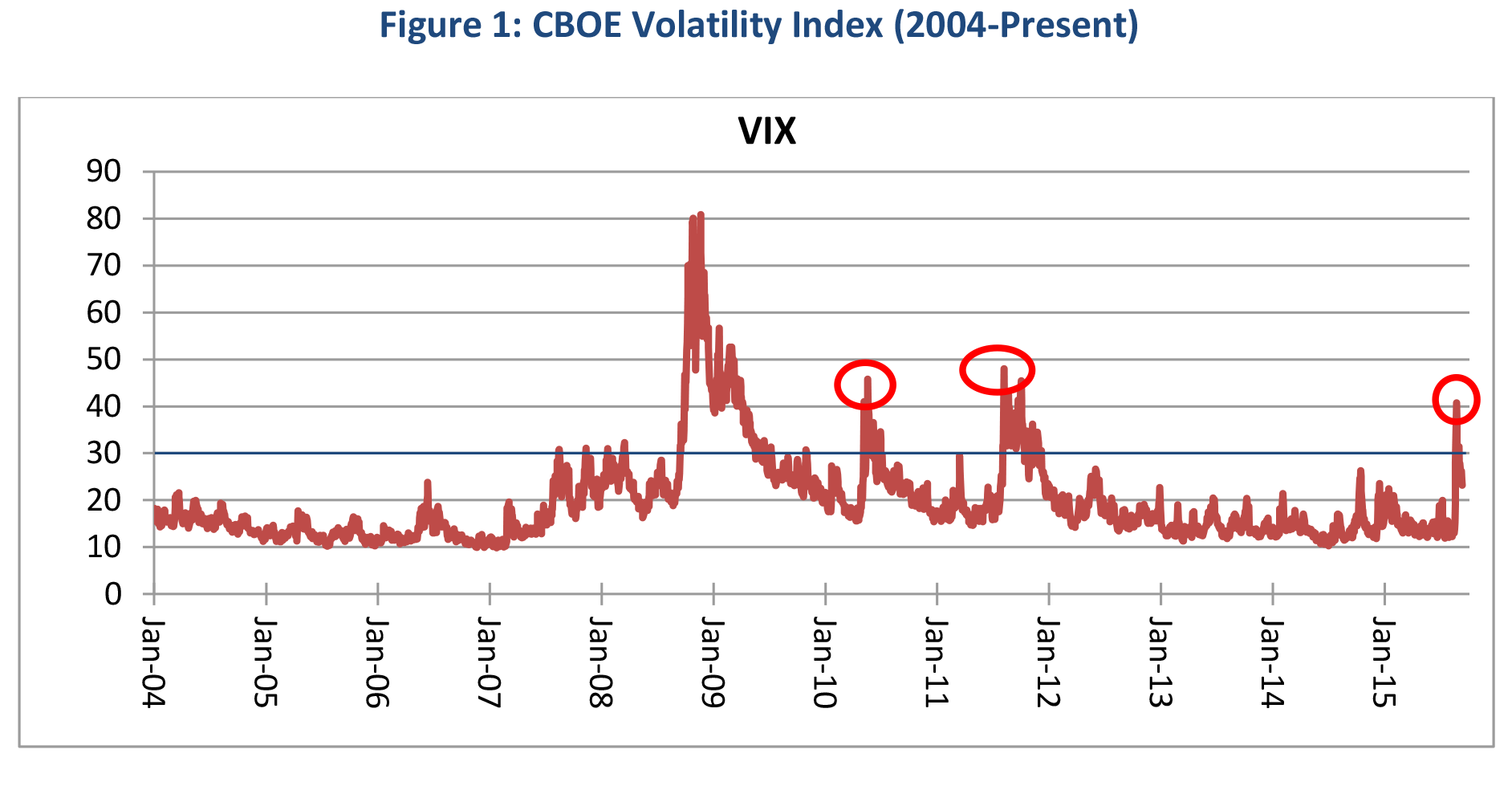 As the chart suggests, there have been 3 meaningful spikes in the VIX over Alamar’s history as a firm. The market’s subsequent reaction to these spikes over the same time period can be seen in Figure 2. 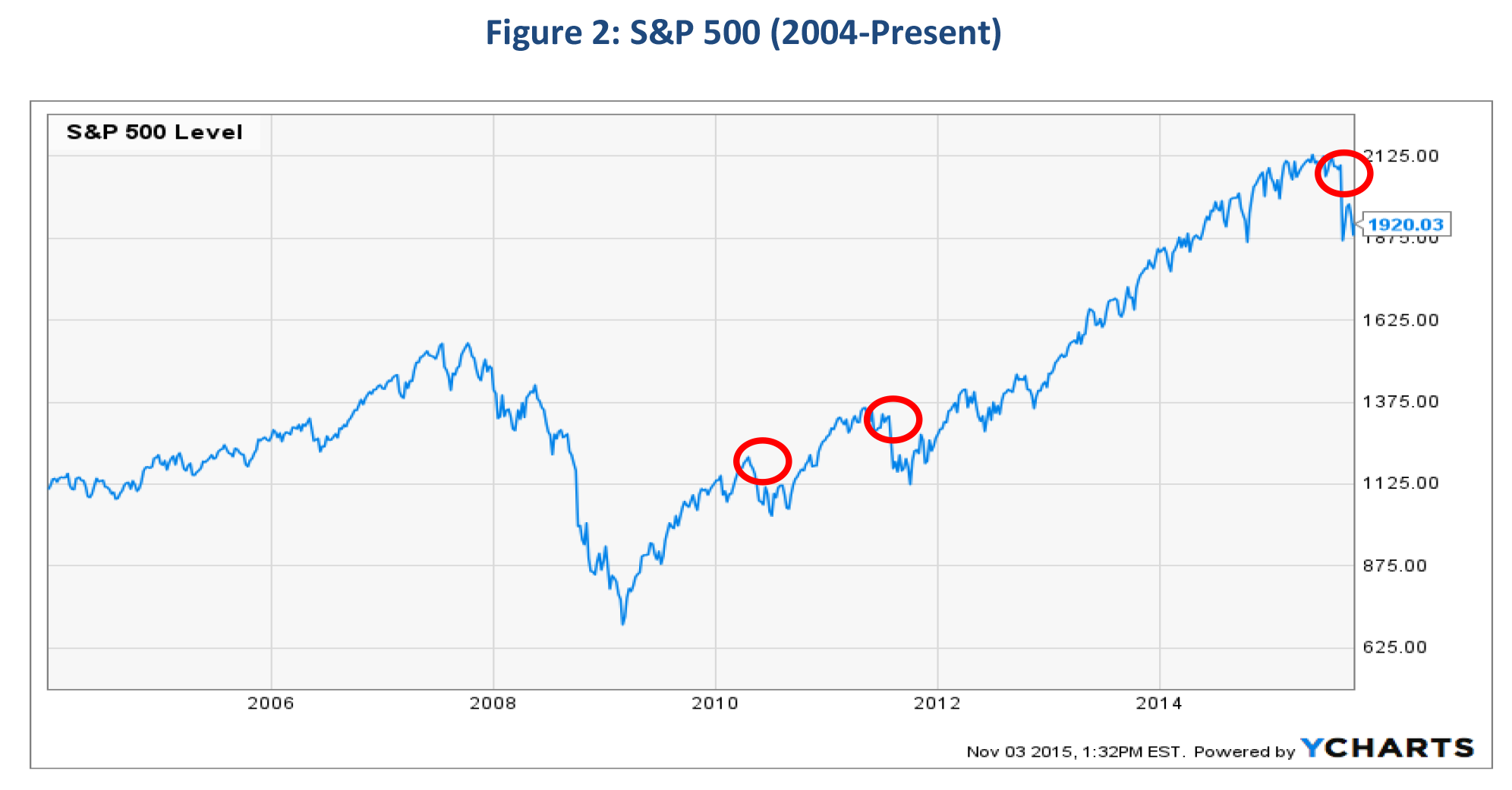 Looking back, it is almost easy to forget these bouts of volatility, given the markets steady move higher in the years since the Great Recession. However, there has been plenty to worry about, starting first with fears of a double-dip recession and the emergence of the Greek crisis, which saw the S&P pull back -11.4% in 2Q 2010. Next, a problematic Europe, US budget stalemate, and the Standard and Poor’s downgrade of US debt resulted in a -13.9% correction in the 3rd quarter of 2011. Following this, the S&P was able to achieve a positive return in 13 of the next 15 quarters, with just minor pull backs in the 2nd and 4th quarter of 2012, before finally hitting some turbulence this fall. We thought we would discuss one of the key culprits in this most recent VIX spike and correction with this commentary, the role of the Chinese economy.

We recently had the opportunity to do a presentation for several of our clients and friends here in our hometown of Santa Barbara. During the presentation, we shared the historically incredible performance of the Chinese economy in recent decades, and also some of the near term challenges. For instance, Figure 3 below compares how the Chinese Economy in the 2000s has dwarfed that of Japan’s economic miracle in the late 80’s and early 90’s.

As a result of this considerable growth, China now commands the 2nd largest economy in the world and a population of 1.4 billion rapidly industrializing citizens hungry for the world’s products and services. As the largest of the emerging markets, the lift off of the Chinese economy has put wind into the sails of other developing economies such as Brazil, Russia, India, and South Korea to name a few. As a result, capital has drifted from the developed world, toward these higher growth economies, in search of greater returns.

For comparison sake, the chart below (Figure 4) shows the historical and forecasted growth rate of China vs. a developed economy the US, from 1980 through 2020. China’s conversion to a market based economy has seen it experience hyper growth for many years, but the very large Chinese ship is beginning to slow down and it remains debatable just how quickly. This factor along with a stronger US currency and a weak energy sector has acted as a triple whammy for other emerging economies as their economies cool and capital exits.

Fortunately, as the chart shows, the US economy has not historically been overly dependent on China to achieve growth, and the correlation between their growth rates appears quite low. If this trend continues it could prove to be quite helpful to investors and businesses with considerable US domestic exposure.

The impact of China’s slowing growth has been most readily visible in their and other emerging stock markets and also in the commodity markets, where China has had an almost insatiable appetite in recent years (Figure 5). 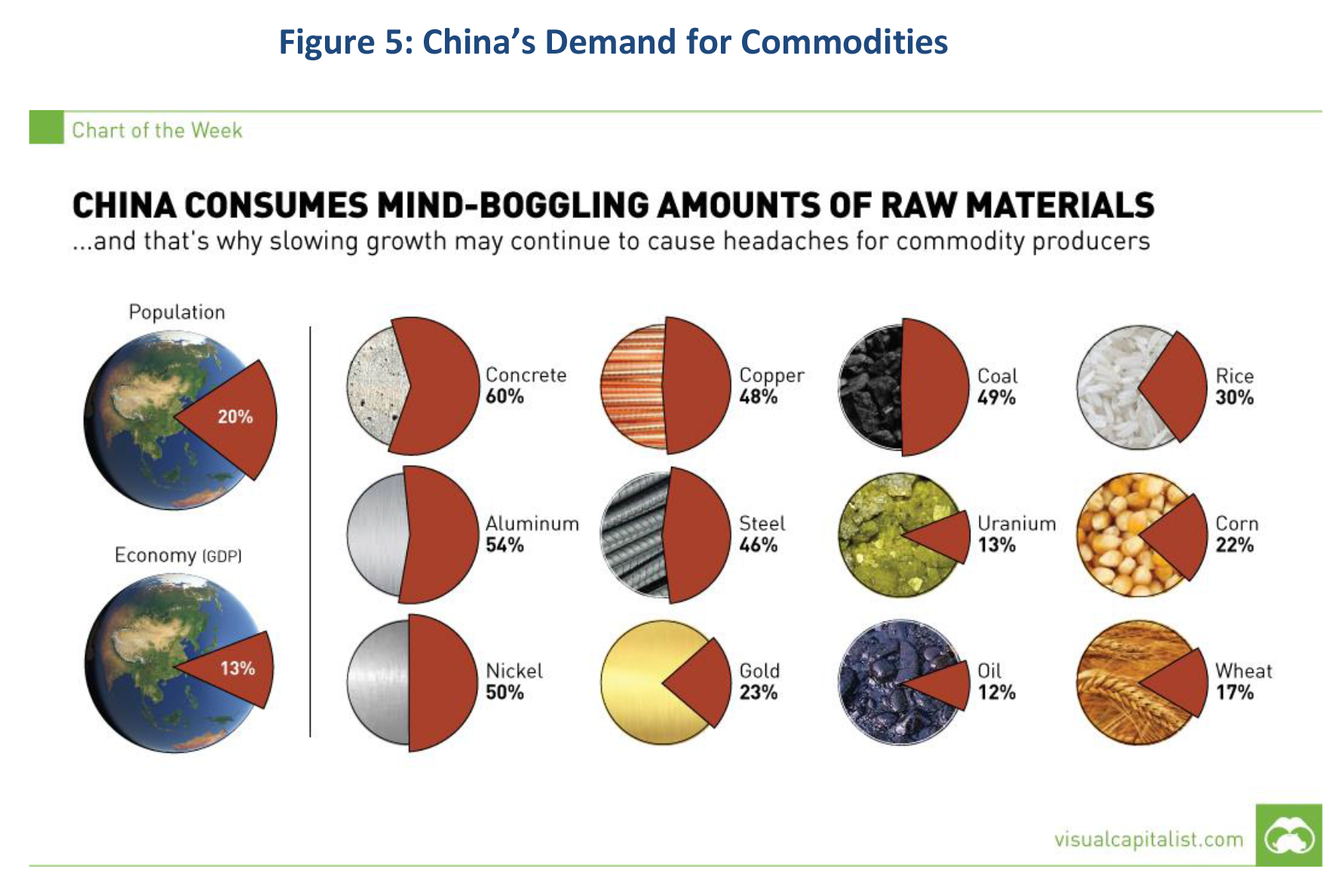 For example, remarkably with just 20% of the global population and representing 13% of global GDP, China demands 60% of the world’s concrete and 48% of its copper! A slowing Chinese economy has seen commodity prices decrease by almost 43% in the past year.

Of further concern to us, given China’s history and lack of transparency, is the possibility their economy is performing even worse than the projections being provided to us by their government. It is this realization and debate that has resulted in much consternation for investors in recent months.

Despite not having any investments in China, we keep track of many Chinese statistics in order to get an independent read on the performance of the Chinese economy; Figure 6 depicts two of them. 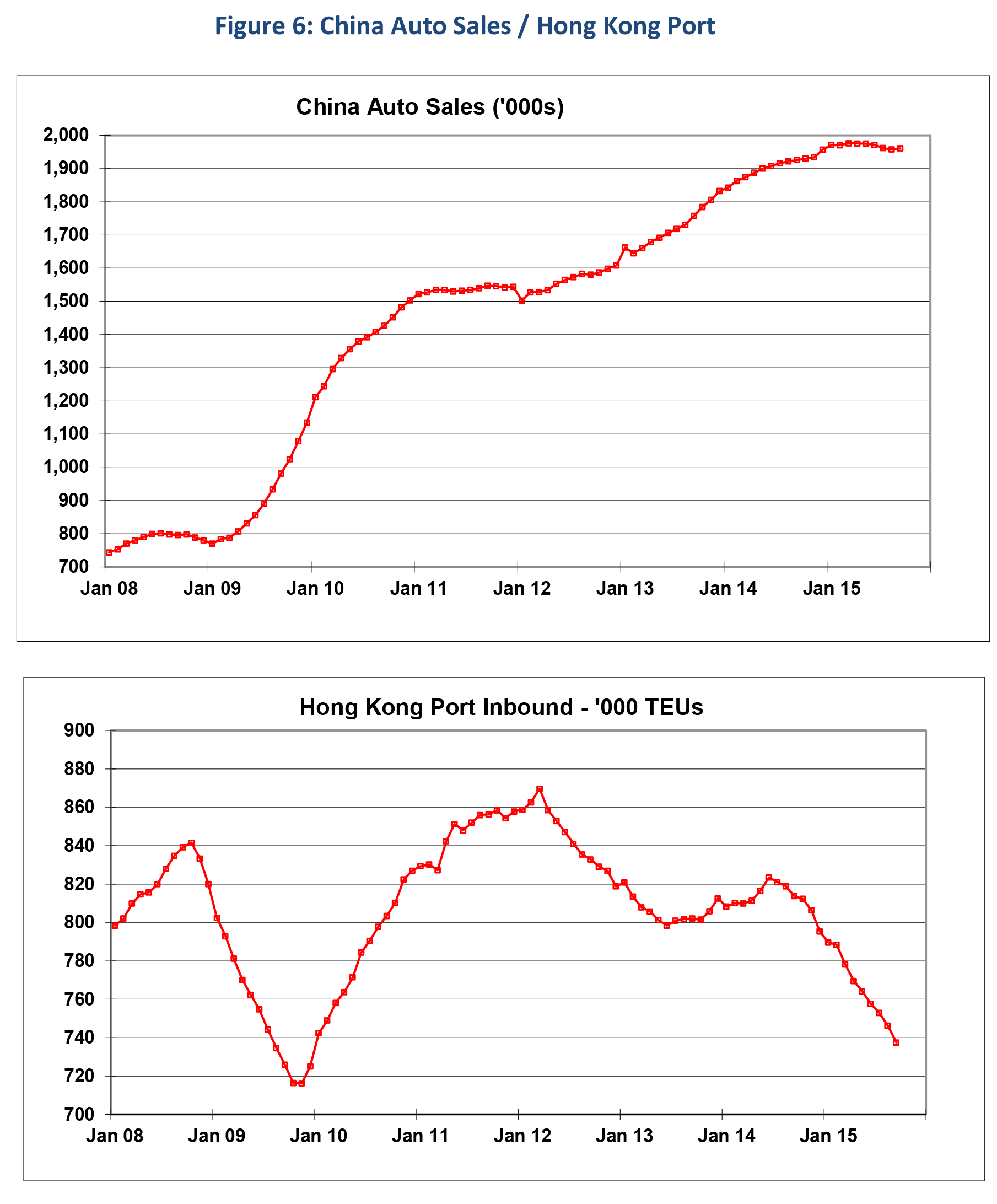 The first measures the number of autos sold in China going back to the crisis of 2008. The second measures the number of containers in twenty-foot equivalent units (TEUs) coming into Hong Kong on ships over the same time period. These statistics, we believe, are not subject to manipulation by the Chinese government. Both show an economy that is not just slowing, but rather in contraction.

Though we have not experienced a meaningful sustained correction since our inception in January 2010, the market has provided plenty of fireworks. We are happy to report that our equity strategy has held up well during these turbulent times, most notably this year, achieving a slightly positive return YTD when many are in the red.

We speculate the situation in China is probably worse than advertised, but it need not necessarily result in a derailing of the US economy which continues to stumble along. We have tilted the portfolio away from the energy sector, and other commodities, and continue to focus on companies with considerable US domestic exposure and runways for future growth.
Thank you for your continued consideration of Alamar.