As with last quarter, we have underperformed the S&P 500 this year primarily because of continued short term disappointing performance from 2 securities that have historically done well for us, and our underweight position to the health care sector. Further, our lack of exposure to large bell weather technology companies such as Apple (AAPL) & Microsoft (MSFT) and their high flying younger siblings like Facebook (FB) have hampered our short term performance, as they continue to contribute meaningfully to the overall market’s return. In fact, the performance of just 6 technology names account for nearly 2% of the markets return on the year. In other words, through 3Q ’14, this short list contributed roughly 25% of the markets return! While at the same time, many stocks in the NASDAQ have already entered bear market territory seeing 10+% declines.

In our last Market Summary we discussed the apparent disconnect between the performance of the stock market (all-time highs) and the bond market (10 year Treasuries near all–time highs). We did not believe that a 2.5% treasury yield was consistent with future economic growth and it seemed to us that bond investors and stock investors were in the midst of a disagreement on the state of the economy. Due to the heightened volatility in the market thus far in the 4th quarter (Chart 1), we thought we would update our current perspective on this with the remainder of this writing.

As we have mentioned in the past, oftentimes, we try to identify individual companies that we can monitor due to their propensity to give us insights into the performance of various sectors and segments within the overall market. In many cases we do not own these companies in our portfolio, but they prove useful barometers, which we can compare and contrast against aggregate data being provided by the government, or other entities. For example, the weakness in Ann Taylor’s key performance metrics might tell us that the economic prospects for working women are beginning to deteriorate.

In that regard, we have grown increasingly interested in the behavior of the Consumer and the net impact fed policy and the economy is having on their spending. Consumer spending represents 67% of the overall US Economy and much of the stated intent of the Fed’s recent policy has been to improve the plight of the US Consumer. Their policy has been to provide stimulus in an effort to generate job growth and wage gains, which will assist to increase household formation and stimulate the housing market, another key component to the overall economy. Of course, many have argued that, in practice, the net result has simply been inflated asset prices. Given this scenario, one might assume that the spending of the affluent, the undeniable beneficiaries of fed largess, would be different than the lower end struggling consumer. The chart below takes a look at this scenario by comparing the same store sales growth of Whole Foods Market (WFM) and Dollar General (DG) over the course of the recovery. 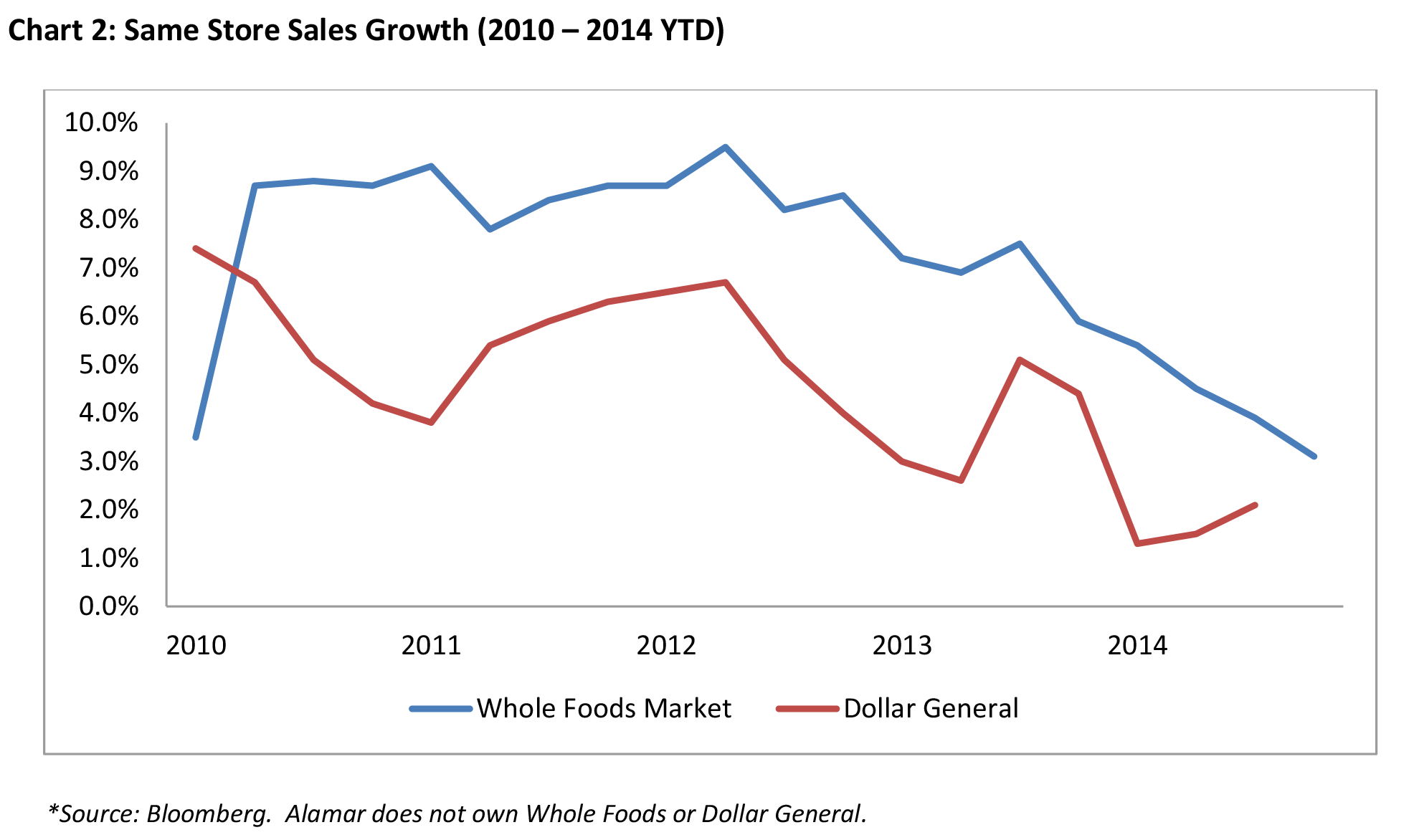 In this example, the more affluent amongst us appear to have increased, or returned to prior spending patterns earlier than the lower end of the market. However, both groups have seen this growth peak somewhere in the middle of 2012 and pull back fairly significantly since.

Though we show just two companies in the above example, we’ve found this same phenomenon consistently playing out across the economic spectrum. Companies seem to be able to achieve meaningful earnings growth, but without much of an increase in their revenue. Further, in many cases companies have been adjusting their expectations for the remainder of 2015 downwards. We do not believe this is a good sign. For our part, those of you who invested in our All Cap Strategy may have noticed our cash levels have increased in recent weeks, as we have struggled a bit to find attractive investments.

Though we are receiving many macro reports indicating an improving economy, we are not necessarily seeing this in the performance of various individual companies. As we mentioned in our last quarterly writing, it is important that we remain vigilant, given these apparently contradictory data points.