This quarter we will depart from our normal practice and discuss our thinking on a popular stock, albeit one we have not invested in. We will also explain our views on the economy and the Federal Reserve’s latest round of quantitative easing. To preview, from our vantage point, the economy is showing signs of weakening and we are somewhat cautious in our outlook.

It is said that humankind’s original sin was taking a bite of the apple. The question at hand is why haven’t we succumbed to the temptation? After all, isn’t everybody enjoying the tasty gains provided by the most valuable company on the planet? We are referring of course to Apple Inc., the iPhone maker, not the fruit. Apple now represents the largest weighting in most broad market indices, exchange traded funds (ETFs), many hedge funds and large mutual funds. The stock is now up over 60% for the year and the company is valued at roughly $620 Billion. Approximately 15% of the S&P500’s return this year has come from this single stock! We are not aware of any stock that has had such a disproportionate impact on the broad market in the last 20 years. Clearly, not owning AAPL has had an impact on our performance versus market benchmarks this year. The obvious question that comes to mind is why don’t we like what everyone loves? Why do we, as Steve Jobs would say, “Think Different”?

When we purchase a stock we assume we are given the opportunity to buy the entire company. To purchase a share of Apple therefore implies we are willing to pay $620 Billion (or $500 Billion net of cash on the balance sheet to be more precise) for the entire company. Since we expect at least a 10% return on this investment, the company would have to generate 10% of $500 Billion or $50 Billion annually in profits in perpetuity. We attempted to estimate the odds of a company achieving this happy outcome. For our analysis, we looked at the historical reported profits of all 500 companies in the S&P 500 going back to 1980. In order to make it a relevant comparison to the present circumstance, we adjusted all the profits for inflation so that all the numbers can be compared to current dollar values.

Remarkably, over the last 30 years, not a single company has ever reported profits close to $50 Billion, adjusted for inflation. The only company that came close to the mark was ExxonMobil which reported $47 Billion in 2008. Citigroup follows ExxonMobil at $28 Billion in 2005, at the peak of the housing bubble. Citigroup is closely followed by another Oil & Gas major, Chevron, at $27 Billion in 2011. Table 1 depicts the frequency of large-profit years for all 500 companies over the last 30 years. For ease of illustration we have only shown occurrences of profits above $5 Billion in any single year. The probability of reporting profits greater than $25 Billion in any single year is roughly 1 in 1,000.

Another interesting discovery is that few companies have been able to sustain their profits at these lofty heights. As is typified by Citigroup, the big profits are maintained only for a year or two before falling off dramatically. Only ExxonMobil has put together a string of profits above $20 Billion for more than 3 years, no one else comes close! The other large companies have difficulty sustaining their profits for long periods of time and inevitably succumb to competitive shifts in the marketplace.

The inevitable conclusion we reach after studying historical data is the odds of a company generating $50 Billion in profits in any single year is extremely remote and the probability of maintaining such profits is non-existent. We have therefore passed on the opportunity to jump on the Apple bandwagon despite the temptations and the painful experiences of watching it from the sidelines.

On September 13, Ben Bernanke, the Chairman of the Federal Reserve, announced the onset of yet another round of quantitative easing (QE) or, to put it bluntly, money printing. This will be the 3rd round of printing and this one has no time limit. The Fed will print $40 Billion every month and buy mortgage backed securities (MBS) until unemployment comes down to a currently undefined satisfactory level. The Bank of Japan (BOJ) soon followed suit and announced another round of QE. Japan has been engaged in money printing since their housing bubble burst in 1991, to no avail. Figure 1 depicts Japan’s monetary base as a % of GDP with a comparison to the US. All this money printing has done little to lift Japan from its economic doldrums. Similarly, the Fed’s QE 1 (September 2008) and QE 2 (November 2010) has done little to lift our economy. After a pickup last year, we saw a noticeable slowdown starting near the end of the second quarter, which has continued. 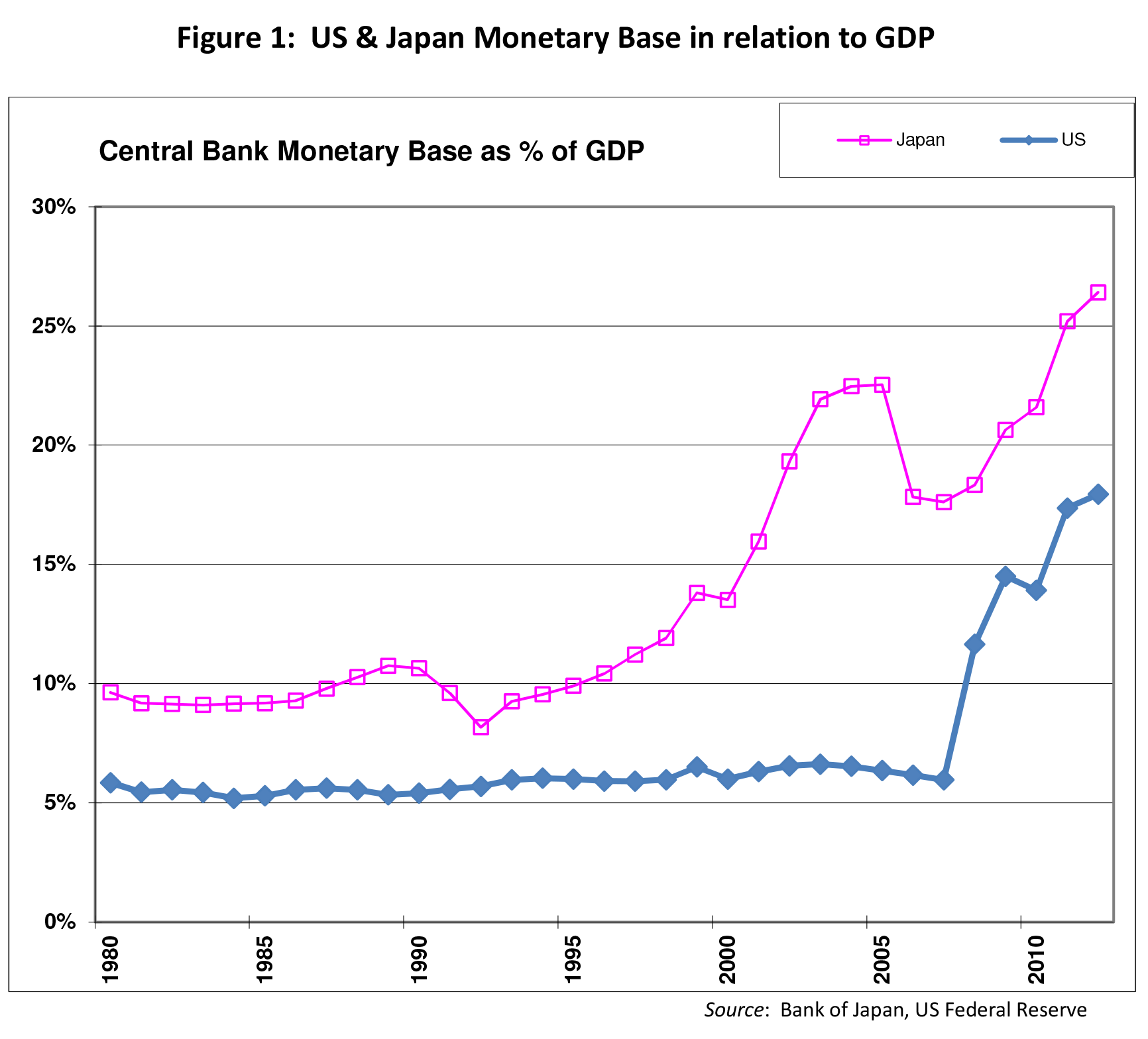 One of many metrics we track at Alamar is the total electricity generation in the US. Electricity usage is highly correlated with economic growth. A growing economy uses more electric power for industrial and household usage while a slowing economy uses less. Figure 2 exhibits electricity usage in the US since the beginning of the recession in late 2007. The graph clearly shows the decline in usage during the recession in 2008 and the pickup starting in late 2009. However, after a brief upturn, usage has begun to decline once again. Even though the government reports that GDP is growing once again and has exceeded the 2007 peak, the electricity usage statistics do not confirm this trend. 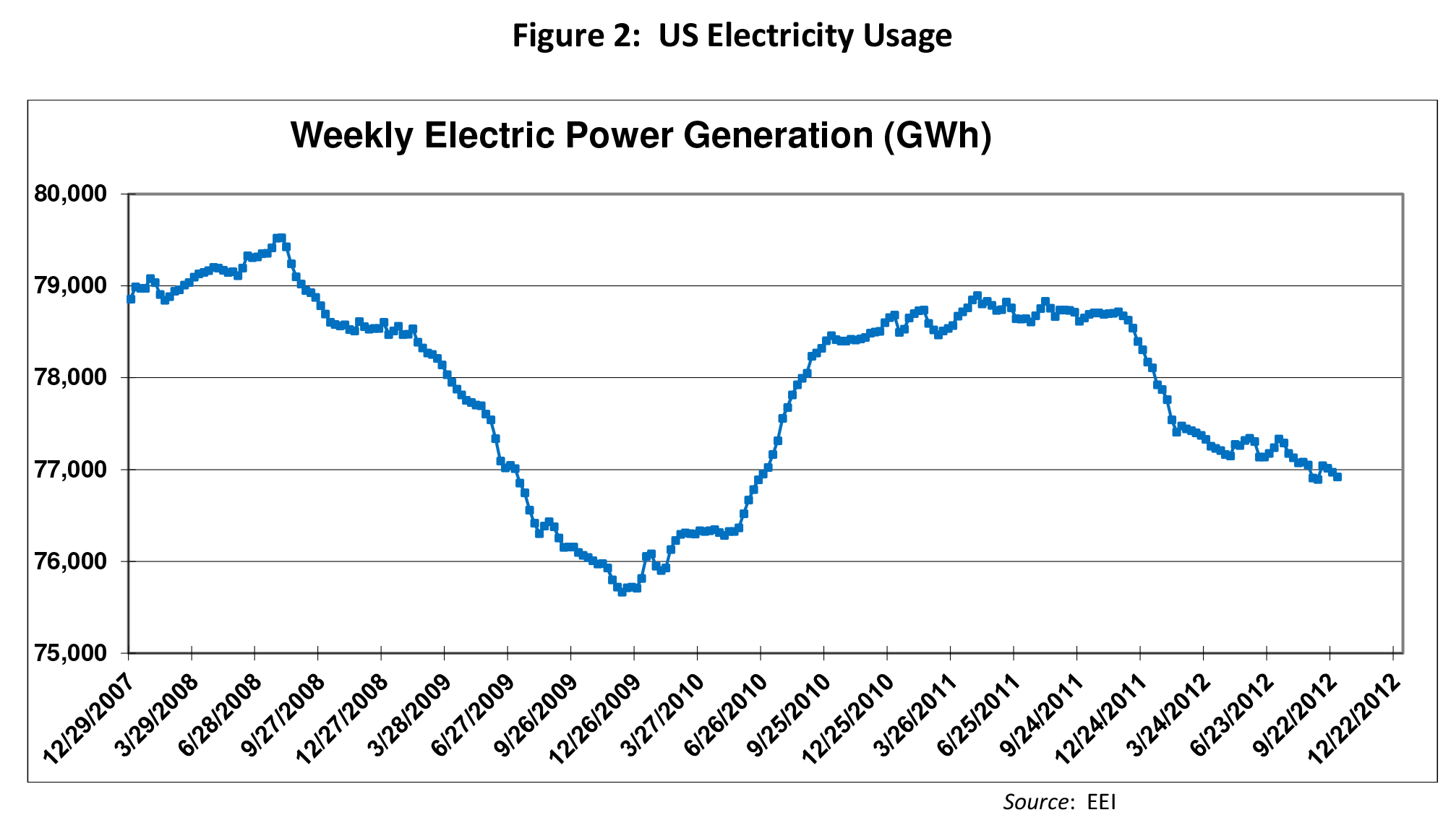 Despite this and other signs pointing to a weakening economy the stock market continues to march higher. This is quite possibly in response to Federal Reserve actions since Chairman Bernanke has been very explicit about his aims to lift the stock market through monetary policies. In the Q&A after the latest QE announcement, Bernanke, in response to a question about the motivations for the latest round of money printing, had this to say:

“Stock prices — many people own stocks directly or indirectly. The issue here is whether or not improving asset prices generally will make people more willing to spend. One of the main concerns that firms have is there’s not enough demand. There are not enough people coming and demanding their products. And if people feel that their financial situation is better because their 401(k) looks better or for whatever reason — their house is worth more — they’re more willing to go out and spend, and that’s going to provide the demand that firms need in order to be willing to hire and to invest.”

Nowhere in the Federal Reserve Act is there a mandate for the Federal Reserve to manipulate stock prices. We have already seen the aftermath of stock market and housing bubbles enabled by Fed policies in the last decade. To deliberately go about inflating yet another bubble after the dismal failures of the previous two is tantamount to gross ineptitude. The fact that only one individual objected and voted against this continuing madness is tragic.

We live in interesting times. Despite clear signs of economic weakness the market continues to march higher. Professional and individual investors have crowded into some well-known stocks that are contributing a disproportionate share of total market returns. These stocks happen to have very large weightings in market indices and benefit from inflows into ETFs that track market benchmarks. The odds of these companies continuing to generate very large profits are exceedingly low; nevertheless the momentum propels these stocks forward.

The Federal Reserve, despite all evidence to the contrary, continues to believe in the magic of money printing. They are now engaged in a third round of quantitative easing with the explicit purpose of generating employment by manipulating stock and home prices. We have been down this road before, to no avail. Japan has been doing this for over two decades, to no avail. Indeed, if this policy actually did work then Zimbabwe would be the richest country in the world! Einstein once observed: “Insanity is doing the same thing over and over again expecting different results”. Perhaps this Federal Reserve will prove Einstein wrong.

We continue to be cautious investing in this environment. Accordingly, we have high levels of cash, precious metals and options for downside protection.

Thank you for your continued consideration of our firm.