The equity markets had the most difficult time in the third quarter since the crisis of 2008. The economic and financial crises in Europe flared anew with resurgent force and the US lost its cherished, long-term AAA rating. The good news, if you can call it that, is we once again outperformed the markets this quarter. However, we ended up losing money for our clients. While we anticipated a rocky investing environment, and came into the quarter with a large dose of cash, we could not avoid the global contagion emanating from Europe, and gave up the gains we had accumulated in the first half of the year. We are now down approximately 1% for the year, while the S&P500 is down 8.7%. Since inception we have outperformed the S&P500 by roughly 10%, on an annualized basis.

Where art thou John Maynard Keynes and Milton Friedman? Since the Great Recession began in 2008 we estimate the Federal government has spent over $3 Trillion in fiscal stimulus (roughly 20% of GDP) following Keynesian philosophy to generate economic growth. Such unprecedented spending has not been attempted in any previous recession post WW II. Even during the Great Depression the federal government did not spend anywhere close to these levels of GDP to lift the economy out of depression. Concurrent with this fiscal expansion the Federal Reserve has been rapidly expanding its balance sheet following Milton Friedman’s dictum. As discussed in previous writings, with two “quantitative easing’s (QE)” the Federal Reserve expanded its balance sheet by $2 Trillion. All this fiscal and monetary stimuli and here we are at the threshold of another recession only two short years after the supposed end of the last one. What happened?

Economists still have not arrived at a definitive explanation on what caused the Great Depression and why it persisted for so long. As discussed above, Keynes felt the Federal Government needed to step in to revive “animal spirits”, while Friedman speculated the Federal Reserve should have embarked on a very loose monetary policy. While we are not macro-economists by any means, we believe in the current circumstance neither fiscal nor monetary policy has effectively addressed the elephant in the room, the tremendous debt piled up over the last decade. Indeed, policies have been instituted to increase rather than reduce total debt outstanding. The bailouts of the last four years have simply moved debt from the private to the public sector. In addition, the government has resorted to temporary fiscal gimmicks such as payroll tax reductions to sustain consumer spending. The Federal Reserve has lowered short-term rates to near zero and bought treasuries to reduce long-term rates all in an attempt to prevent debt deleveraging. As a result of these inducements total debt outstanding has increased and the needed debt cleansing process has been postponed. Figure 1 shows total public & private debt outstanding as a proportion of GDP. 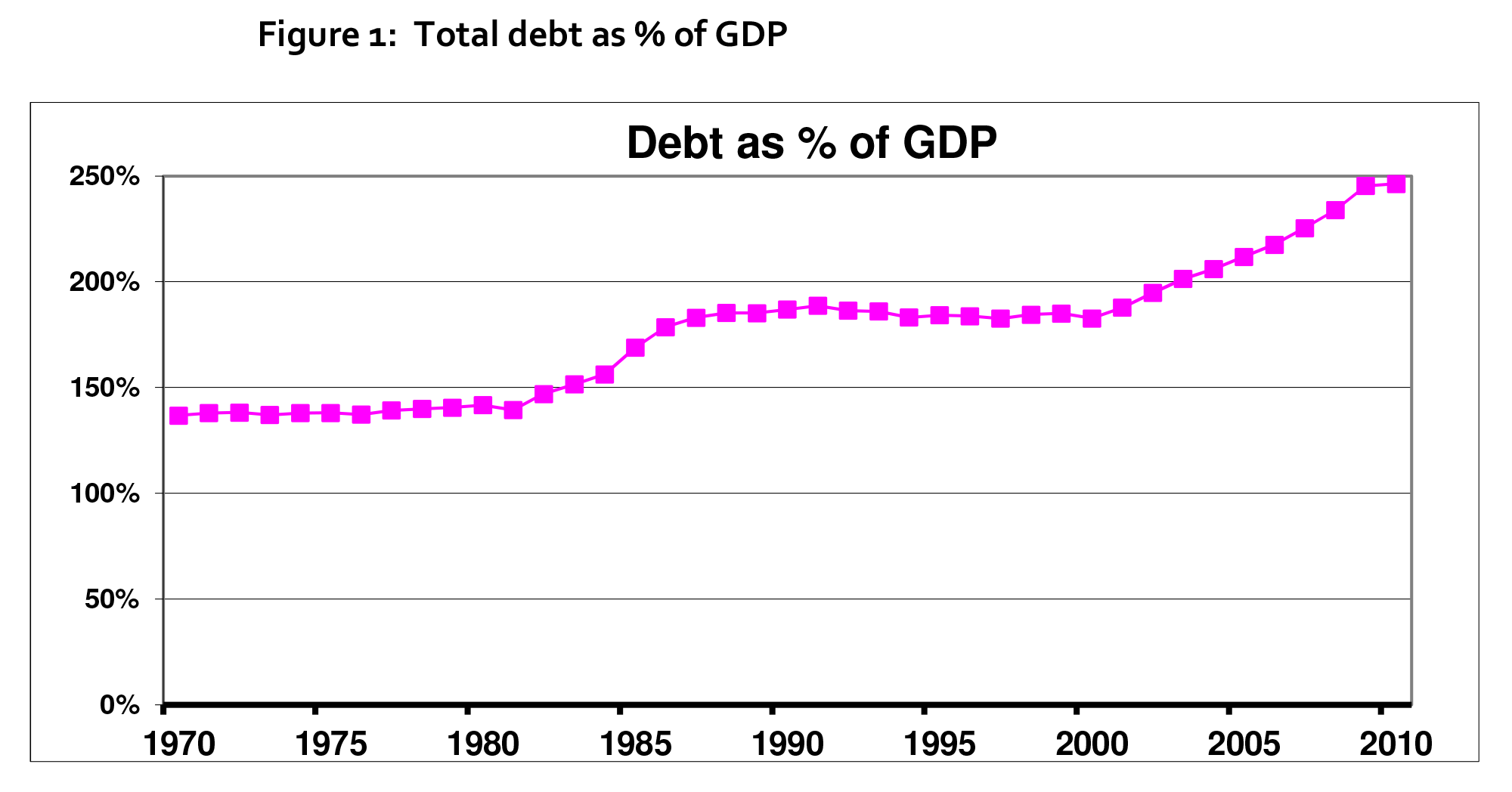 Figure 1 shows the buildup in debt in relation to income (GDP) that began in 2000 continues apace. The small reduction in household debt has been more than offset by the increase in federal and state government debt. In our opinion, until and unless the current debt trajectory is reversed, any fiscal and monetary stimulus will be ineffective and likely counter-productive.

In addition to the aforementioned debt plaguing the economy there is another serious issue that bears investor attention, the lack of real income growth. An economy suffering from too much debt is a problem, however an economy suffering from both too much debt and stagnant wages is debilitating. Figure 2 depicts nominal wages per capita since 1929, the start of the Great Depression. During the recession of 2008-2009 wages per capita fell by 5% before rebounding in 2010. Figure 2 is a bit misleading since wages can be artificially trumped up by inflation. Real wages, adjusted for inflation, is a far better metric to measure improvements in standards of living over time. The printing presses of the Federal Reserve have been working overtime in recent years in an effort to spur inflation. Headline inflation, as measured by the consumer price index (CPI), has reached 3.5% recently. Figure 3 shows per capita wages adjusted for inflation. 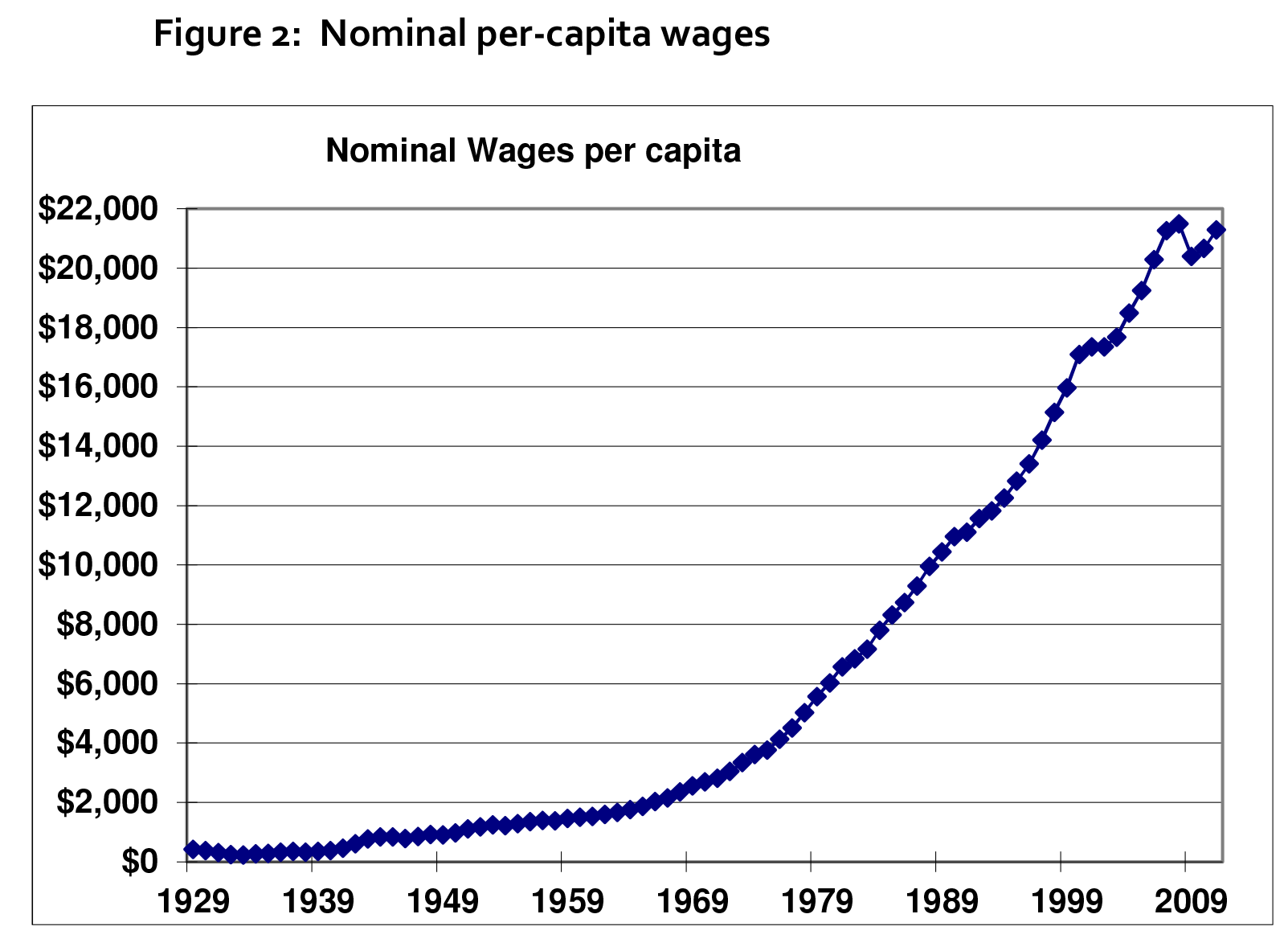 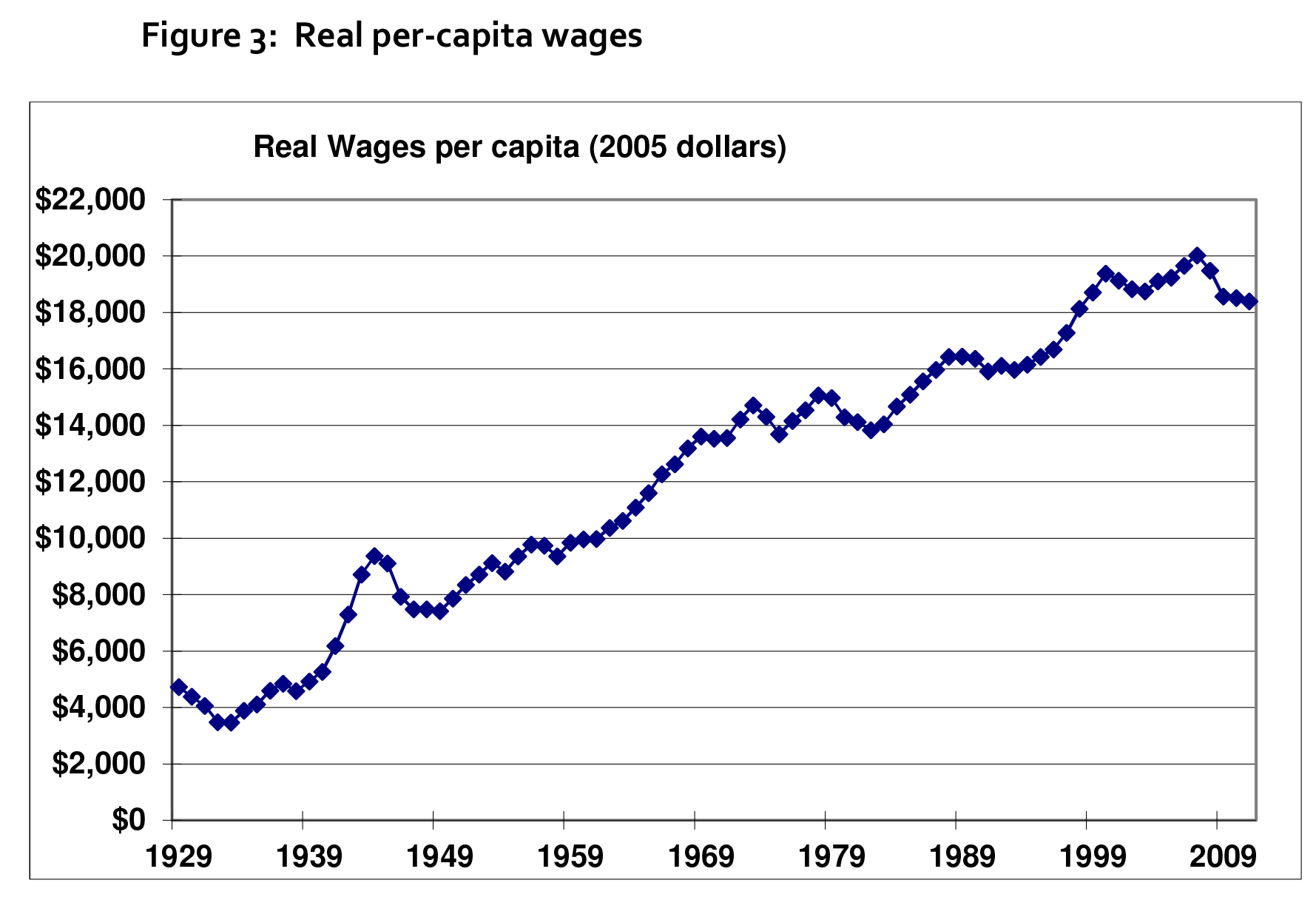 The striking feature in Figure 3 is the realization that real per capita wages (including bonuses) in 2011 is projected to be at the same levels as 1998! This has truly been a lost decade. Since per capita wages in 2011 are expected to be lower than in 2003, the end of the 2001 recession, a case can be made that as far as incomes are concerned the US economy has been stagnating for the last 14 years. Table 1 below compares the current stretch of income weakness to previous episodes.

Table 1 portrays our current predicament quite unfavorably to past misfortunes. For example, the Great Depression began in 1929 and hit bottom, as far as real wages were concerned, in 1933. By 1938 real per capita wages were back to levels that existed at the beginning of the recession ten years earlier. The downturn lasted five years, with living standards restored in ten years. Similarly, the 1970 stagflationary period began in 1973, bottomed ten years later in 1982, and by 1984 real wages were back to their prior peak. In this downturn, however, it took 12 years to bottom (if 2011 is indeed the bottom) and will probably take a few more years to get back to the 2000 peak. The duration of the current troubles will therefore be longer than during the Great Depression or even the 70’s!

The evidence, so far, seems to show that the unprecedented fiscal and monetary stimuli have had minimal salutary effects on the economy. Indeed, the authorities seem to be prolonging the malaise by instituting short-term gimmicks such as cash-for-clunkers, temporary tax rebates, and quantitative easing while not addressing the fundamental problem hobbling our economy, the enormous debt built up during the credit bubble. Looking at real incomes we see that standards of living are back to 1998 levels. The duration of the current “bad patch” exceeds any recessionary period over the last 80 years. Hard as it is to believe, Table 1 also portrays good news. We are closer to the end than the beginning of this “bad patch”. The ingenuity and adaptability of the US economy has always propelled us out of hard times in the past and we expect history to repeat itself once again. As for the question posed at the beginning of this note: well, Keynes and Friedman are no longer with us! May they rest in peace!

The views expressed in this note are as of the date initially published and are subject to change without
notice. Alamar has no obligation or duty to update the information contained in this note. Past
performance is not an indication of future results. Risk is inherent in investments and involves the
possibility of loss.

This publication is made available for informational purposes only and should not be used for any other
purpose. In particular, this report should not be construed as a solicitation of an offer to buy or sell any
security. Information contained herein was obtained and derived from independent third-party sources.
Alamar Capital Management, LLC believes the sources are reliable; however, it cannot guarantee the
accuracy of such information and has not independently verified the accuracy or completeness of such
information.

This publication, and the information contained herein, may not be copied, reproduced, republished, or
posted in whole or in part, in any form or media without the prior written consent of Alamar Capital.