While it’s only been six months into a new year, it seems like a decade has gone by! To say this year has been full of surprises would be a severe understatement. Even in our worst nightmares we are unable to dream up a sequence of – a worldwide pandemic, racial divisions & protests, severely disparate health outcomes from the pandemic crowned with inept leadership in response to the rolling crises! We sincerely hope you and your loved ones are staying safe and well during these tumultuous times.

This is our third crisis since we began our investing career over two decades ago. First was the technology & telecom bubble and subsequent crash in the late 90s, followed by the housing and financial crises of 2007-2009. Now we face a healthcare and societal breakdown driven by the SARS-COV-2 virus. This crisis is much worse than the others because of its speed and the large number of fatalities primarily driven by unpreparedness and incompetence. Even now, over six months into the pandemic, policy makers are still stumbling around with no cogent response.

One thing that has not changed this year is the narrowness of the US stock market, driven primarily by FAMAA (Facebook, Amazon, Microsoft, Apple and Alphabet). We wrote extensively about this phenomenon in the past and will not belabor the point in this note. The S&P500 was down 3% in the first half of this year, but excluding these five names, the market would be down over 11%! This stark difference in performance, in our opinion, explains in large part, the divergence between the dismal state of the real economy and the optimism of the stock market. As you are aware, our portfolios have performed very well this year despite not investing in these crowded investments.

Like many of you, we have spent an inordinate amount of time in the last few months reading and trying to understand the science and progression of COVID-19. In this note we will share some of the results we find interesting. We will close with some general observations of the investing landscape as we see it midway through this very consequential year.

Also noteworthy – we moved into new offices earlier this year (a few blocks from our old location) and our registration with the SEC went into effect a few days ago. Clients all over the country can now utilize our services.

In this section we will attempt to distill what we know about the virus (SAR-COV-2) and the resulting disease (COVID-19). We will also provide references so you can verify all of our statements. As much as possible we have ignored the media, the so-called TV-pundits and politicians but instead relied on published science. Needless to say, this is a novel virus and scientists continue to unearth new findings. We are nowhere close to fully understanding the long-term effects of this pandemic.

The good news about this disease is that with a few simple steps and good leadership it can be controllable. Countries such as China, Australia, South Korea and Singapore have shown how it is done. Even countries such as Spain and Italy that were caught by surprise and entirely unprepared have now brought the disease spread under control.

Figure 1 plots the new cases (7 day average) and deaths (7 day average) in Italy since the onset of the pandemic. As you can see, Italy was overwhelmed by cases at first and was on the front page of the news daily in March and early April. Cases peaked in late March followed by deaths a week later and since then both have trended down. The figure for Spain, another country hit very hard early on by the pandemic, looks similar. 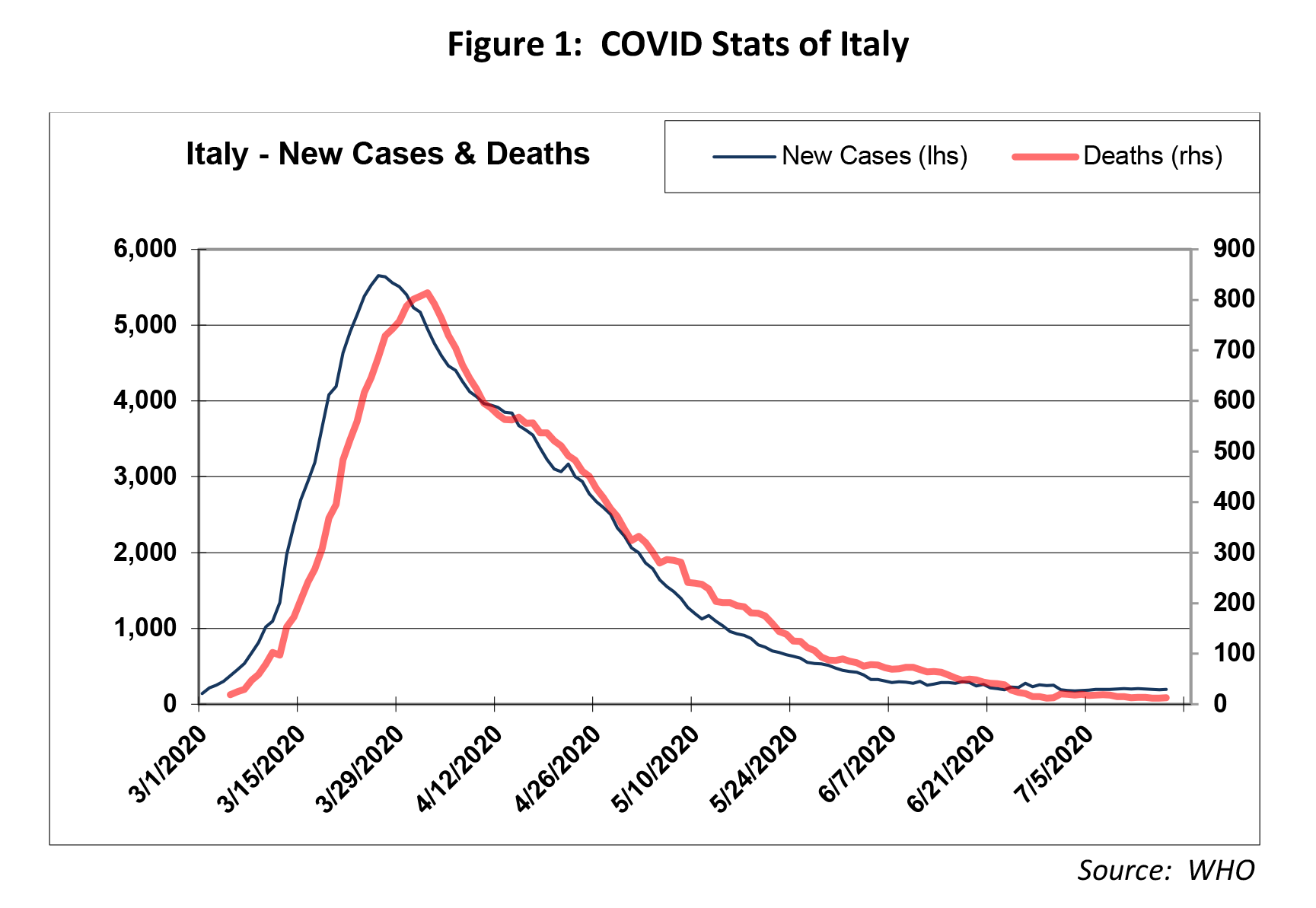 After being taken by surprise and overwhelmed by the rapid speed of transmission, the Italian government instituted full lockdowns of certain cities to slow the spread. Obtaining reliable and current data on outbreaks allows governments to stamp out the viral fire.

Unfortunately, here in the US the threat detection and responsiveness continues to disappoint, even now, six months into the crisis. Figure 2 plots the same statistics for the US. 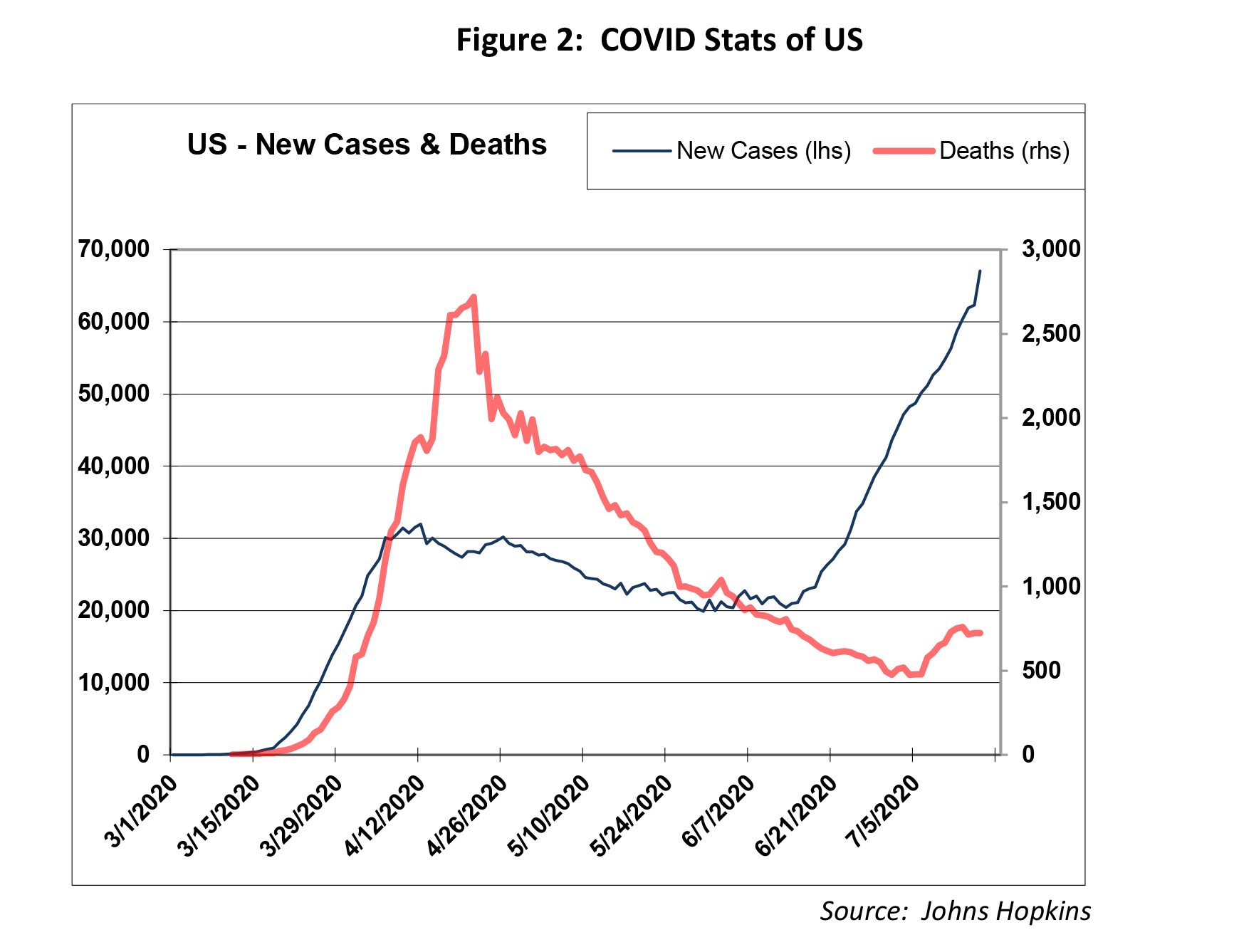 As seen in the plot, the US did not experience the rapid onset of cases until two weeks after Italy, beginning mid-March. Since then the virus continues to spread, primarily due to haphazard, uncoordinated leadership. Hotspots flare up followed by a temporary, porous lockdown but the virus quickly reemerges with more strength once the restrictions are lifted. Death numbers came down but are now trending up after bottoming at roughly 500 a day.

After surveying the responses of various countries and reading papers in scientific journals, we are optimistic of the disease prognosis. Here are a few of our observations:

The disease can be brought under control with the implementation of the right policies (see Italy, Spain and the State of New York).

We conclude, based on the evidence so far, the virus that induces COVID-19 will be with us for a long time. It will be very difficult to completely eradicate. The virus will likely mutate over time as influenza viruses do. However, as in all prior pandemics, we can, with the right policies, bring the current one under control.

While we did not anticipate the onset of this pandemic at the start of this year, we were nevertheless well positioned coming into the crisis. Many of our long-term investments have done very well this year such that we are comfortably ahead of market benchmarks. Moreover, we took advantage of the selloff earlier this year to initiate new positions in companies that were on our radar for many years.

The trend toward passive investing continues unabated and this year in particular has seen a dramatic acceleration. As we have noted in the past, passive investing leads to the larger weighted companies in an index garnering a disproportionate share of investor dollars. All else equal, these flows lead to share prices of larger names rising faster than the rest which in turn attracts more investor attention – a self-fulfilling cycle of riches! This year provides clear evidence of this phenomenon. The market, as defined by the S&P500, is down 3%. Remember, exclude the top five names (FAMAA) and the remaining 495 stocks are down 11%! FAMAA as a group is up 32% this year. Investors without these five names in their portfolios most likely have severely underperformed the market. This phenomenon continues throughout the capitalization spectrum. Take a look at Table 1 below – 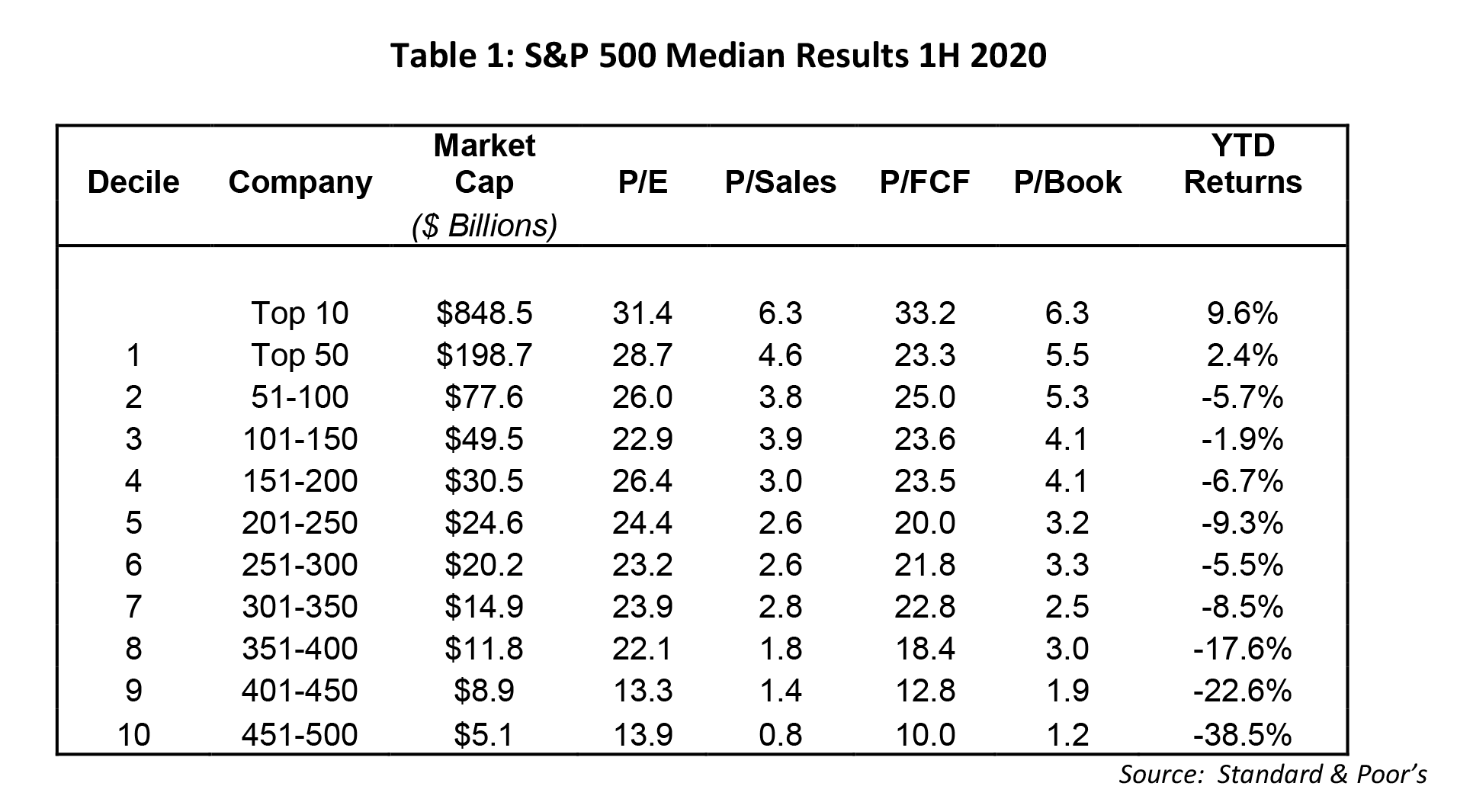 The table clearly shows the effect of passive investing on the market. The highly weighted names (Top 10) are up almost 10% while the bottom decile is down almost 40%. In fact the returns are well correlated with size decile. As flows get invested in the larger names valuations get pushed up as seen from the various metrics – Price/Earnings (P/E), Price/Sales, Price/Free Cash Flow (P/FCF) and Price/Book. All these metrics show a similar trend – the top capitalization deciles are more expensive than the bottom ones. Our investment sweet spot is usually in the range of $5 Billion to $50 Billion in capitalization. The median market cap of the Alamar portfolio at the end of June was $13.5 Billion, the 7th decile of Table 1. Despite falling in the higher decile and not holding any of the FAMAA stocks, we have comfortably beaten the market so far this year.

Looking forward, we expect the investment landscape to change considerably as we work through the after effects of this crisis. Industries such as hotels, retail stores, large office buildings, dense apartment complexes, restaurants and more will be severely impacted. Financial institutions with large exposures to these industries will also be under scrutiny. As discussed, the dramatic difference in health outcomes of the poor and minorities in particular will most likely engender a societal response. We are already seeing the initial steps being taken. Health care and delivery will be under scrutiny. The CDC and the FDA were caught unprepared when the virus arrived. Personal Protective Equipment (PPE) was unavailable and lack of testing capabilities handicapped an effective response. We expect government at all levels to invest in healthcare infrastructure to avoid a recurrence. As in prior crises and recoveries, we expect investment opportunities to arise and we will be on the lookout for well managed companies at reasonable valuations.

This year will be remembered for generations. A worldwide pandemic caught us severely unprepared. The lack of investment in healthcare infrastructure, inadequate information systems and poor, confusing leadership resulted in a chaotic response. While we are still attempting to comprehend the outbreak, other countries have already brought the disease under control.

The stock market, on the surface, seems disconnected from the damage to the real economy. However, a look under the hood shows wide disparities. A few popular names are driving all the returns while the vast majority of stocks are falling behind. As in the past, great investment opportunities present themselves during times of crises, and we are on the lookout to invest in them.
Thank you for your continued trust and confidence in Alamar Capital Management.