In our fourth quarter 2014 letter we discussed how valuations had become frothy and we were having difficulty finding suitable investments. Six months into the year our forecast has been borne out, the S&P500 is up roughly 1% through the end of the second quarter. Despite holding a sizeable portion of cash, our accounts are up roughly 6%, net of fees. Since inception in 2010, Alamar Equity is up 17% annualized while the S&P500 is up 14.2% during the same period.

In addition to high valuations, this year has brought on two additional headwinds (exchange rates & commodity prices) which will restrain economic growth. We will discuss both these issues in this letter.

The ongoing Greek crisis in Europe, problems in Russia, slowdown in China and upcoming rate increases indicated by the Federal Reserve have led to a rush of investments into the US Dollar. As a result the dollar has strengthened and, conversely, currencies across the board have weakened. Figure 1 plots the trade-weighted value of the US Dollar against a basket of currencies. 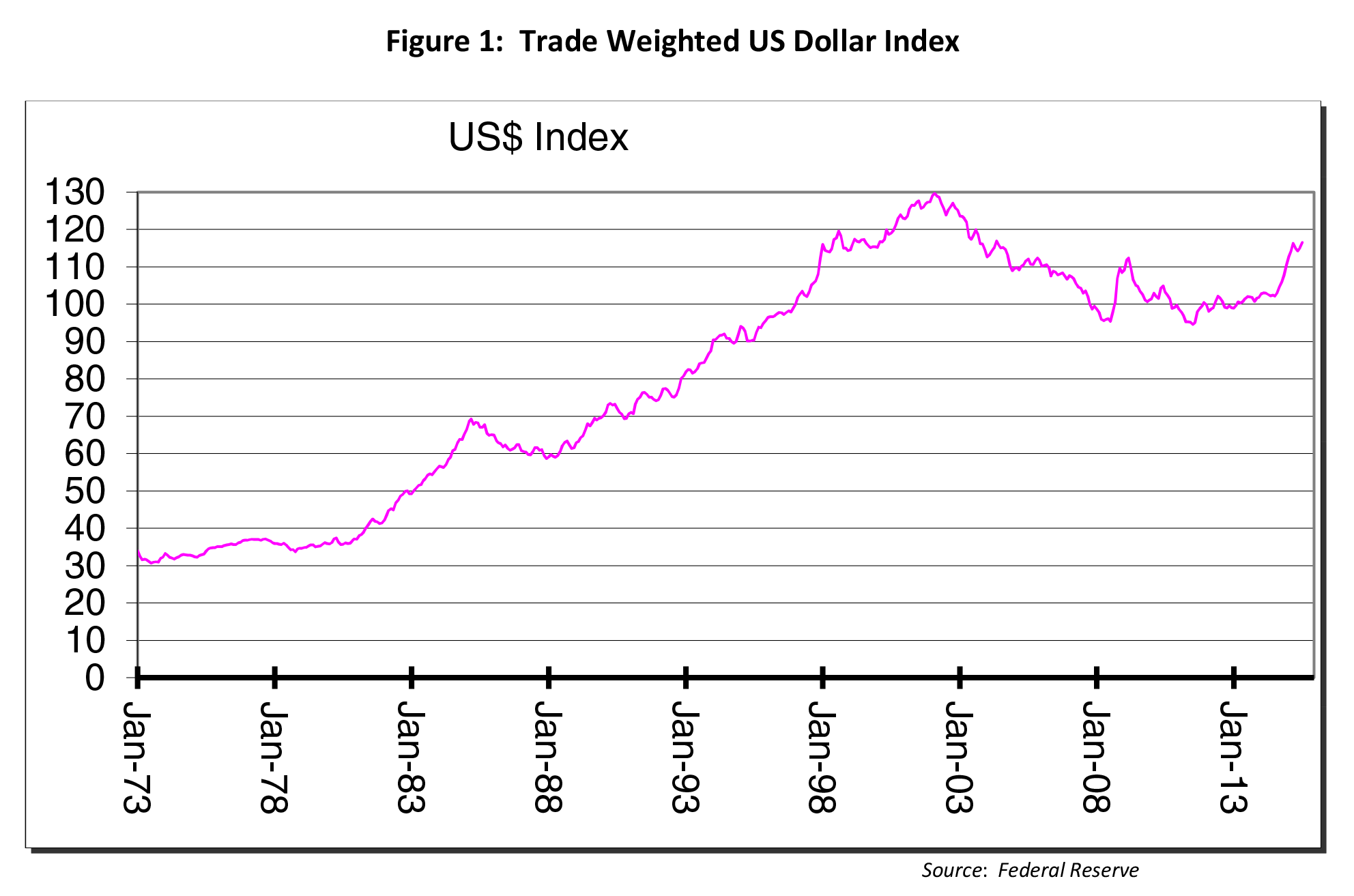 As of June the dollar is up 12.5% over the previous year against a broad basket of currencies. The dollar is not too far off its 40-year high reached in early 2002. This creates a tremendous headwind for US based exporters and, if sustained, could potentially lead to more jobs and factories moving offshore to take advantage of weaker currencies elsewhere. The weakness of the Canadian dollar and the Mexican Peso, in particular, bears scrutiny because of geographic proximity and widespread cross-border trade. Both these currencies are now hitting multidecade (Canadian) or historical (Mexican) lows against the US dollar.

The other headwind buffeting the economy worldwide is commodity prices. While some industries and countries benefit from low commodity prices (US, China, India to name a few), there are many others that will be hurt such as our neighbors Canada and Mexico and other commodity-exporting nations such as Australia, Brazil & Russia. Figure 2 plots the prices of two widely used industrial metals, Copper & Aluminum, over the last decade. For ease of comparison the prices are indexed to 100 at the start of 2005. 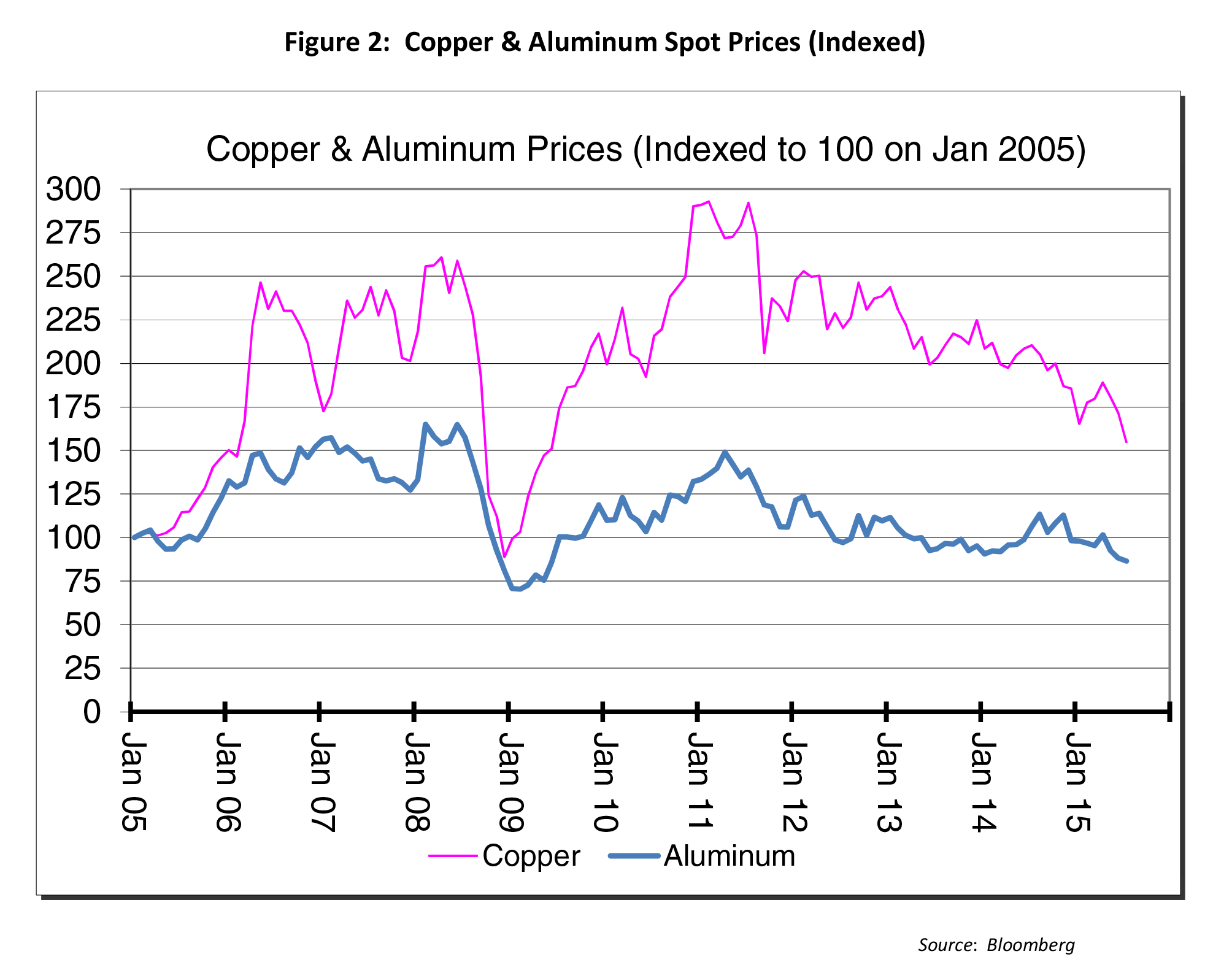 Both Copper and Aluminum are telling similar stories. Prices dropped during the 2008 US recession and subsequently rose driven by demand from China. Since peaking in mid-2011, spot prices of both metals have been on a steady decline reflecting weakness in the industrial markets.
A very similar situation is playing out in the energy commodities (Oil & Natural Gas). Figure 3 depicts these prices. 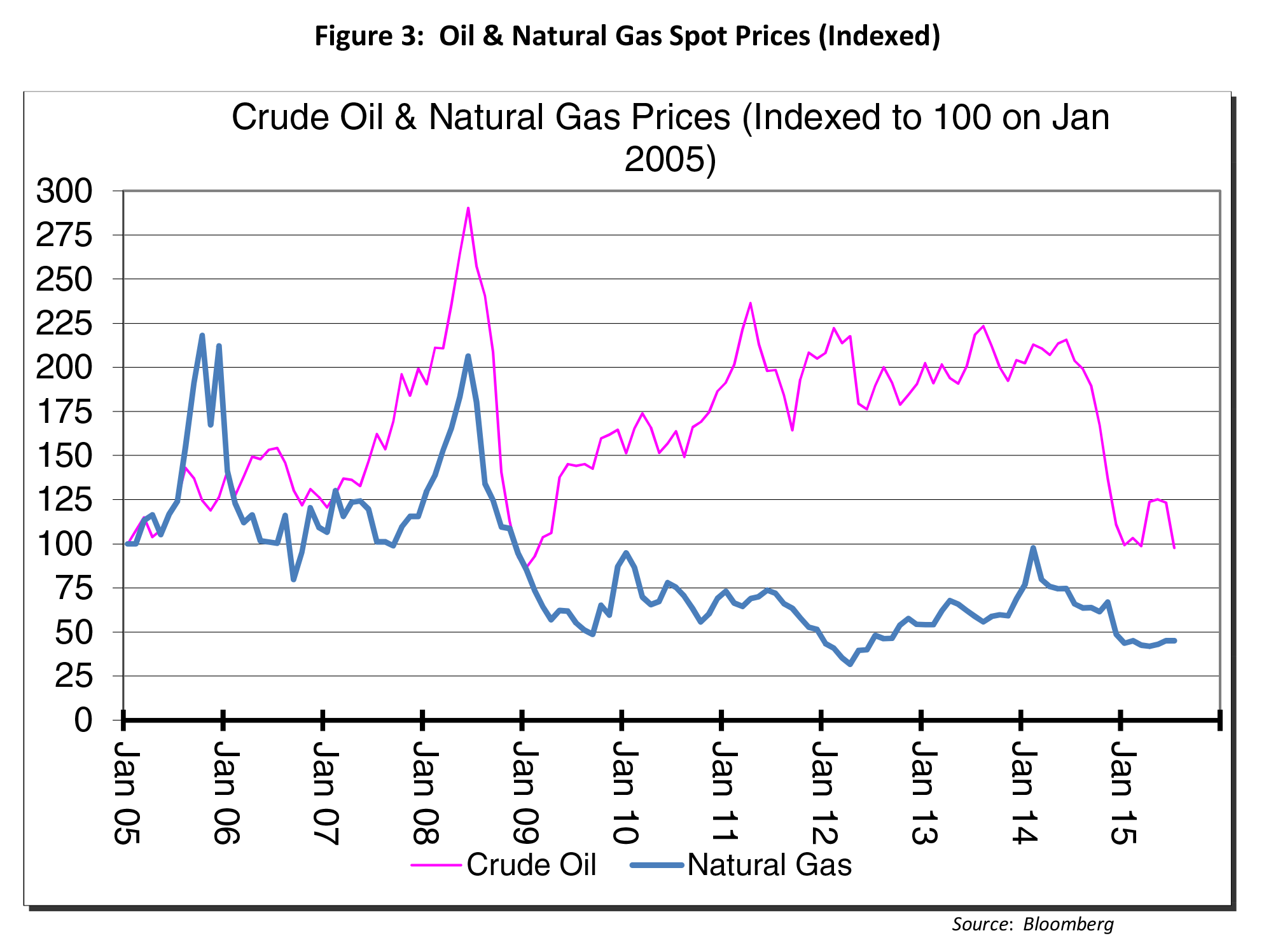 While Natural Gas has stayed at a low base since the 2008 recession, Crude Oil (West Texas Intermediate) followed a trajectory similar to Copper with the decline happening more recently, late last year. Excess supply, particularly in the US, has led to a glut of crude oil, with bulging inventories and depressed prices. 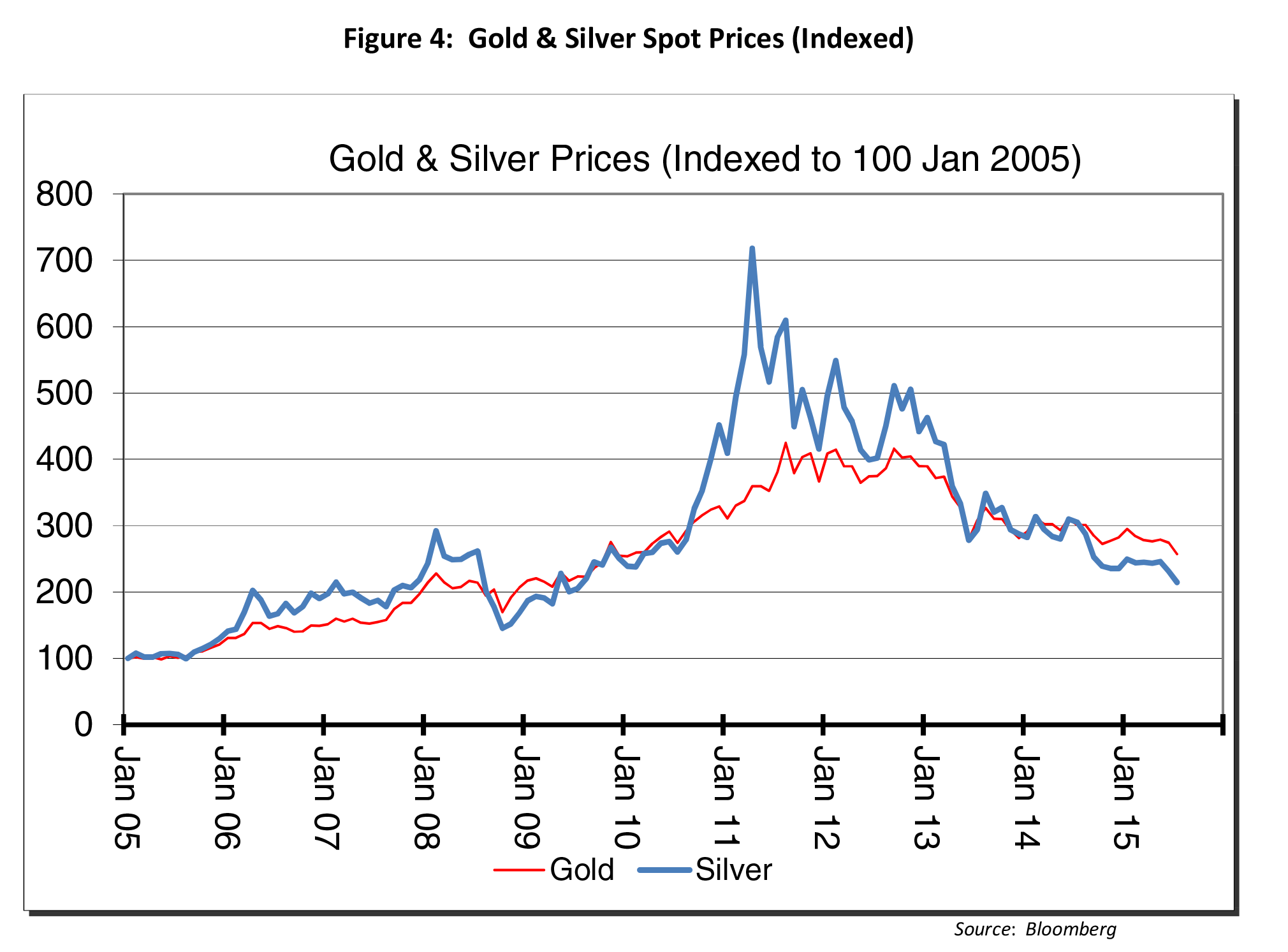 We owned both Gold and Silver, through ETFs, in 2010, but exited Silver in mid-2011 and Gold in early 2013. The fever of owning Gold seems to have cooled as the threat of inflation has receded and the 2008 financial crisis is a distant memory.

The decline in commodity prices, while beneficial to consumers, will have a deleterious impact on miners, Oil & Gas producers, and industrial companies that supply equipment to these industries. While we had no direct exposure to miners, we did have some exposure to Oil & Gas companies. We eliminated most of these positions last year and exited the final one this quarter.

Coming into the year we expected the market to be challenging due to high overall valuations and so far this year that has come to pass. The strength of the dollar and the weakness in commodities has affected parts of the economy where we normally find attractive investments such as transports and industrials. In fact as the headwinds have gotten stronger, the market is increasingly driven by a few names such as Google, Apple, FaceBook, Amazon and some biotech highfliers. As you know, we prefer to invest in reasonably priced, well-managed, growing companies away from the investing crowd. We have stayed away from these names since our inception and done quite well despite their absence. Notwithstanding these challenges, we continue to look for attractive investments in a disciplined fashion.