The markets continued their run in the first half of this year after a very strong 2013. Our equity accounts are up roughly 2.7%, net of fees, for the year. Since inception in 2010 our investments have cumulatively grown 120% (19.2% annualized, net of fees) while the S&P500 is up 93% (15.7% annualized). We have underperformed the S&P500 this year primarily because of disappointing performance from 2 of our holdings (which did extremely well last year) and our lack of exposure to large, well-known companies such as Apple & Microsoft which have done well this year and contributed meaningfully to overall market performance. Over the long-run we do expect to outperform the market due to our opportunistic, long-term investing style.

A market phenomenon that caught our attention this year has been the strange divergence between the performance of the stock market (all-time highs) and the bond market (10 year Treasuries near all–time lows). We will share our thoughts on this very important topic in the rest of this note.

In a surprise to many market pundits, the stock market continues to hit new all-time highs on a regular basis this year. The performance is primarily being driven by large dividend paying stocks, particularly in the utilities sector. Smaller capitalization companies have not really participated in this year’s rally (the Russell 2000, an index of 2,000 smaller companies, is up a little over 3% for the year through June). The table below shows year-to-date performance of various sectors of the S&P500. 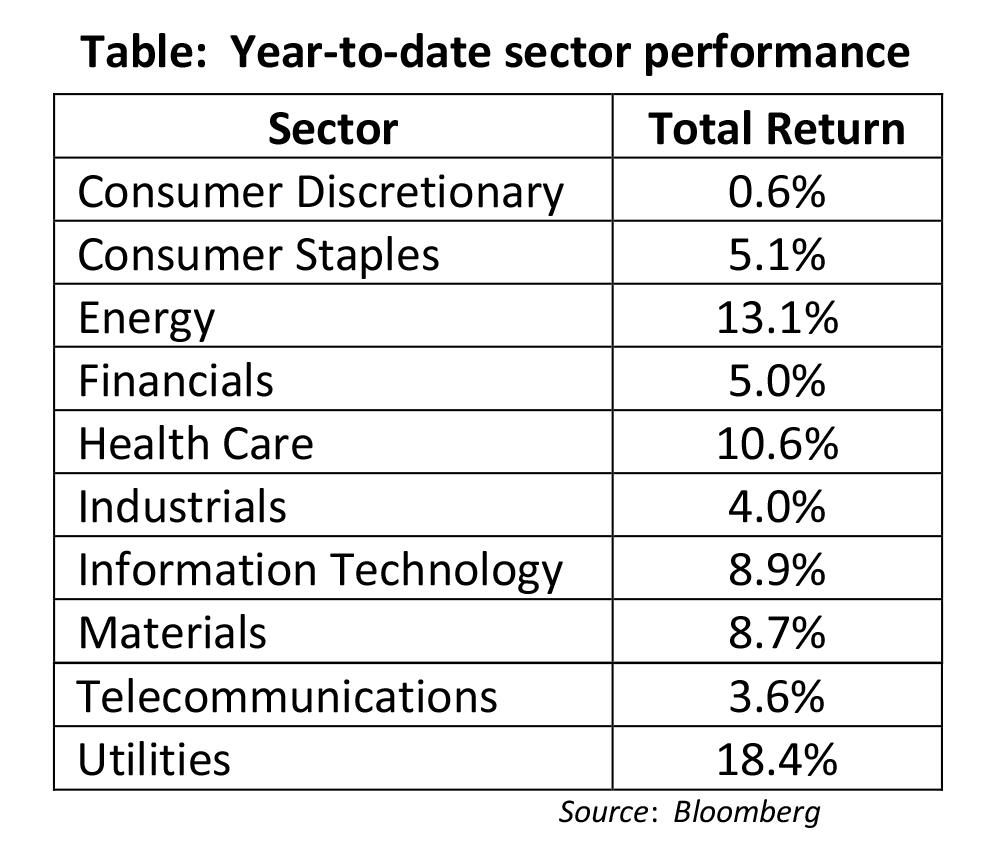 A rising stock market reflects the equity investor’s view of current and future growth in the overall US economy. Expectations of future growth should, all else being equal, also drive interest rates higher and this has not come to pass and therein lies a conundrum. The bond market, as exhibited by 10 year Treasury rates, does not share the sunny disposition of the stock market. Figure 1 depicts the 10 year US treasury rate since the year 2000. We picked the 10-year treasury since it captures a long timeframe and is a very liquid security. 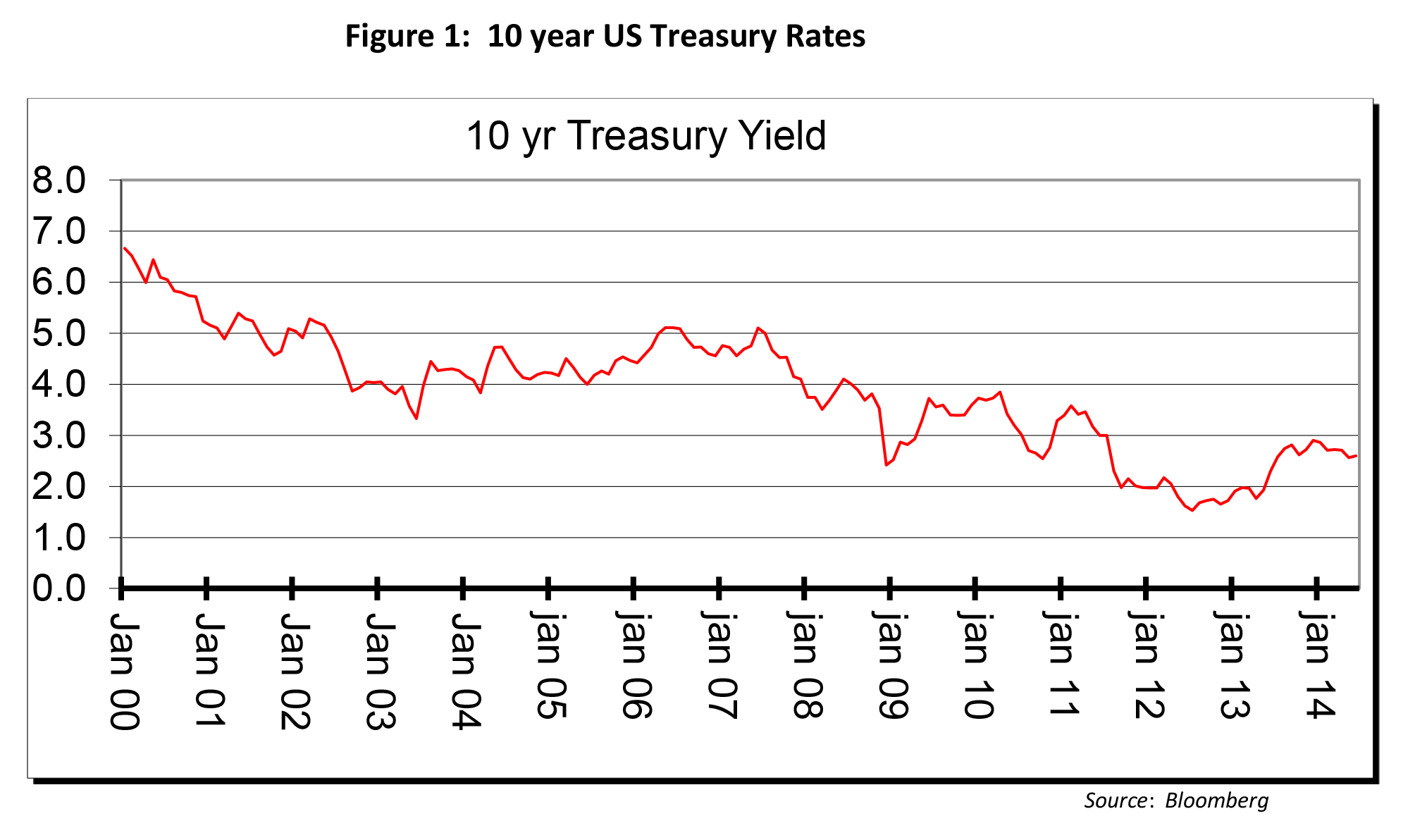 As can be seen from the figure above, bond investors have driven rates to extremely low levels, barely above inflation. Imbedded in these rates are their expectations of very low economic growth in the future. We will attempt to frame the debate between stock and bond investors by looking at each point of view.

VIEW OF THE STOCK MARKET

There is a widespread, prevailing view that the stock market is in a bubble and is now disconnected from the underlying economic fundamentals. We are not believers of this school of thought. While there are pockets of mania in specific sub-sectors of the market, we are unwilling to describe the entire market as detached from reality. As equity investors, we look at a wide variety of measures, both macro and company-specific, to give us indications of overall economic performance. One measure we have followed for a long time is railcar loadings. We have historically invested in rails although we have none at the present time. In our opinion, railcar loadings provide a sound indicator for current economic performance. A wide variety of products including lumber, petroleum, general consumer goods and automobiles are shipped by rail. Rails provide a cost-effective transportation solution for long distance shipping especially during a period of high gasoline prices. Figure 2 depicts railcar loadings since 2001. 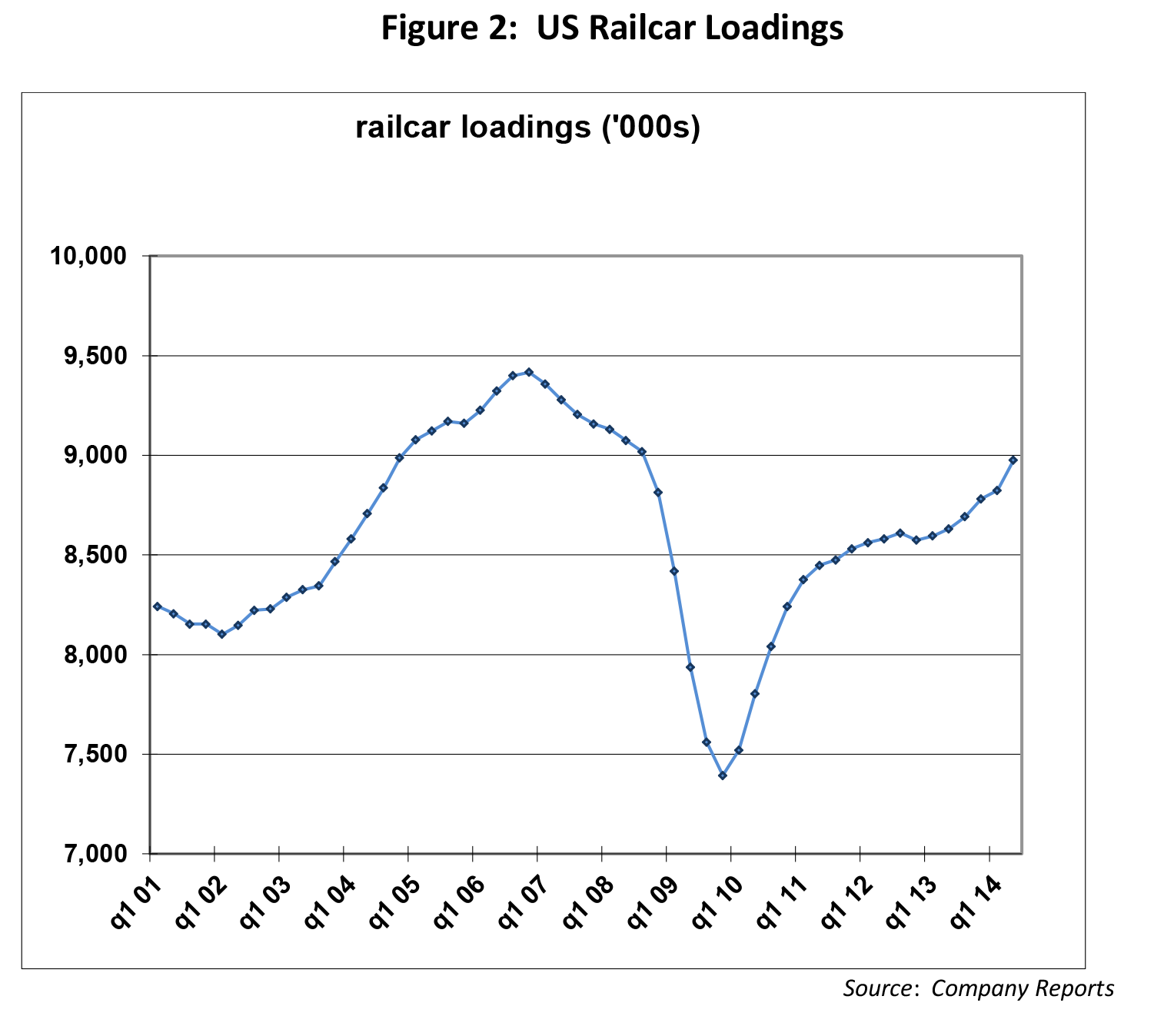 As depicted in the graph above, rail loadings peaked in the fourth quarter of 2006, a full year before the onset of the Great Recession. Rail volumes subsequently declined over 20% before bottoming in the fourth quarter of 2009. Volumes began recovering in 2010, the same year Alamar began operations, and have grown to almost 9 million loads in the most recent quarter. We are not too far off from claiming the prior shipment peak.

Other transportation indicators such as package shipping volumes and truck loads tell a similar story. These indicators are supportive of a growing economy and therefore a rising stock market. The bond market, however, disagrees with this conclusion.

VIEW OF THE BOND MARKET

A 2.5% 10-year treasury yield is not consistent, under normal conditions, with the economic growth we are presently witnessing. Bond investors are looking at very low real returns with inflation averaging 2%. They expect inflation to fall or the economy to contract (recession) or both in the near future. Some of the explanations given for such low yields are as follows:

There could be other explanations but these are the ones we commonly come across in our readings. As you can see, the explanations leave us unsatisfied. Bond investors and stock investors are looking at starkly different worlds.

The widely diverging outlook of the economy by stock and bond investors is of concern to us. Most indicators we track show the economy continues to grow, albeit at subpar rates. However, bond investors do not share this sanguine view and we, as equity investors, need to remain vigilant.