The market rally continues as fear and skepticism slowly give way to greed. Coming into the year investors were worried about the impact of higher taxes and reduced government spending on the economy and the markets. Despite these macroeconomic headwinds the US economy continues to motor higher and the stock market even more so. The new investor worry is the tapering of treasury purchases (and thus money printing) by the Federal Reserve. Some investors believe that the economy is levitating on the back of copious liquidity generated by Fed money printing. Take away the printing press and voila the economy sinks into the doldrums. We are not avid followers of this school of thought. We believe the economy can overcome this hurdle, too. Through the second quarter we are up 15.3% for the year, after fees, while the S&P500 is up 13.8%. Since inception in 2010 we are up 74.3% cumulatively, net of fees, and the S&P500 is up 54.7%.

During the quarter we had the opportunity to attend the always interesting UCSB Economic Forecast Project. One of the speakers at the conference made a comment that grabbed our attention. He suggested that higher capital requirements, as mandated by Dodd-Frank, will necessarily lead to less bank lending and act as another economic headwind. This note will explore this concept further.

This writing will also evaluate the health of the US consumer, the primary driver of the economy. Specifically, we will look at the relative positions of the wealthy and the rest.

BANK LENDING IN THE FACE OF HIGHER CAPITAL

The typical narrative from the banking industry is that higher capital requirements will lead to less lending. While this argument has some merit, we feel there are countervailing forces unleashed that could spur lending due to higher capital requirements. For instance, a bank with a large capital cushion can take more lending risks than a bank backed with less capital. All else equal, regulators will be less concerned with a well-capitalized bank growing its loan book compared to a thinly capitalized bank.

Instead of speculating on hypothetical scenarios we decided to look at the empirical data. We gathered a list of the largest national banks (Bank of America, JP Morgan, Wells Fargo, and Citigroup), super-regionals (Capital One, BB&T, PNC Corp, US Bancorp, and SunTrust) and some smaller regional banks. In total, these banks had over $4 Trillion in loans outstanding as of the end of 2012. Loan growth from 2011 to 2012 of this sample of banks was compared to tangible equity capital. We think tangible equity capital as a percent of total assets is a good measure of the capacity of a bank to sustain loan losses without resorting to bailouts by taxpayers. Figure 1 plots loan growth to tangible equity capital. 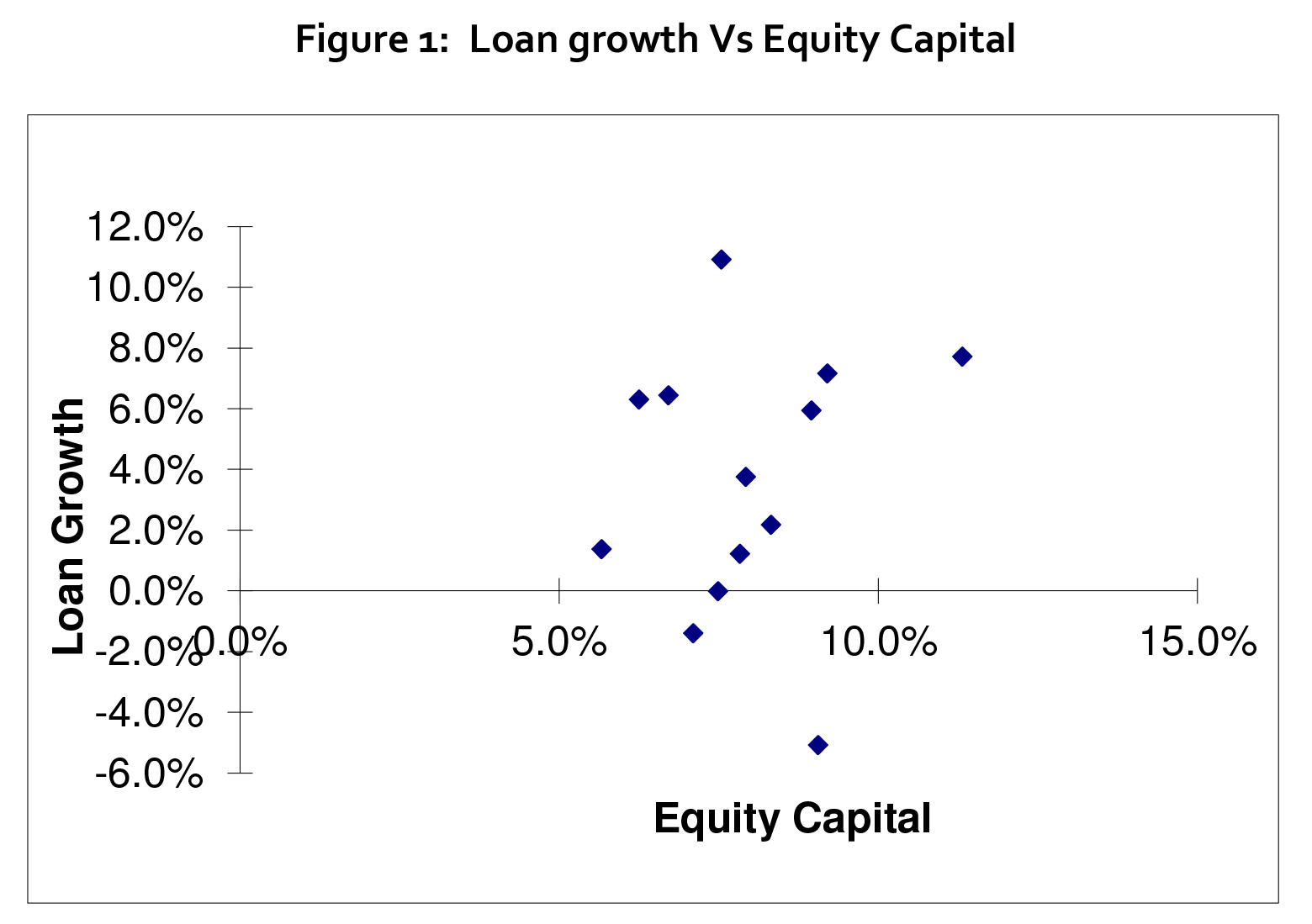 Figure 1 depicts that the relationship between loan growth and equity capital is not very clear. However, with the exception of one bank (Regions Financial), there is a trend of well capitalized banks showing better loan growth. The Dodd-Frank bill requires regulators to emphasize higher capital requirements as the first line of defense in case of a financial crisis. We believe, based on the evidence shown above, that not only will the banking industry be more resilient but will also exhibit better loan growth from higher capital.

One of the primary avenues the Federal Reserve is using to jump-start the US economy is through the wealth-effect. In a nutshell, the economic theory of the wealth effect posits that if consumers feel wealthy from inflated assets they will spend more money. The Fed, following this dictum, is attempting to get the party going. It has lowered short-term rates to almost 0% to spur borrowing and it has printed money to buy long-term treasuries to lower long-term rates as well. Lower rates have spurred investors to invest in more risky assets thus pushing prices of risky assets higher. The primary beneficiaries of this Fed largesse has been the wealthy who own a disproportionate share of risk assets such as stocks and corporate bonds. And the wealthy segment of the population is following through just as the Fed postulated. Nowhere is this more apparent than in the sales of the perennial rich-man’s toy, Porsche. Figure 2 depicts the US sales of Porsche vehicles in contrast to total automobile sales since 2001. Since Porsche represents less than 0.5% of the overall market, we have indexed both series to 100 at the beginning for ease of depiction. 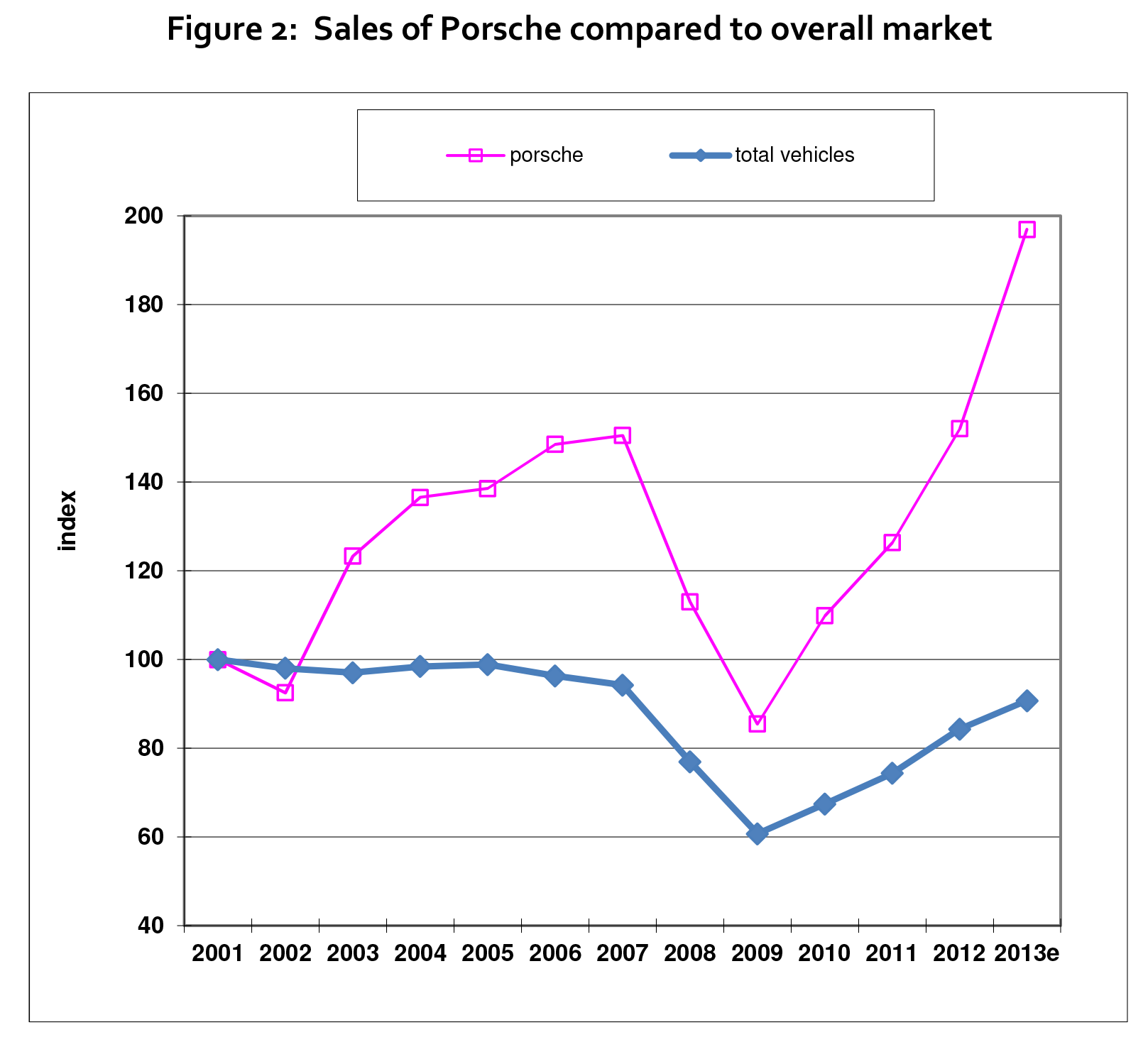 THE HELICOPTER IS READY TO GET SOME REST

“If the incoming data are broadly consistent with this forecast, the Committee currently anticipates that it would be appropriate to moderate the monthly pace of purchases later this year; and if subsequent data remain broadly aligned with our current expectations for the economy, we would continue to reduce the pace of purchases in measured steps through the first half of next year, ending purchases around midyear. In this scenario, when asset purchases ultimately come to an end, the unemployment rate would likely be in the vicinity of 7%, with solid economic growth supporting further job gains – a substantial improvement from the 8.1% unemployment rate that prevailed when the Committee announced this program.”

If the economy continues its current pace of growth, quantitative easing (i.e. money printing) will finally come to an end by the middle of next year. Bernanke will give his helicopter some well needed rest. He emphasized, however, that the Fed Funds rate will stay at 0.25% until the unemployment rate drops to at least 6.5%. Investors were clearly not pleased with the hint of an end to money printing. The S&P500 promptly dropped almost 4% led by stocks paying high dividends. The Utilities, Consumer Staples and Telecom sectors were all down 5% or more. As to be expected, Gold, the safe haven asset, was down over 5%. There is a pervasive belief amongst investors promulgated primarily by the Federal Reserve that money printing has helped lift the economy from the doldrums. It follows, therefore, that the withdrawal of the money printing medicine will send the economy back to the sick bed. No one can say for certain how much of an impact money-printing has had on the economy. It has clearly had an impact on long-term Treasuries and other income-producing safe assets as seen by the effect on high-dividend stocks. We continue to expect a slow, anemic economic recovery with or without quantitative easing.

We believe higher capital requirements for banks, as mandated by the Dodd-Frank act, will be beneficial for the economy and will spur loan growth. Quantitative easing by the Federal Reserve has lifted asset prices but seems to have disproportionately benefited the wealthy. It is not clear to us if the withdrawal of money-printing will have a severe impact on the economy but could affect certain perceived low-risk, income producing asset classes.

For our part, we continue to focus on identifying and investing in companies that meet our criteria for investment – solid businesses with attractive growth prospects trading at reasonable prices.