The U.S. equity markets came roaring back in the first quarter of 2019, shaking off the 4th quarter hangover from last year, due to weakening global fundamentals and decreasing U.S. corporate earnings. In fact, the S&P finished the first quarter within a few percentage points from last September’s highs, as stocks flourished under a more accommodative Federal Reserve (Fed) and renewed optimism about the U.S. economy.

Not surprisingly, volatility fell considerably in the quarter as well. The CBOE Volatility Index (VIX), a measure of fear in the market, spiked dramatically towards the end of last year, only to dramatically reverse course and reflect relative calm by the end of this March. For their part, the broader markets have also reversed from a difficult 4th quarter in which investments of all stripes, save for low risk bonds, proved disappointing. Risk assets across the board have provided strong gains thus far in 2019, marking it the greatest start to a year since 1998. The chart below depicts the performance across various asset classes in the fourth quarter of 2018 vs the first quarter of 2019, reflecting the markets dramatic almost mirror like turnaround. 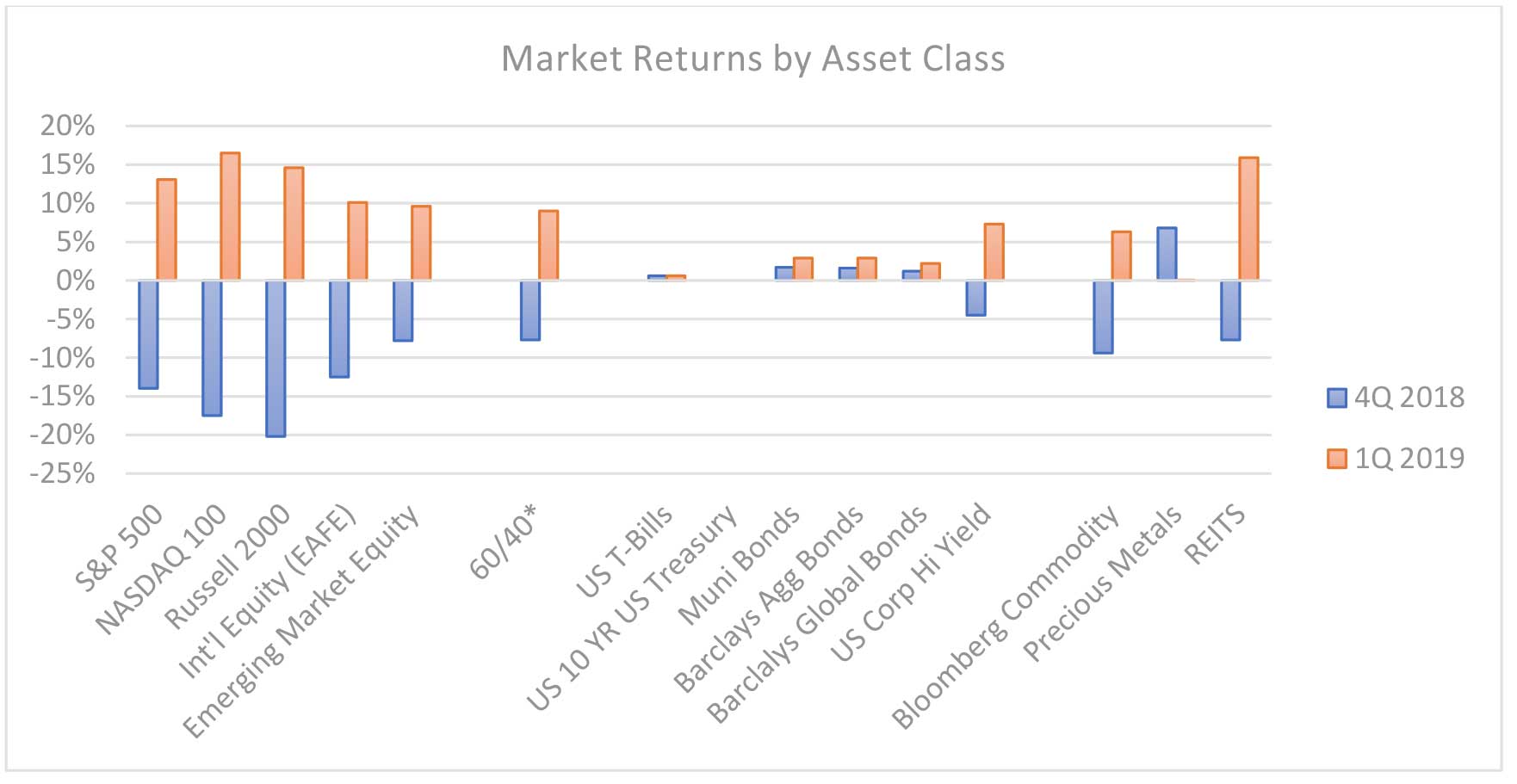 Despite the relative calm and outsized returns this year, the global economy has clearly slowed from 2018 into 2019. We suspect the three largest factors most associated with this slowdown are: tightening Fed policy, decreasing growth in China, Europe, and beyond, and continuing unresolved disputes on trade. All of which have weighed heavily on business, consumer, and investor sentiment. In fact, recognition of these near-term challenges was likely the chief culprit in dampening investor enthusiasm towards the end of 2018. Though much uncertainty remains, the market’s quick recovery in the first quarter of 2019 seems attributable to a somewhat coordinated change of heart on behalf of central banks in the U.S. and European Union (E.U.).

At the end of 2018 it remained widely speculated that the Fed would follow what had been five sequential .25% rate hikes, and nine in total, with at least two more increases in 2019 and one in 2020. However, following meetings in late January the Fed decided to bring its monetary policy normalization to an end. Summarizing the meetings, Fed Chair Powell indicated that there was no longer an accommodative or tightening slant on behalf of the Fed. The interest rate hike cycle that began in December of 2015 and had seen rates increase from .25% to a still accommodative 2.5% had come to a halt. For its part, the European Central Bank (ECB) followed suit when in early March ECB president Mario Draghi announced the extension on the forecast for its first anticipated interest rate increase since July 2011 keeping rates near zero. The chart below depicts the policies pursued by the Fed and ECB dating back to the financial crisis. Interestingly, the ECB’s initial incorrect reaction to the crisis was to view it as purely a U.S. problem. As a result, the ECB was slower than the Fed to engage in dramatic reductions in their funds rate. Additionally, a stagnant economy has forced them to leave rates lower for longer than the Fed, having not increased rates in several years.

It is now anticipated that the ECB will not move on rates for the remainder of 2019. Further, they have also recently announced an additional stimulus package to provide lower lending rates to banks in order to create better credit conditions for consumers and thereby stimulate growth. Not to be out done, after the FOMC meetings in March, the Fed further reduced expectations of rate hikes, and now project no rate hikes in 2019, a single increase in 2020 and none in 2021. This placed Fed policy much more in line with the broader bond markets which had been pricing in a higher likelihood that the Fed would cut rates than increase them. In fact, the decision by the Fed to increase rates in December of last year had been quite controversial as the bond market was already flashing warnings signs. Equally significant, following the meeting the Fed announced it would bring an end to its balance sheet Quantitative Tightening sooner than the market expected. The process will now be complete by this September. It is now anticipated the Fed balance sheet will hold roughly $3.7 trillion in bonds on a seemingly permanent basis. A figure 4 times higher than the $900 billion in bonds it held prior to the 2008 crisis! In addition to cutting rates to zero, the Fed responded to the financial crisis by purchasing massive amounts of bonds. They purchased both treasuries and, for the first time, mortgage backed securities. These measures were intended to encourage lending on behalf of banks, reduce borrowing costs for consumers, and revive economic growth. The bond buying, or “quantitative easing” that began at the height of the crisis clearly helped support financial markets. The second and third rounds, or QE2 an QE3 as they have been called, have proven more controversial. The chart below depicts the post crisis effort on behalf of the Fed and ECB to expand their balance sheets to stimulate growth. Again, the European Union (EU), which had exceeded the United States as the largest economy in the world in 2007, was slower to respond, albeit from a higher base. Further, the ECB elected to reduce assets in 2012, a period the US remained in expansion mode, only to reverse course with substantial purchases since 2015. With the recent announcement of a termination of quantitative tightening by the Fed, the U.S. more closely aligns its policy with that of the EU.

The US decision to hold off on rates and prematurely terminate quantitative tightening was driven by a slowing U.S. Economy. In early 2019 the Fed reduced growth expectations for 2019 to 2.1 percent from its 2.3 percent December of last year forecast. Their outlook for 2020 is an even lower 1.9 percent. Further reflecting a deteriorating economy, on March 28th 4th quarter 2018 US GDP was restated downward from 2.6% to 2.2%. This despite an environment when inflation and unemployment have remained quite low. Meanwhile, growth in Europe has been tepid for many years now. The following chart depicts quarterly Real GDP growth for both the US and EU and again dating back to the crisis.

Given the massive monetary support that both the US and Europe have received it is interesting that their respective economies have not seen more significant recoveries. The US has grown much faster out of prior recessions while Europe has hardly grown at all. The US economy did manage to overcome Fed expectations in the 1st quarter of this year. On April 26th, it was announced that the economy grew at a rate of 3.2%, its best start in four years, and greater than the 2.5% anticipated. This has acted to help offset fears of slowing global growth in the near term and pleasantly surprised investors.

Nonetheless, now 10 years into the recovery with rates at still low levels and given bloated balance sheets there are fewer traditional levers available to Central Banks to manage the next inevitable crisis — both would argue they have additional tools at their disposal, but this would reflect policy that has never been done before.

As a result, we suspect fiscal policy (i.e. deficits) may play an even larger role to manage the next recession. The best evidence of this might be an unconventional economic theory floating around known as Modern Monetary Theory (MMT). MMT is not a mainstream idea just yet, but it is likely you will be hearing more about it in the weeks and months to come. At a conceptual level, the gist of MMT is that governments that issue their own fiat currency, such as the United States, have considerable freedom to manage larger debt burdens than previously realized, because of their ability to print money. The core of the idea is that a country that can issue its own currency carries no default risk, as they can always just print more dollars to pay their debts.

For example, a proponent of MMT might be inclined to hold up Japan as an example. Many have argued that Japan’s large fiscal deficits and considerable debt as a percentage of GDP would eventually lead to rising interest rates and inflation, but this has not been the case. Rates in Japan have hovered near zero for many years with little to no inflation. Of course, their economy has struggled to grow for many years as well.

Interestingly, the purported merits of MMT are not nearly as potentially attractive to the European Union and its members as the U.S. After all, the EU is a collection of many countries, all of whom gave up their own sovereign currency in 1999. As a result, countries like Greece for example are not in position to simply print more Euros to fend off creditors and pay their bills. As a result, MMT may provide a unique and additional contrast in how the U.S. and European Union might be inclined to manage the next crisis.

Further, given that it is election season here in the U.S., it is easy to see how MMT might be used to solicit votes. For example, Presidential Candidate Bernie Sanders, and recently elected democratic congresswoman Alexandria Ocasio-Cortez have used MMT to support Medicare for All, and the Green New Deal. However, in truth, for many years both sides of the aisle have shown a propensity to manage deficits in support of their agendas (Democrats use them to support entitlements and Republicans to support tax reform). As MMT gives them even more fuel, it will be interesting to see if this concept continues to gain more steam.

Fortunately, though there is an undeniable correlation between the economy and the stock market, it is not an overly strong one. After all, the US stock market has performed quite well for over a decade despite fledgling growth. It also might come as a surprise to many that the stock market does just fine through recessions. The S&P 500 has averaged a 6.7% return in recessions since 1900. The far larger threat to the market, as we experienced late last year, is a sharp change in sentiment, or an unforeseen policy shift. It is also important to point out that over the long haul the real arbiter of value is growth in corporate profits. Along those lines, in our proprietary equity strategy we remain able to identify and invest in solid individual companies with good prospects. Additionally, in our Alamar Wealth strategy we continue to invest for the long term.

Thank you for your trust and continued consideration,

DISCLOSURES
The views expressed in this note are as of the date initially published and are subject to change without notice. Alamar has no obligation or duty to update the information contained in this note. Past performance is not an indication of future results. Risk is inherent in investments and involves the possibility of loss. Net of fee performance is calculated using the highest fee. The Russell 3000 Index measures the performance of the largest 3000 U.S. companies representing approximately 98% of the investable U.S. equity market. The S&P 500 Index, which is a market-capitalization weighted index containing the 500 most widely held companies chosen with respect to market size, liquidity, and industry.
This publication is made available for informational purposes only and should not be used for any other purpose. This report should not be construed as a solicitation of an offer to buy or sell any security. Information contained herein was obtained and derived from independent third-party sources. Alamar Capital Management, LLC believes the sources are reliable; however, it cannot guarantee the accuracy of such information and has not independently verified the accuracy or completeness of such information.
This publication, and the information contained herein, may not be copied, reproduced, republished, or posted in whole or in part, in any form or media without the prior written consent of Alamar Capital.