This year started off with a bang for Alamar. Three of our stock holdings were purchased for large premiums. We cannot recall a time when this has occurred over our 10-year history. Given the nature of our holdings – good businesses, growing well, trading at reasonable valuations – we expect more acquisitions in the future.

The stock market continues to be driven by just a few names (FAMAA) as has been the case for the last few years. We believe the continued inflow of investor dollars into passive indices is one of the drivers of this phenomenon. The outsized investor attention on a few companies leaves plenty of fine investments trading at reasonable prices. Our goal is to fish in these unloved waters to replace the investments that have been acquired from our portfolio.

On the surface, the stock market and the bond market are signaling different future trajectories for the US economy. In this note we will dig deeper to describe what we see. To cut to the ending, we do not see a recession in the horizon despite some storm clouds.

WHAT DOES THE BOND MARKET FORECAST?

One of the market indicators we look at is the treasury yield curve. As discussed in prior writings, an inverted yield curve typically signals the onset of an economic contraction as bond investors predict lower rates in the future. Figure 1 depicts the spread between the 2 year and 10 year maturity Treasury bond. 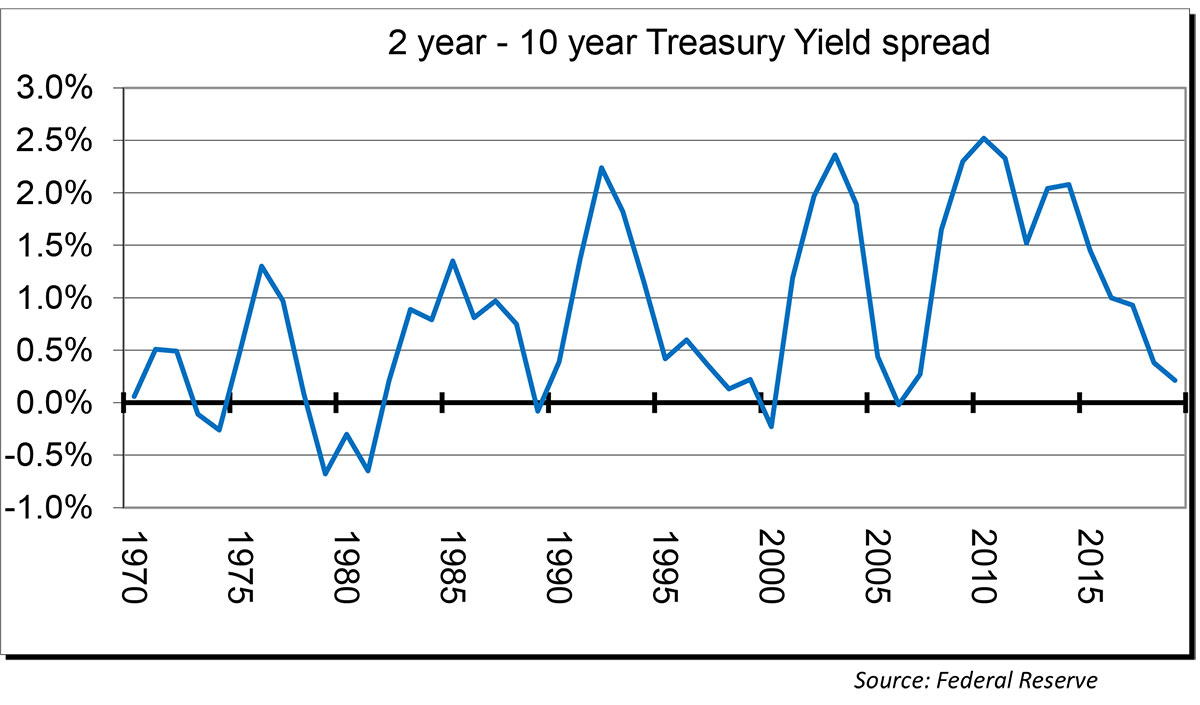 The spread is clearly pointing in the direction of an oncoming slowdown. Indeed some portions of the yield curve, such as the 2 year – 3 month spread, have already inverted. Market expectations of an imminent cut of the Fed Funds rate by the Federal Reserve could be driving this phenomenon.

However, there are other sectors of the bond market that do not portend a slowdown. One of the indicators we follow is the spread of corporate bonds – both Investment Grade and non-Investment grade – to comparable Treasuries. If a slowdown or recession is imminent, investors would demand higher yields to compensate for the increased risks. Figure 2 plots investment grade corporate bond spreads. 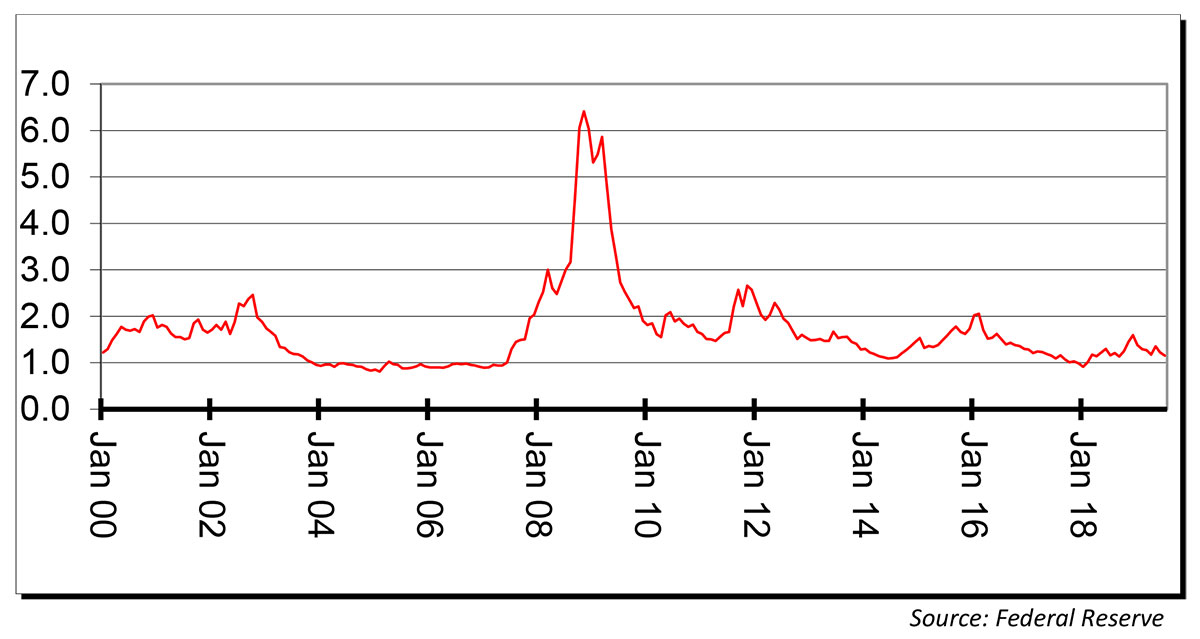 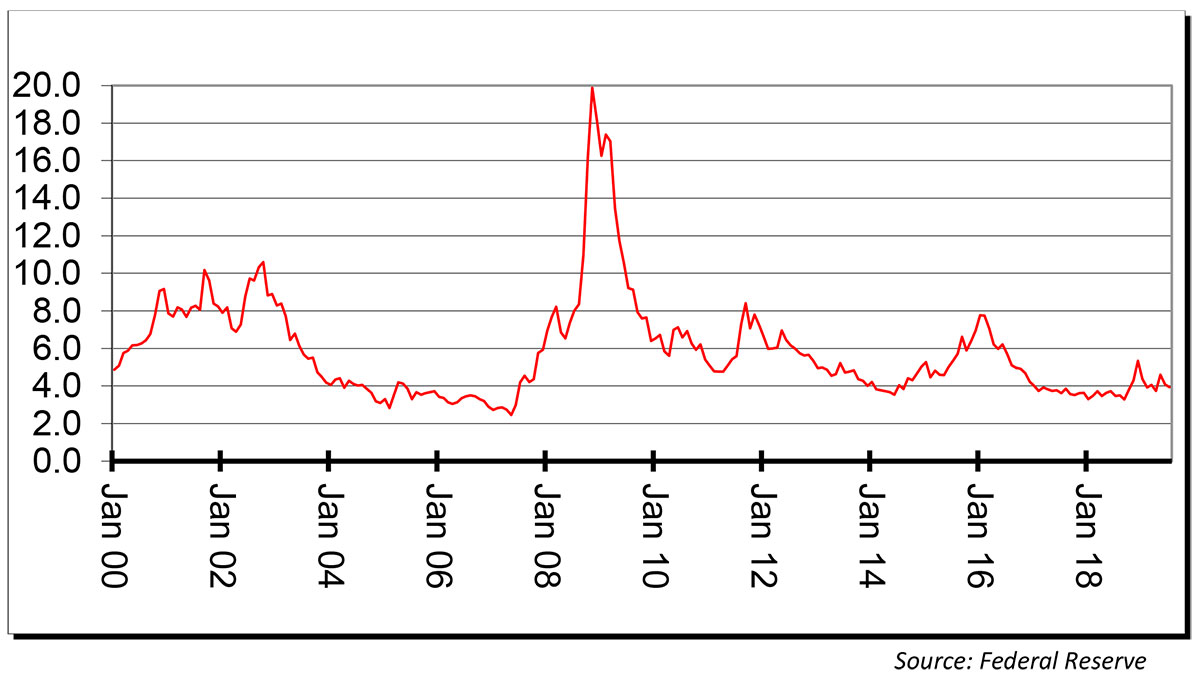 We conclude from these observations that the bond market is not signaling the onset of a recession. Instead the market is expecting one or more rate cuts from the Federal Reserve since the real interest rate (Fed Funds minus inflation) is quite high. With the inflation rate tracking towards 1.5% for the year, we think the Fed can lower short-term rates by 50bps or more, particularly since economic growth is anemic.

In contrast to the yield curve, the US stock market is close to an all-time record high as of this writing. Investors are looking past the economic weakness from trade disruptions and tepid manufacturing readings. Our internal surveys of economic conditions, particularly in housing and autos, show pronounced weakness. However, this is offset by very strong growth
in consumer spending, robust domestic air travel and double-digit growth in credit card spending reported by large card-issuing banks such as JP Morgan and Capital One.

Credit quality is very good as measured by delinquencies and loan write-offs. The US consumer is enjoying low unemployment and rising wages while at the same time inflation is rising very modestly – the ingredients of a goldilocks economy. Indeed there are now more job openings than people looking for jobs!

We expect manufacturing to rebound once the US Congress approves the USMCA, the revised version of NAFTA (North American Free Trade Agreement). Companies are increasingly moving their supply chains out of China as the trade negotiations drag on, and hopes for a quick resolution wane. If the USMCA is approved we foresee a quicker pace of manufacturing moving back to North America. While the jobs may not necessarily move back to the United States, having the supply chain closer to final consumption allows companies to react quickly to changes in demand. We expect growth in capital investment to resume as stability in trade policies is attained.

Moving manufacturing out of China to North America or other countries, while disruptive in the short-term, is beneficial in the long-term, especially when national security is taken into consideration. We expect the trade disruption to ameliorate once companies reorder their supply chains in response to the new geo-political realities.

The flood of investor dollars to passive investing continues unabated. The top 3 shareholders of many companies are inevitably Vanguard, BlackRock and State Street Global – all passive investors. The shift to passive drives a disproportionate sum of investor money to a few, well-known, mega-capitalized, popular companies covered by numerous analysts. Conversely, a large number of smaller capitalization well-managed companies are ignored despite good growth prospects. As a result valuation becomes attractive and meets our investing criteria. We expect our opportunity set to increase as the passive craze rolls on.

On the surface the bond and equity markets are singing different tunes about the economy. However, a deeper dive under the hood illuminates more consonance. Our own bottom-up analysis, after reading hundreds of company reports, depicts a strong consumer willing and able to spend and keep the economy humming.

Disclosures
The views expressed in this note are as of the date initially published and are subject to change without notice. Alamar has no obligation or duty to update the information contained in this note. Past performance is not an indication of future results. Risk is inherent in investments and involves the possibility of loss.