Strong performance in February was able to offset losses in January and March, enabling the market to continue its march higher in the first quarter. The S&P 500 managed a 1% return in the quarter, marking its ninth consecutive positive quarterly return. For our part, despite reduced expectations and a fairly high cash position, we were able to achieve a 6% net return in Q1, thanks in large part to the performance of stocks in the consumer discretionary, technology, and particularly healthcare sectors. Our annualized net return since inception (Jan 1, 2010) of 18% compares quite favorably to benchmarks, which are up around 15% in the time period.

As a significant portion of our return thus far in 2015 can be attributed to the performance of several healthcare names, we thought we would discuss the sector with this piece. Specifically, we thought that we would objectively touch on the recently implemented Affordable Care Act’s role in reducing the uninsured rate in the US, and the subsequent increase in Medicaid enrollment. Given the repercussions associated with this for the federal government, as well as the pressure it applies on states, we believe this creates an opportunity for select healthcare companies who in various ways can assist the system to be more efficient.

The Affordable Care Act (ACA) was passed into law in March 2010, requiring all Americans to secure health insurance coverage. The ACA, or Obamacare, has a stated objective to cut costs and improve the quality of care by reducing the number of uninsured. The rationale being that the uninsured do not seek medical care until it is an emergency, and often do not pursue preventative care. At the end of 2012, it was estimated that approximately 48 million Americans lacked health insurance (Chart 1). In fact, due to decreasing employer sponsored insurance coverage and consistently rising health care costs, the number of uninsured people has steadily increased throughout most of the past decade. 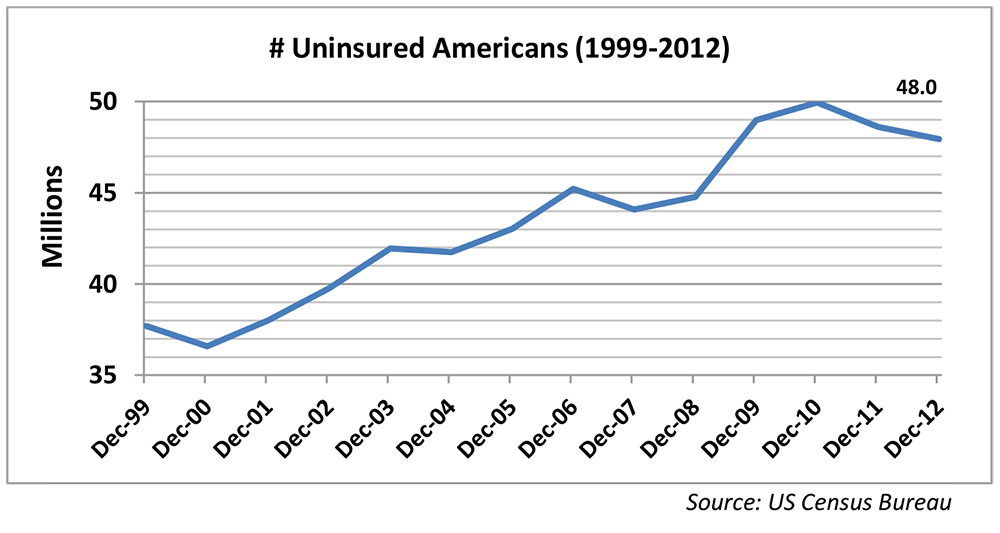 As the chart shows, the recent recession led to a steep increase in uninsured rates from 2008 to 2010 as a high jobless rate led millions to lose their employer sponsored coverage. Medicaid, the nation’s main public health insurance program for the low-income population prevented steeper drops in insurance coverage, as many Americans became newly eligible for these programs when their income declined during the recession. The Affordable Care Act effectively increased coverage to 17 million more by, among other things, expanding Medicaid to include individuals whose income is up to 138% of federal poverty level ($32,900, for a family of 4).

Early evidence suggests that Obamacare, which also allows children to remain on their parent’s plan until age 26, and removes pre-existing conditions as a means to decline coverage, has been successful in reducing the uninsured rate (Chart 2). An improving economy and job picture has also proven helpful. According to the Federal Centers for Disease Control and Prevention it is anticipated that the number of uninsured US residents fell by more than 11 million to 37 million since the passage of the ACA, the lowest measure in 15 years. According to the Congressional Budget Office (CBO), due to the ACA, the number of uninsured is expected to decline by 26 million by 2024. 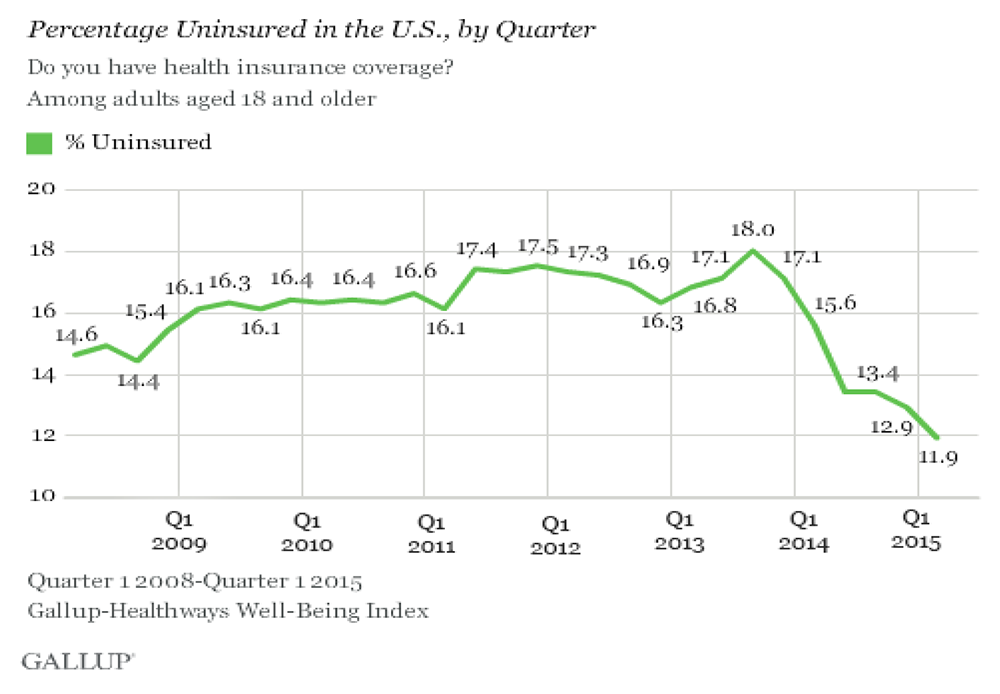 Since its passage in 1965, as a provision of the Social Security Act, Medicaid enrollment has seen consistent growth over the years. However, thanks to the ACA, enrollment increased 10% in 2014 alone (Chart 3). The CBO estimates that Medicaid enrollment will reach 93 million by 2024. 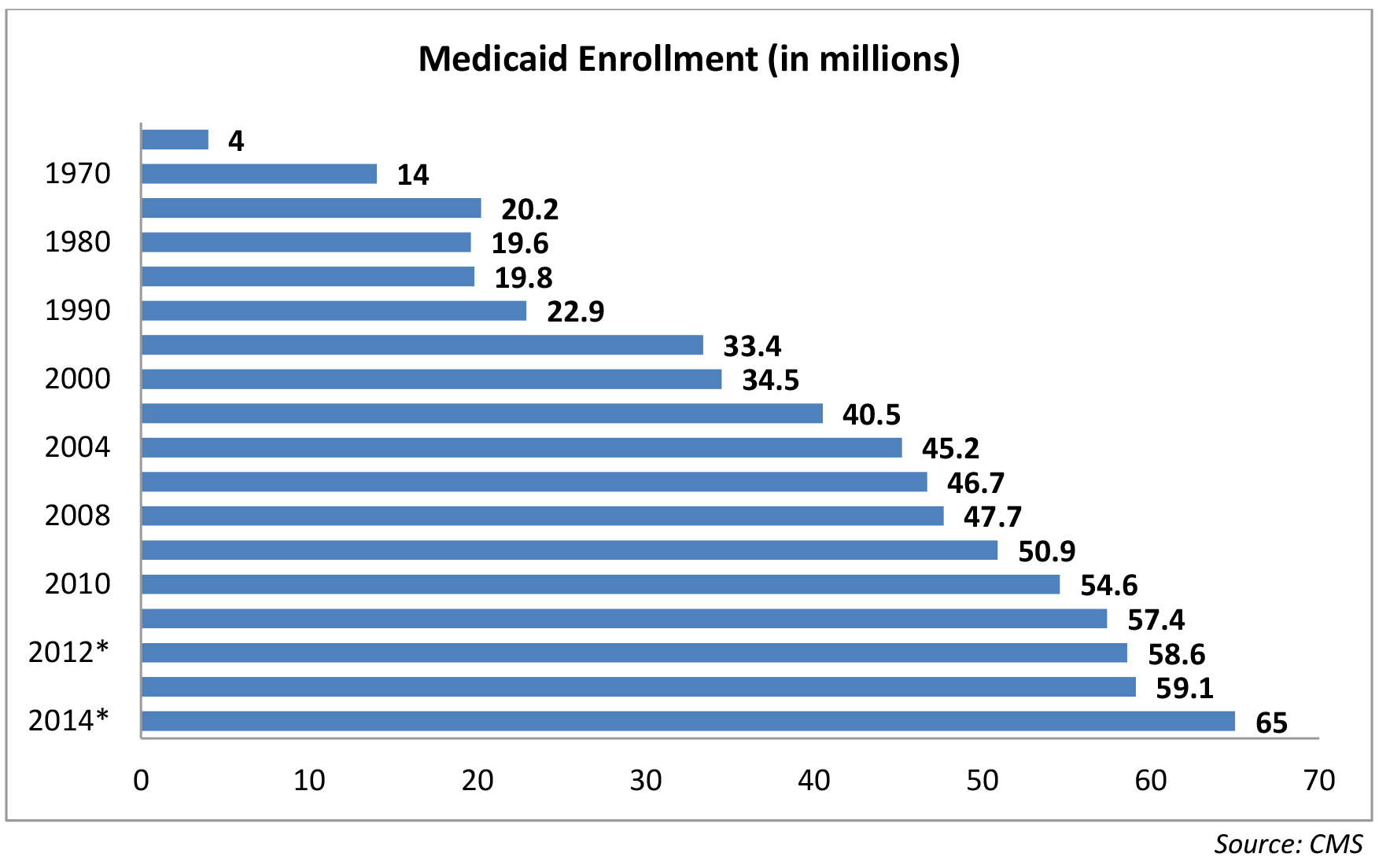 Medicaid is jointly financed by the states and the federal government and largely administered by states. However, under the ACA the federal government has agreed to cover 100% of the costs for Medicaid coverage for newly eligible beneficiaries for three years, from 2014-2016. The percentage is set to be reduced in each year after 2016, declining to 90% by 2020. Over the next decade the CBO expects federal Medicaid expenditures to grow from $299 billion in 2014 to $576 billion in 2024, an average annual rate of about 7 percent. Further, Medicaid is the third-largest domestic program in the federal budget following Medicare and Social Security. Given an ever changing political climate and the federal debt, some states have expressed concern that they may ultimately be forced to carry an undetermined increasing percentage of Medicaid costs in the future.

Originally, Obamacare required that every state expand its Medicaid program to Americans. However, in June of 2012 the US Supreme Court upheld the constitutionality of the ACA, but left the decision whether or not to participate up to the states. Unsurprisingly, this decision has fallen along political lines, with 17 states currently electing not to participate.

Many non-participating states have large uninsured populations, creating something of a coverage gap where its citizens cannot afford to purchase insurance that they are now by law required to have. Insurance that would otherwise be made free to them by the federal government. Because of this pro ACA states are seeing uninsured rates fall more rapidly while the share of the government reimbursement is quickly rising, for now. Additionally, in nonparticipating states, uncompensated care remains a big issue resulting in hospitals and doctors pushing for reforms. As a result, non-participating states are beginning to explore creative ways to get more of their people covered by a means politically acceptable to them. The fallout from all of this is difficult to project and might eventually be decided by voters in state elections.

Regardless of who eventually pays the bill, the effectiveness of Obamacare will ultimately be determined based on whether it fulfills its other promise, to reduce healthcare costs. National health expenditures increased at an annual rate of 7.2% from 1990 to 2008. Though it is true the growth in healthcare spending has slowed to 3 or 4% in recent years, as a result of a sluggish economy, the effects of sequestration, and continued increases in private health insurance cost sharing requirements. The combined effects of ACA coverage expansion, faster economic growth and population aging are expected to fuel spending growth. Health spending is projected to grow 1.1 percentage points faster than average economic growth during 2013–23, and the health share of the gross domestic product is expected to rise from 17.2 percent in 2012 to 19.3 percent by 2023 (Chart 4). 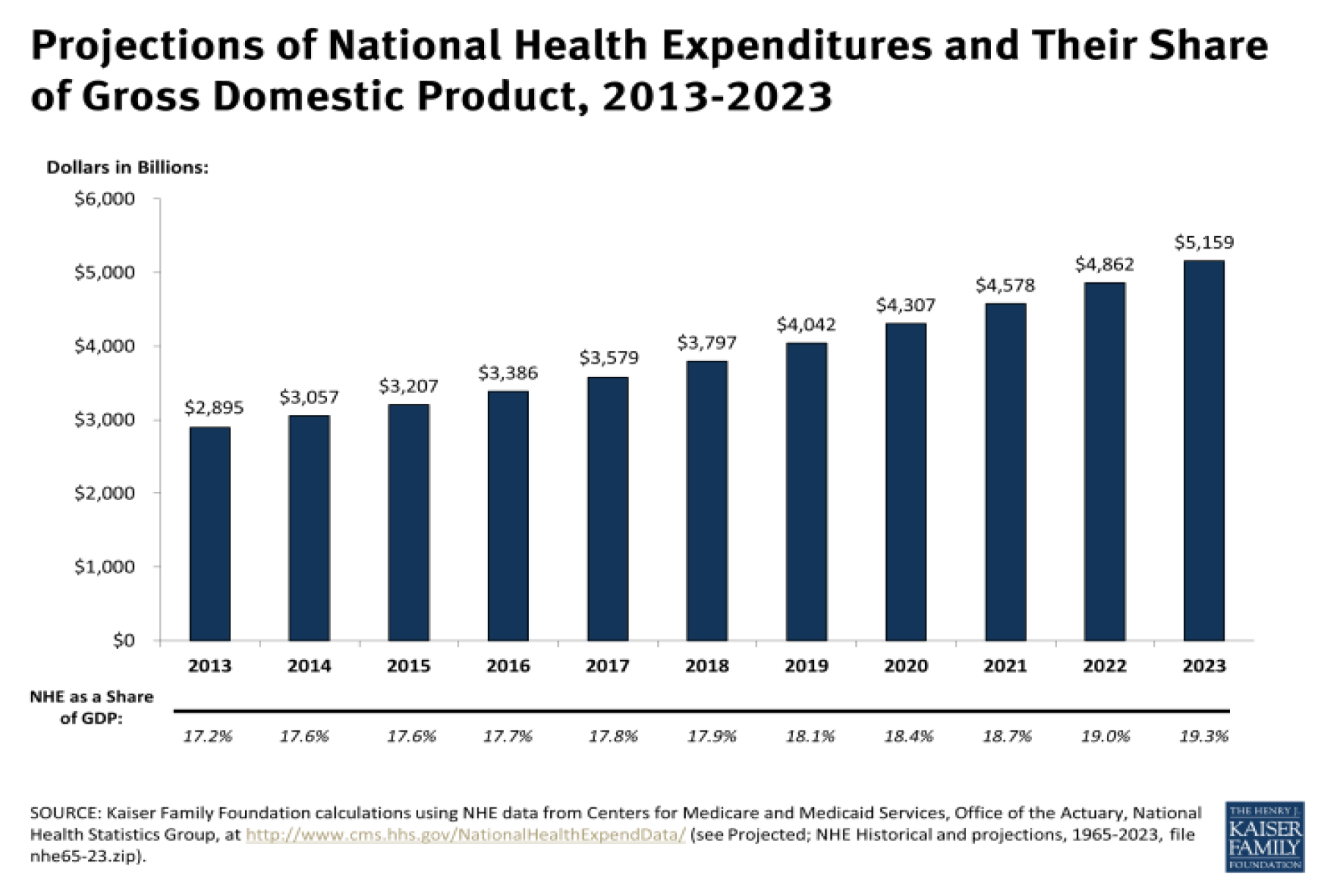 When national health care spending rises much more quickly than the economy is growing, we all feel the impact through higher insurance premiums, higher out-of-pocket costs, and eventually higher taxes to support government insurance programs. All of which, work to slow economic growth.

At Alamar, We have attempted to identify and invest in businesses that we believe are well suited to benefit from Obamacare and the recent dramatic increase in Medicaid enrollment and that strive to reduce costs. For instance, programs that help states cost effectively administer Medicaid and other plans have proven attractive candidates. As have companies that provide and encourage preventive care and/or enable procedures to be performed away from costly hospitals. Investments in several of these businesses have seen significant revenue growth, profit increases and multiple expansion in recent quarters. If you are a client, you might have noticed that we have recently taken some significant gains by trimming some of our positions, as market expectations have grown a bit too robust. However, given the relative size of the healthcare problem, and the significant need to find solutions, we remain optimistic on the space as an investment opportunity going forward.

Thanks for your continued consideration –