With the close of the 1st quarter the S&P 500 achieved a bumpy 1.8% return, while the Russell 3000 index was up 2.0%. For many investors, due to the heightened volatility and a rough January, it might have felt as if the market was actually down in the quarter. Particularly, given the outsize gains achieved last year!

For our part, Alamar was basically flat -.13% in Q1. The primary contributor to our under-performance was a significant pullback in a couple consumer staple names, both of which we have held since the inception of our firm and have previously rewarded us with outsized gains. Additionally, safe haven utilities stocks proved the big winner in the quarter, up nearly 10%, while the defensive health care sector came in second achieving a, just under, 6% Q1 return. Alamar remains under weight to both these sectors of the market, further impacting our short-term performance. The chart below provides a historical comparison of our performance since inception net of fees.

We are pleased with our results thus far. However, we think that much of the improvement in the economy is already reflected in stock prices, and we do not expect to experience the same level of returns going forward, particularly in the near term. Further, though we do not believe that we are in “Bubble Territory” with respect to the overall markets just yet, we have noticed what appears to be bubble like activity in certain market segments.

Most notably we think we are witnessing this phenomenon in social networks, where it is truly incredible how quickly value seems to be created today. For instance, in this past quarter Facebook (FB) a ten year old company with a market capitalization of $150 billion acquired 4 year old instant messaging company WhatsApp, with 55 employees and very little revenue, for $19 Billion. This was not Facebook’s only acquisition in the quarter, as they also purchased 2 year old virtual reality headset maker Oculus VR for $2 Billion. Oculus was founded by a 21 year old, has no revenue and has yet to ship a product. Both deals were heavily financed with Facebook stock and are reflective of a world that is moving awfully fast.

With this quarterly writing we have elected to focus on another area of the market that has experienced a dramatic recent run up – digital currency. We thought we would talk about Bitcoin, where value has literally been created out of thin air.

The Bitcoin network was conceived in 2008 and launched anonymously in 2009 by a programmer(s) who used the pseudonym Satoshi Nakamoto. Adding to the intrigue, the true identity of Satoshi and the other programmers involved on the project remains unknown to this day. What they developed was really two things; a new payment system and a completely digital form of money.

The unique element of their payment system is that it is a decentralized peer-to-peer payment network that is powered by its users and does not require a central authority or middlemen. This is a fairly revolutionary concept in the payment space, because it enables the transfer of ownership from one person to the next without the need for a trusted third party. This means that Bitcoin has basically cut the banks, the pay pals and the credit card processors out of the equation, by dramatically reducing the cost of the transaction.

Without trying to get into too much detail, the Bitcoin network is maintained by a world-wide network of participants who contribute computer processing power to validate transactions. These participants verify each bitcoin transaction and record it in a massive and public ledger called the “block chain”. The bitcoin protocol is completely open-source, meaning that all transactions are broadcast publicly, so anyone can examine the source code, or view a transaction between two bitcoin addresses. This differs from the current system, where typically a bank or another party resides in the middle of the transaction and, for a fee, verifies the identity of each party, confirms that funds are available, and then enables the transaction. Interestingly, and not without controversy, in the Bitcoin payment system the identity of each party involved in the transaction is somewhat anonymous. Similar to email, each Bitcoin user is issued a Bitcoin Wallet, or ID address.

Now, in the Bitcoin system the computers that sit in the middle of the transaction do not charge a fee, but are rather issued bitcoin currency for their effort in validating transactions. In Bitcoin parlance this practice is called “mining” and the computers are often called “miners”. The use of this term is probably not a coincidence. The miners are essentially compensated for their role in the upkeep of the block chain. The total quantity of bitcoins is predetermined and capped at 21 million, with approximately 12 million already in circulation. Also, the system is designed such that bitcoins will increase at a continually decreasing rate. Currently, a winning miner is rewarded with 25 bitcoins which occurs roughly every 10 minutes. When all 21 million bitcoins have been allocated, it is anticipated that miners will be compensated by a small transaction fee. Once created, bitcoins can be traded on currency exchanges or used as money to purchase goods and services from merchants that accept it.

Just over a year ago you would have had a hard time finding a merchant that accepted bitcoins. Today, according to Coinbase, a company that issues Bitcoin Wallets, over 30,000 businesses now use it! To put this in perspective, you can now use bitcoin to attend a Sacramento Kings basketball game, or purchase a car. These merchants see value because Bitcoin reduces their transaction costs from as much as 3.5% to as low as 1%.

It is important to keep in mind that bitcoins as a currency carry no real intrinsic value, as they are not backed by any government or financial institution. In fact, this is probably a part of their allure for the libertarians amongst us. They are valuable because the people, not the government, say they are valuable. That value is simply predicated upon their scarcity, limited supply, and usefulness. This is different than other fiat currencies which are backed by the legal system, or commodities like gold* that have some intrinsic value via their application or appearance. However, bitcoin and gold actually have quite a bit in common – So much so, that some have struggled to determine whether the currency might more properly be classified as a commodity.

However, the similarities stop when you look at their recent performance (See Figure 2). 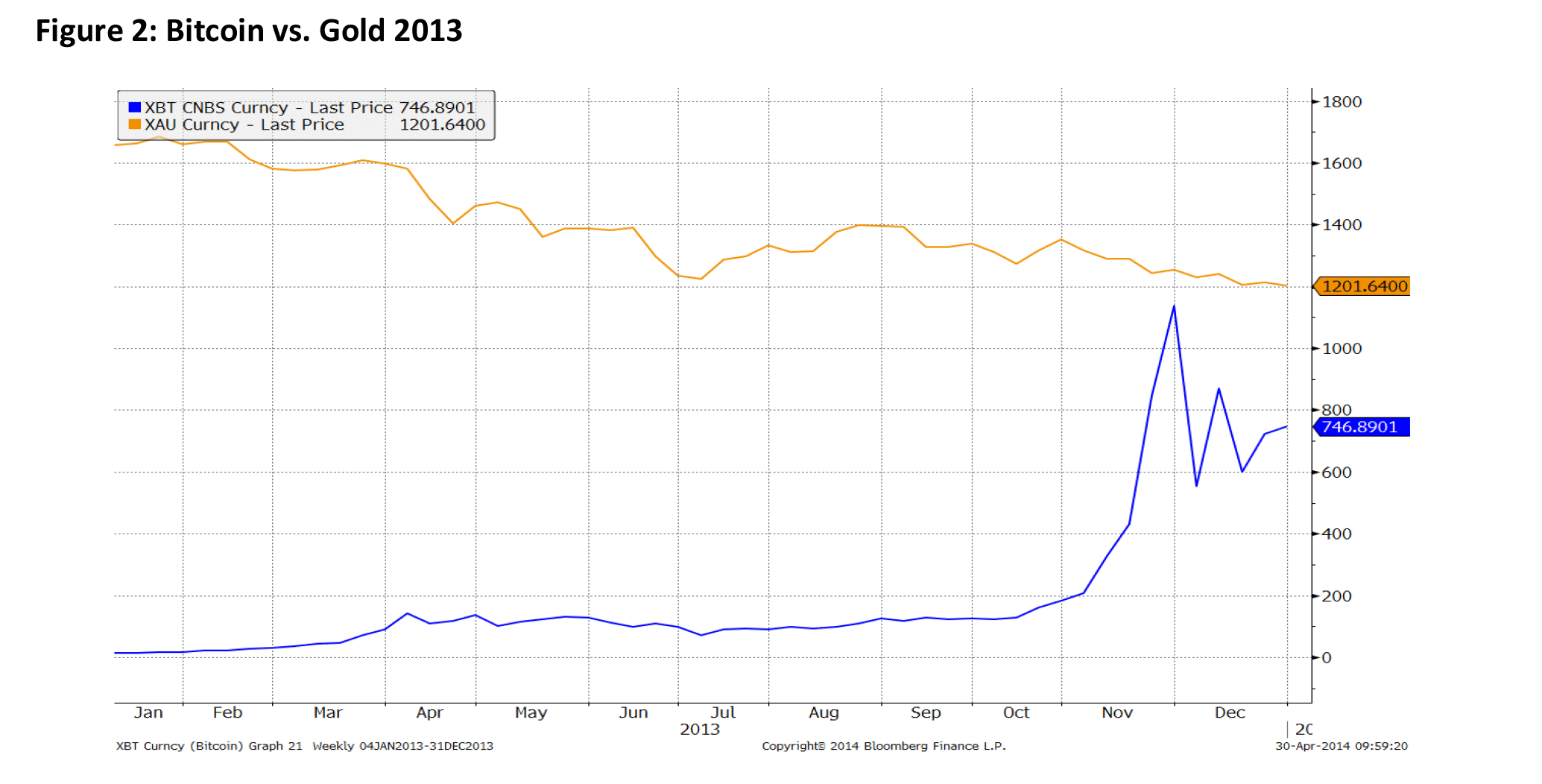 Bitcoin proved to be a winning investment in 2013, posting an unbelievable over 5,000% return from its Jan 1 price of $13.50 to reach $747 at the year’s close. In fact, in late November, the price of a bitcoin approached that of an ounce of gold, reaching in excess of $1,200. Meanwhile, gold struggled during the course of ‘13. Bitcoin’s performance is truly remarkable when you consider that it traded for as little as 5 cents as recently as July 2010. Barring the internet and the tulip craze of the 1600s, this dramatic creation of value is nearly unprecedented. Whether it is sustainable or not is another question.

*Alamar held a small position in gold in the past through the GLD index.

Bitcoin has been able to endure a series of challenges and obstacles over its 5 year history. However, some setbacks appear to have caught up with them near the close of last year. First, China, which accounted for nearly a third of bitcoin volume, recently banned its banks from bitcoin transactions. Next, this January the high profile CEO of the exchange Bitinstant was arrested for money laundering in connection with the website Silk Road which used bitcoin to sell drugs and other illicit activities. Then, in February, the world’s largest bitcoin exchange Mt. Gox was hacked. This resulted in the loss of 850,000 bitcoins valued at over $500 million! Mt. Gox, based in Tokyo and responsible for 80% of bitcoin volume at the time, was forced to file bankruptcy shortly thereafter.

All of which has resulted in a 60%+ correction for bitcoin from its peak to a current price under $450 (Figure 3). It also leads us to believe that more regulation and oversight is on the way, which will come at a cost. Several states in the US have already expressed concern about bitcoin. Maryland’s Attorney General recently warned about it, and West Virginia Senator Joe Manchin has suggested that it should be banned. We suspect the road going forward will remain bumpy. Then again Bitcoin has accomplished a lot in short period of time so virtually anything is possible. The charts below show a comparison of bitcoin against gold over different time periods. 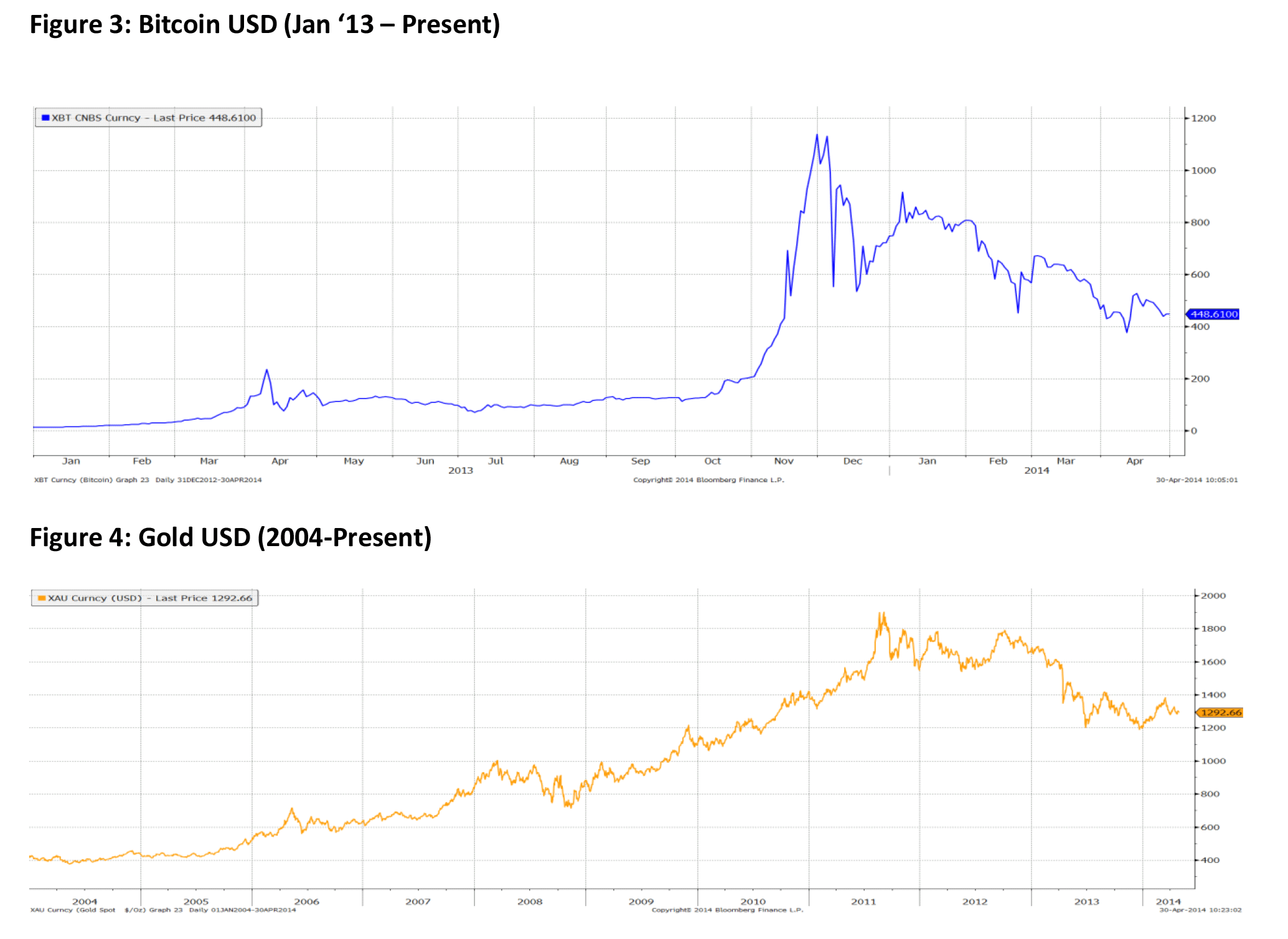 We find it striking that the performance of the two look so similar, given the dramatic difference in the time periods. Equally dramatic to bitcoin’s gain has been its recent pullback, losing about 10 years’ worth of gold’s gains since its November peak

This extreme volatility has many questioning whether bitcoin truly acts as a store of value. For this reason, it is unlikely that merchants today who accept bitcoin are staying in it very long. It is more likely that they are electing to use the payment system at the expense of the currency, which further discredits its usefulness.

As we all know, manias often last longer than many would have first expected. In the end, thanks to gravity, all things return to earth.