The first quarter of 2013 provided another attractive return for stock investors. With a 10.6% return on the quarter for the S&P 500, the bull market that dates back to March 2009 stretches remarkably into its fifth calendar year. Alamar achieved a 10.2% return in Q1 2013 for our All Cap strategy. We are pleased to report the strategy is now up 18.1% annualized since our inception January 1, 2010 compared to a 13.5% return for the S&P 500 and a 13.9% return for the Russell 3000, an index comprised of slightly smaller market cap names.

Since the close of the first quarter, the market continues to churn higher, with both the S&P 500 and Dow reaching new all-time highs. Meanwhile, first quarter earnings and anecdotal macro data reveal a cooling economy, while 10 Year US Treasury bonds have fallen to just 1.7%. This has led some to speculate that the recent enthusiasm for equities is more reflective of anticipated additional coordinated central bank stimulus than a growing and healthy economy. This is a reversal of course from discussions of belt tightening by the Fed just a couple of weeks ago.

Moving on to corporate earnings, the Q1 season so far has shown many US companies struggling to generate meaningful revenue growth. For example, according to Factset, of the 271 companies that have reported earnings to date for the quarter, 73% reported earnings above the mean estimate while only 44% reported revenues above the mean estimate. This is really nothing new. Since the trough of 2009, S&P 500 operating earnings have risen almost 100% from about $65 to almost $115, while revenue has increased just 26% over the same time period. With so little pricing power in the overall economy, the only route to profit has been cost cutting. As a result job growth and wage increases have been anemic, while productivity gains and profit margins reside at all-time highs. Despite this headwind, as well as a recent payroll tax hike, and higher gas prices, the consumer has proven resilient, increasing spending in Q1 to offset cuts in government spending. Not surprisingly, this increase has come at the expense of savings, bringing into question its sustainability. All told, US GDP grew a modest 2.5% in Q1, while China climbed 7.7%, both missing analyst estimates.

Given the strong recent out-performance in the more defensive sectors of the market, we thought we would take a look at it with the remainder of this quarter’s commentary.

Figure 1 below shows the performance of the S&P 500 by economic sector in the most recent quarter and over the last several years. What is telling to us about this data is the extent of the outperformance amongst non-cyclical stocks. These sectors such as Health Care, Consumer Staples and Utilities, are viewed as being defensive in nature and something of a safe haven for risk-averse equity investors. Historically, when defensive sectors lead the market, it has tended to be a sign of a top in the making and a reflection of a slowing economy. However, in the case of Health Care and Consumer Staples, these sectors have not just out-performed the market in the most recent quarter, but over the entire time period! At the same time, cyclical names like Materials and Technology, typically associated with a recovering economy, have continued to lag. 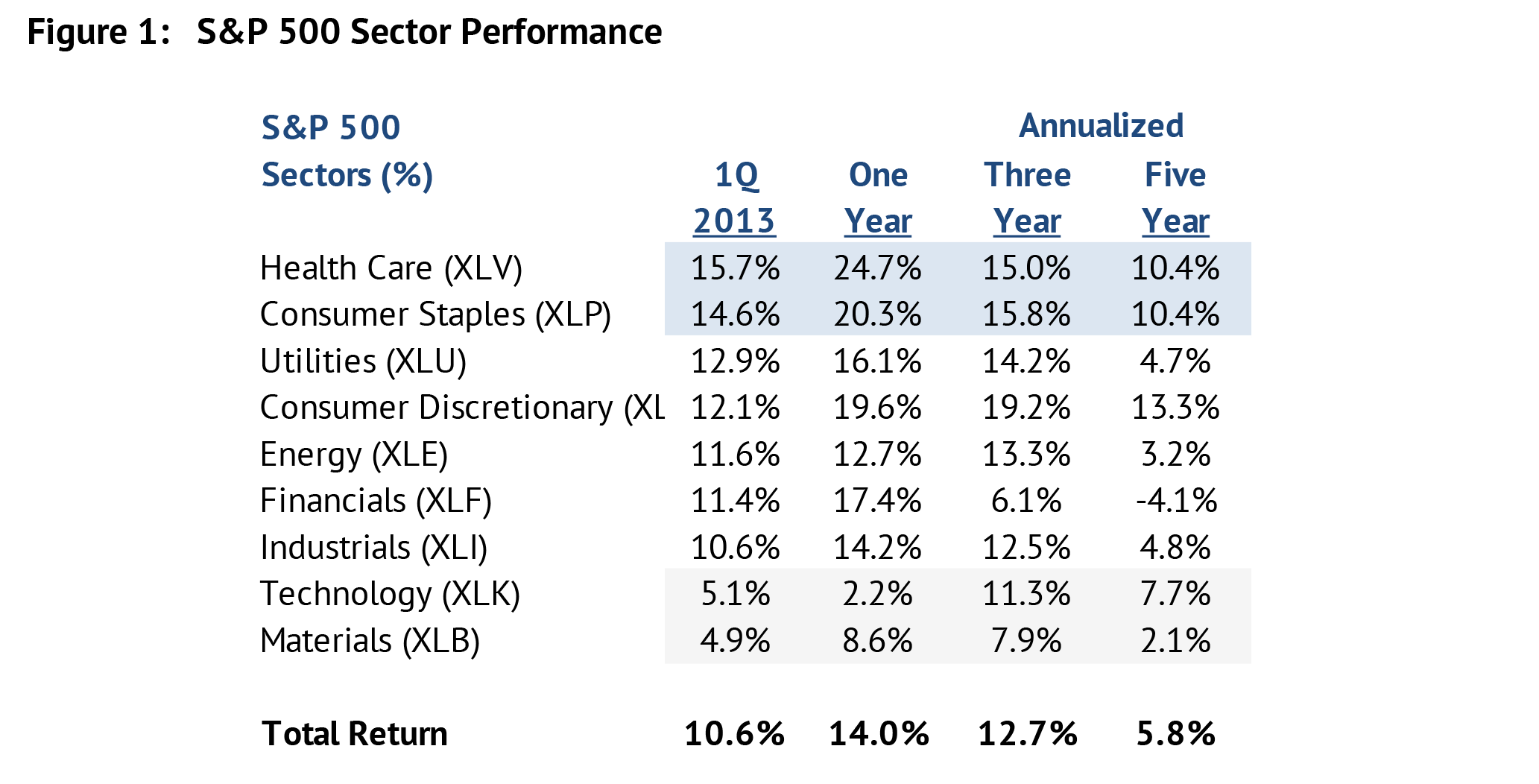 This is clearly a sign of an economy struggling to get off the ground, but we believe it can be attributed to investor behavior as well. Specifically, income hungry investors are tip-toeing back into the market through stocks perceived as being less risky. Sensing an opportunity, Wall Street appears to have reacted to this through the creation of a plethora of “low volatility” funds and ETF’s with heavy exposure to defensive areas of the market. Allocations to these funds then bid up the shares of the companies they own and valuations increase. Let’s get into this in greater detail.

Figure 2 below provides mutual fund flows dating back several years, and indicates a measure of enthusiasm for stock vs. bonds. It also compares the performance of the two asset classes. The data clearly shows a shaken investor exiting equities for the safety of bonds starting in 2008, and earning a substantially lower comparative return since. 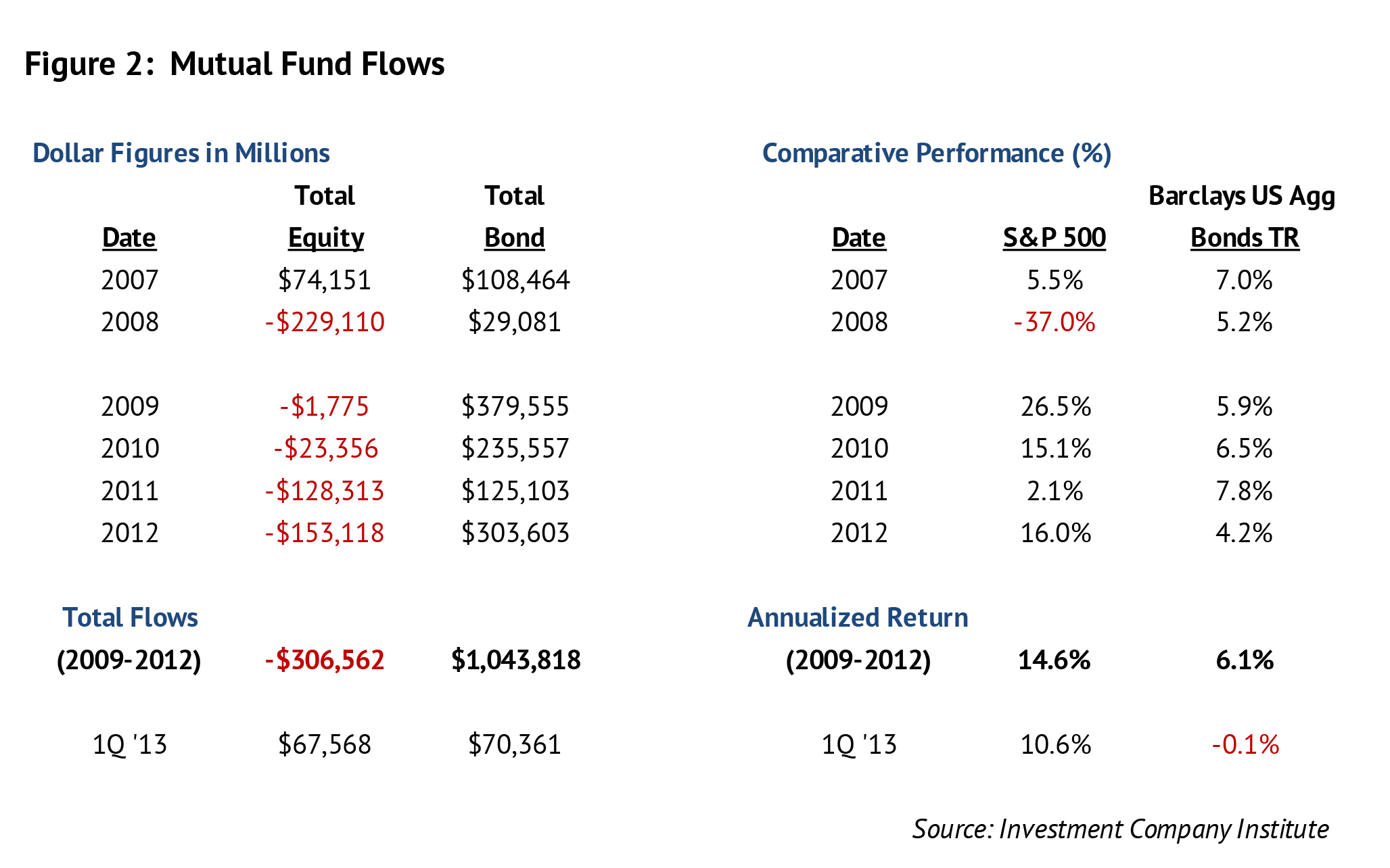 The last 4 years has seen an incredible $300+ billion in outflow from equity funds and an over $1 trillion inflow to bonds. Figures on ETF flows would offset these numbers somewhat over the time period, but we use mutual fund flows here because we feel they still best describe retail behavior.

The data above also addresses the media’s current fascination about an anticipated “Great Rotation” out of bonds and cash into equities, which appears to be taking shape. In the first quarter, investors who have missed out on much of the rally and are frustrated with the low returns available in cash and fixed income, have finally increased allocations to equities, chasing the performance that has been generated there.

We believe it is likely investors who have stayed the course, or have allocated to equities since the ‘08 crisis, have done so by and large cautiously and the performance of defensive stocks is indicative of this. An area where this phenomenon can be measured is in the growing ETF market. For instance, a recently established Low Volatility ETF fund provides a prime example of the current appetite for non-cyclical stocks. The Powershares S&P 500 Low Volatility Portfolio (SPLV) has gathered over $5.4 billion in assets since it was formed in May 2011! Figure 3 below shows a brief overview of the fund and its positioning. We chose an ETF here because we feel it best represents Wall Street behavior. 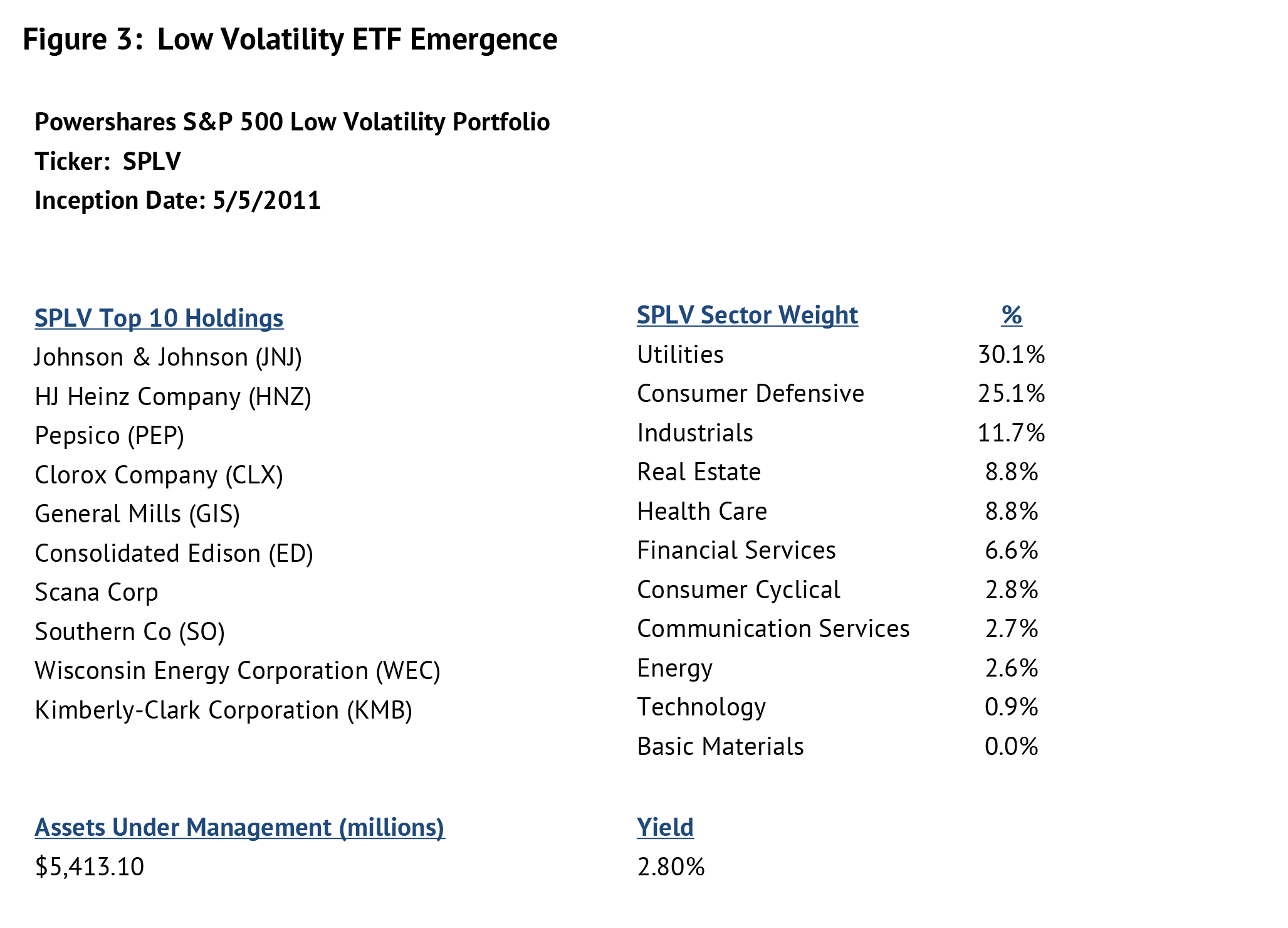 As you can see, over 50% of this fund is currently allocated to Utilities and Defensive names, many of which now trade at over 20x earnings. Just as mutual fund investors may be a little late to the party with their return to equities, risk-averse ETF investors may also end up disappointed if there is a sector rotation away from defensive ones and cyclical sectors start pacing the market. The question now is how much longer this trend can continue. Wall St. itself has never been known as a trend setter and the timing and establishment of this fund and others like it is itself a bit curious, but profitable nonetheless.

For our part, we continue to focus on identifying and investing in companies that meet our criteria for investment – solid businesses with attractive growth prospects trading at reasonable prices.

During the first quarter two of our investments were acquired for hefty premiums. One, Life Technologies Corp (LIFE) was acquired by another public company, Thermo Fisher Scientific. The other, Gardner Denver Inc. (GDI) was acquired by private equity firm KKR. Ironically, both LIFE and GDI would be classified as being more cyclical in nature. It is likely that this will continue in the future as companies struggling to generate meaningful organic growth acquire it through the purchase of businesses with clean balance sheets and decent growth prospects. These types of companies are all the more appealing since they have not been attracting a lot of interest in the public markets.